[NOTE: I’D RATHER CHOKE THAN BE A QUITTER has been moved to The Iron Factory, 118 Fontain Street] 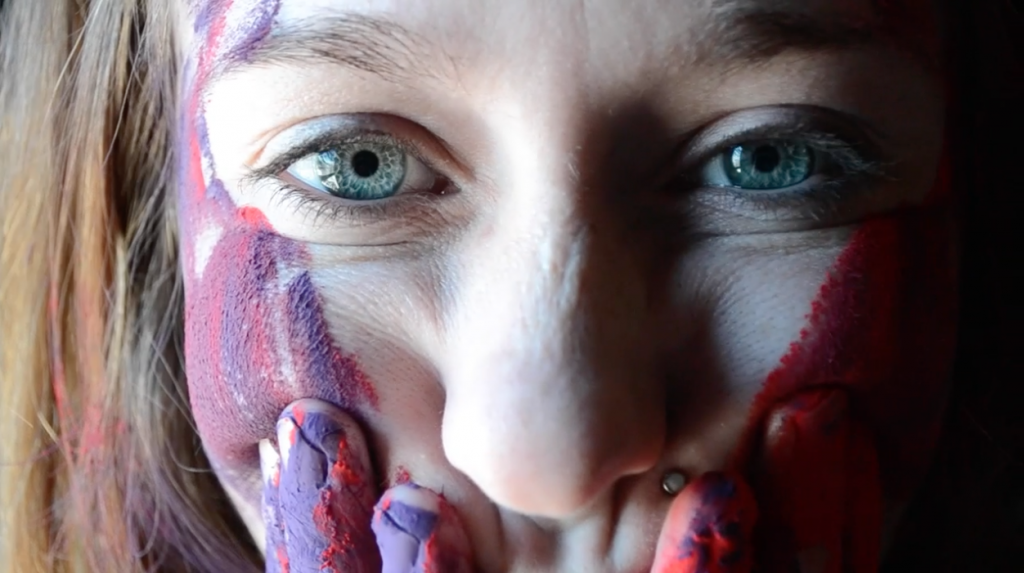 Whalen’s prints are at home in the industrial apocalypse-chic of Old City’s 1fiftyone space. Her pieces hang from clotheslines which crisscross the 5th floor space, or else are simply secured to the wall by massive nails, punched through the bare canvas and into wood or the cement between the bricks. In her paintings, pasty figures sprinkled with blood coagulate into human form, with teeth and gums here, a gnarly hand—or claw—there, and always eyes somewhere. In How U Last Saw Me, which is affixed to the brick wall by long naked nails, that face is vulnerable, melancholy, naked, molelike. In Mother Fade, which is painted on a wrinkled square of plastic tarp that hangs from a clothesline, the figure is angry, hurt, and lashing out, with something yellow protruding between thick parted lips and jagged teeth at the end of a snout, at the top of which are eyes twisted with emotion.

We go downstairs to the 4th floor to see the performance. Last December, the group presented a brief snippet under the same title at FringeArts’ Scratch Night. Under neon blue and purple lights, the three dancers lashed out in fleshy ragesick elaborations not so far removed from the raw, twisted emotionality of Whalen’s deconstructed characters. The attempt to form a graceful movement was always at odds with the need to vomit. And there was plenty of vomiting. Eight high-octane minutes of thrashing under brilliant lights while puffs of powder built a continuous cloud, making the air thick and the light concrete.

The final product of I’D RATHER CHOKE THAN BE A QUITTER is much more restrained. It plays like a strange, unpredictable, colorful music video. The thrashing and vomiting, the rage and despair which is crushed into two dismembered dimensions in Whalen’s artwork, is sublimated. At the start, one dancer enters with deerlike temerity, long legs and pointed toes, little wobbling steps. Two performers, in brown cloth suspenders and ties, slouch in armchairs, watching as a third tidies up crumpled newspaper.

One performer begins a mechanistic stagger across the stage, one hand held forward, opening and closing like scissors as the body bobs with each step. Some force draws her forward, snipping invisible strings out of the air as she traverses the space. Meanwhile, another executes graceful, balletic dance from one wall to the other.

Their gaze is forward, disconnected, when they touch there is always a mechanism for disconnect. One leaps across the floor, comes near another who grabs her hands and holds. The dancer bends, raises a leg, swings like a podium, and, her motion reversed, heads back the way she came.  The rage is present in their deeply ringed eyes and their heavy forms which slump in armchairs, staring forward, but it’s the rage of the homestead, the anxieties which lie under the breakfast coffee and newspaper. It struggles for expression but slips into the staggering marionette stride instead. Shakai Mondai’s haunting Bad thickens the air. Her warm human voice is muffled by electronic harmonizing, grace struggling against a cold, pulsing beat.