The Lady Hoofers, Philly’s premiere all female tap ensemble, debuted their first ever short film, DOLLAR, on Saturday night. Leading up to the premiere were six live performances featuring members of the ensemble. These performances were varied and unique: two were a capella, two were solos, and two were longer suites featuring the entire company.

The Lady Hoofers have done an incredible job of finding great tap dancers in the Philadelphia area. Every dancer committed a wealth of energy and skill to the performance. Standouts include solo pieces performed by Kat Richter and Johanna Lockwood, and apprentice dancer Emily Marshall’s high energy performances, particularly in the a cappella “Nothing but Noise”.

The improvisational sections in “Unchained Suite” were some of the most purely entertaining bits of the night. The Hoofers seem to be at their best when just having fun and letting their strengths as dancers shine. Meg Sarachan got a big laugh after playing as if she would do a back flip at the end of her solo, only to laugh it off as a joke. Their tendency to play to the audience really helped the entertainment factor of the night. 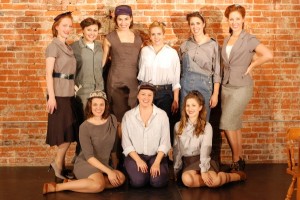 DOLLAR was clearly the focus of the night though, as these pieces seemed to be organized to prepare the audience for the film. The night’s musical selections were primarily jazz or big band numbers, and DOLLAR follows that theme with the jazzy beats of Aloe Blacc’s “I Need a Dollar”. The film is based around a vintage 1940s concept about working women during World War II. We start before the dance, with choreographer Becky Mastin typing on a typewriter. The metallic clinks of the machine turn into a steady beat segueing into Blacc’s tune.

Here we meet our dancers: Half play factory workers, while the other half play secretaries. Tension builds between the two groups as the secretaries feel they’re the superior class, and the factory workers respond to prove their worth. The conflict reaches its peak in a clever yet all too brief dream sequence of sorts, where both groups imagine themselves intermixed, clad in black dresses. After the dream, both groups dance together, stronger for finding their common bond as women in the workforce. The film ends again with the typist, underscoring the dream aspect of the story.

Director Meg Sarachan stated that the film is meant to mesh the “golden age” of tap with the modern era, in an effort to point out how many women’s issues from the 1940s still exist today. She absolutely succeeds at this message; even without her additional commentary the film makes its message clear. My biggest nit to pick here is that I just wish there was more of it.

“Dollar” is an interesting film that is expertly danced and shows a clear vision in its design while not going quite as far with its subject matter as I would have hoped. In the post-show Q&A, Managing Director Katie Budris mentioned having to cut the song down from its original five minutes to a more manageable two and a half minutes. I actually wish they had shot for the full five minute song, because I wanted this film to go so much deeper. To be clear, everything here works, but if the Lady Hoofers pushed their concept just one layer deeper I think they would have a truly compelling piece of work that could stand on its own. The tension between the “classes” of women could be strengthened and therefore the emotional payoff of their union would be stronger too. As it stands, DOLLAR is an excellent example of how to make dance on film work, and I think the Lady Hoofers should be proud of their first outing.

The Lady Hoofers plan to release DOLLAR on their website in the near future. Check it out and let me know how you feel about it!