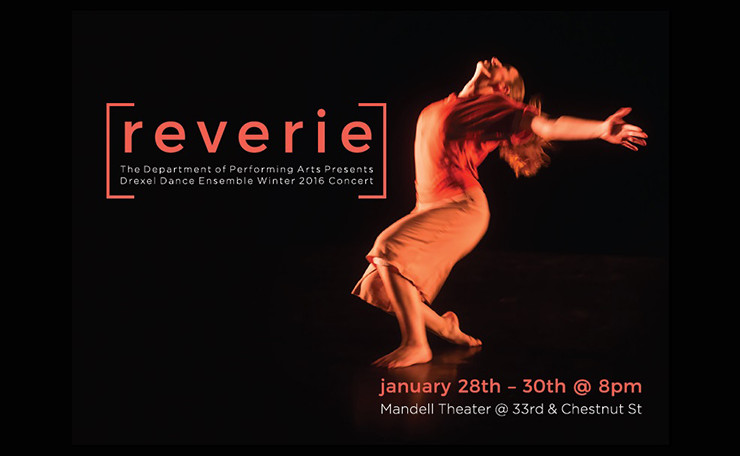 There is some debate about whether student recitals in a university setting should be reviewed professionally. There may be some merit to the argument that these are not professionals, and that it may be unfair to judge them by professional critical standards.

Last Thursday I ventured out to Drexel University to view the Drexel Dance Ensemble’s winter concert, REVERIE. This was an anthology showcase, where most of the choreographers and all of the dancers were students. I was pleasantly surprised by the level of talent on display; in a few instances, if I hadn’t been told they were students, I wouldn’t have guessed it. This is not to say there wasn’t plenty of work by young people still struggling to reach artistic maturity, but neither did anyone embarrass themselves.

Opening the evening was “Trance,” choreographed by Coralie-Michele Francois, who explored the theme of hypnosis. One dancer played the role of hypnotist, acting as sort of puppet-master to the ensemble. While Ms. Francois had good control over a large number of dancers, there was perhaps too much restraint in a piece ostensibly about loss of control. While at times the choreographer seemed to be reaching for that loss of control, her all female dancers seemed tentative, lacking the strength the piece needed.

Next up was “It has been a beautiful fight. Still is,” choreographed by Gina Quinlan. The by-word for Ms. Quinlan’s piece was “grace.” Her dancers, clad in costumes reminiscent of Grecian robes, flowed (almost flew) across the stage, reminding me of the statues of the Nine Muses atop the Parthenon. It was all very pastoral, and quite nicely done.

Abigail Nolin’s “I’m Blinded, Humbled, It Tethers Me to You” was perhaps the piece most influenced by classical ballet traditions. There were lots of leaps and spins and plie´s. I had the thought that Ms. Nolin ought to have required her dancers to wear toe-shoes so that they could have danced en pointe.

For a distinct change of pace, we got Mary Elizabeth Stickney’s “When in rem…” which drew on rely 50’s and 60’s rock-and-roll music for its inspiration. Following the beats of Wilson Pickett, Chuck Berry, and the Shirelles, the girls cavorted about the stage as if they were at a slightly naughty sock hop. While the choreography was of the basic twist and groove variety, it was danced with an exuberance that was infectious.

Intermission was followed by “Conflicted” by Shaness Kemp, the program’s single guest choreographer with professional credentials—and it showed. This was an artist with a mature, fully formed vision, executed with imagination and skill. The scenario was of people trapped in a nightmare, striving to escape, yet ambivalent about what they may face when they awaken. The choreography was jerky and precise, reminiscent of similar scenes in movies with characters moving unnaturally through nightmarish dreamscapes. The choreography was obviously very demanding, but the student dancers rose to the occasion.

Alicia Tom’s “Catch & Release” was another change of pace, a solo work on the theme of longing, pursuit and loss. Ms. Tom danced the piece herself – perhaps not the wisest choice, since directing oneself is full of pitfalls for even the most experienced of performers. But she managed to avoid the worst pitfalls, doing a relatively good piece of work.

As a rule, it’s not good to make generalizations about a multi-choreographer program, but I’m willing to make a couple. One is that it is clear that the student choreographers have yet to grow into their individual voices. There was a certain similarity of choreographic style (excepting Ms. Kemp’s singular work) that gave the program moments that bordered on tedium. As they continue to grow and mature as artists, the student choreographers should be able to take the uniformity of what they’ve learned in school and develop greater individuality of style and vision. Also, there was a certain lack of adventurousness that I’m hoping more experience and confidence will take care of. Finally, it should be noted that this was an all-female program. While I have no problem with that, per se, a couple of the pieces would have profited greatly by the addition of some masculine strength to the choreography. Compliments should also go out to lighting designer Dominic Chacon, whose professional lights gave the program a uniform sheen while at the same time giving each individual piece its own uniqueness of atmosphere.

REVERIE was my first university level student dance concert, and overall, the level of artistry I saw onstage, while underdeveloped at certain points, was still serious and professional to merit professional feedback.