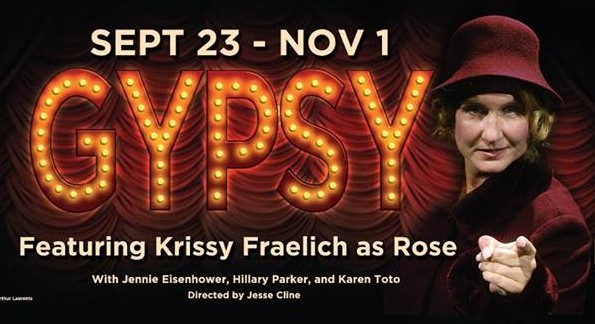 Krissy Fraelich is terrific as Mama Rose in the Media’s production of GYPSY. She musters all the moxie and bravura necessary for the role while never seeming anything but real and honestly motivated.

GYPSY is an often produced classic for good reason. Arthur Laurents provides a strong story, Jule Styne’s score is one the liveliest in the Broadway canon, and Stephen Sondheim’s lyrics are not only brilliant, but they presage the genius and innovation that was to come (and continues to this day).

Rose is the centerpiece of GYPSY, but the glory of Jesse Cline’s production for the Media is that Fraelich leads an illustrious cast. There are plenty of fireworks from Jennie Eisenhower, Hillary Parker, and Karen Toto as the Wichita strippers; Avery Sobczak as a dashing Tulsa;  Portia Murphy as Baby June; Elisa Fucich as the sardonic Miss Cratchitt; Megan Rucidlo as Agnes/Amanda; and the sparking Anna Giordano as Miss Gypsy Rose Lee.

Early in the play, Herbie (Kelly Briggs) describes Rose as “looking like a pioneer woman” embarking on her next conquest. This image accurately denotes Fraelich’s performance. Her Rose is always thinking about how to maintain and promote the vaudeville act that features her daughters, and never willing to abandon any hope or give up on any of her numerous dreams.

Despite this ambition, she is never glamorous or sophisticated but always the Seattle woman who plugs away to get everyone working, fed, rehearsed, and houses. This normality makes her pushier, dreamier side more pronounced and frightening. Rose is a worker, a promoter. She has no airs. She doesn’t change as her act becomes more successful and is on the brink of cracking New York. She’s everywoman with a greater yen to be on top or have her daughters be stars.

Fraelich doesn’t always give a lot of color to her line readings, but she’s clear, sincere, and consistent. She creates a complete portrait of a complex woman. She just knows how to let the turns of phrase Arthur Laurents wrote for her do the job. Even when Rose flirts so cunningly with Herbie, it’s the practiced skill in talking to men and her truthful way of expressing herself that seals the relationship, not tricks or wiles.

Then there’s Fraelich’s singing — expressive, purposeful, textured, and perfect in diction and pitch. Her vocals pack the power of her entire performance. Her “Everything’s Coming Up Roses” had the right chill, and her “Rose’s Turn” was every bit the sensational star spot it was meant to be.

As Louise. Anna Giordano adds sweet counterpoint to the show with “Little Lamb”. Her showdown with Mama Rose has the feel of a genuine mother-daughter conflict.

Mama Rose spends 90 percent of her time on stage. She needs a respite, and Laurents, Sondheim, and Styne provide her one of the best in musical theater history — Tessie Tura, Miss Mazeppa, and Electra — those proud strip women from Wichita, demonstrating the specialties that hide their lack of talent in “You Gotta Get a Gimmick.”

Kelly Briggs is likeable as Herbie, but he lacks the dash, fire, and reality Fraelich gives Rose, and Giordano gives Louise.

Director Jesse Cline likes to bring some documentary verité to his productions by using slides from the period. His choices for GYPSY were about his best. The leering men is the burly-cue were a snide joke, but the view of vaudeville marquees on Broadway and other period shots brought context and texture. He also deserves congratulations for the smooth flow the show. The only cavil is to wonder why no door or entrance was built upstage right for stage traffic. In a realistic production, it seems awkward and illogical for characters to stomp across the width of the downstage apron to effect entrances and exits that needed to be more immediate. Read the full review >>>