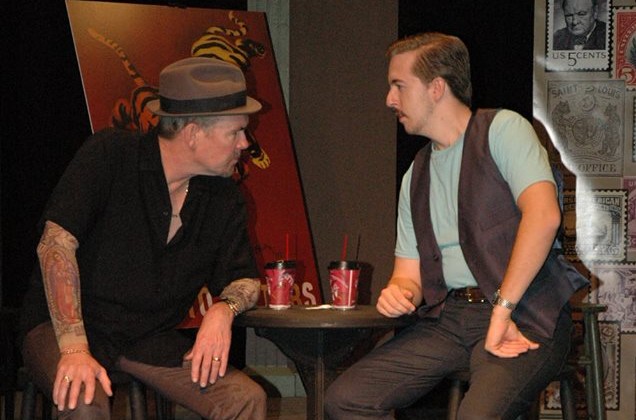 Directed by Marilyn Yoblick, Theresa Rebeck’s thriller with a philatelical twist leaves a stamp of suspense on an appreciative audience of assorted ages.

Two emotionally estranged half-sisters battle over their deceased mother’s collection of possibly valuable postal stamps; each feels entitled to this legacy for different reasons. Jackie (Leah Holleran), younger than her sibling Mary (Heather Ferrel) and more openly volatile, has been given the stamps directly by their mother, and could really use the money, while Mary insists it belonged to her paternal grandfather. A clandestine trip to a stamp shop for an appraisal ultimately involves Jackie in a deal with three collectors of disputable repute, as the stars of Mauritius, two postage stamps of astronomical value, shine like a beacon from the pages of the collection book, leading to potential danger.  Feeling disenfranchised by her family, Jackie is determined, “Two little slips of paper and I am born.”

Holleran gives Jackie a frenetic physicality. Described in the script as damaged, she is super-charged with attitude, which Holleran amplifies from the bobbing of her heels to the set of her jaw. Watching her spar on stage with her seemingly more relaxed sister Mary is like watching a duel between a coyote and a cobra.

Ferrel does a superb job at uncoiling Mary’s prim veneer over the course of the show, exposing her character’s inner venom with poise and confidence.  Dennis, a slick tongued, tenacious montebank enigmatically played by Bob McMahon, delivers one of the best lines in the play, “It’s the printing flaws that ratchet up the worth and make them “interesting” …just like the flaws in people.”  Jeff Ragan, donned in tattoos and leather, with a strut, adds an extra edginess to Sterling, the man with a delirious love of stamps and enough money to make Jackie’s dreams come true.

The owner of the stamp shop, Philip the philatelist, is portrayed with delightful detail throughout by Scott R. Grumling. (Do he and his coffee mug bear an odd resemblance?). There are also a fair amount of well done comedic moments in the production, keeping things even more lively as this terrific cast keeps the twists turning on stage, ratcheting the tension with each scene, until things truly go postal.

A bi-level set (Scott Killinger), set décor (Yaga Brady) and lighting (Browning Sterner), in conjunction with sound (Patrick Martin), are used to advantage, particularly in act two when Jackie is handling cash; a very fun theatrical moment!  Fight scenes (Terri McIntyre) can be very tough to get right, but this production’s choreographed fights manage to garner great focus, and even a couple of laughs.

MAURITIUS is a satisfying piece of caprice; Not a  “whodunnit”, but more of a “who’s gonna’ to do it, to who, and how…?”