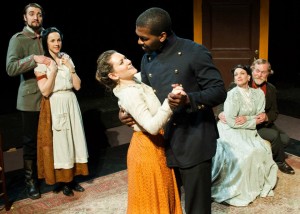 Two main threads run through George Bernard Shaw’s plays: social critique (he was an early member of the socialist Fabian society) and sharp observant humor. Some of Shaw’s social criticism transfers to modern audiences (PYGMALION’s class consciousness endures), others seem dated. Finding the relevant material and humor is the challenge of any Shaw production.

Some of the humor of the piece (the backwardness of eastern Europeans who think a library is a pretty neat thing; the precision of the Swiss), is lost on modern American audiences. The key social comments on servant/master relations lack relevance. The breezy way in which Shaw attacks military success and heroism noticeably pre-date the killing fields of World War I and later conflicts, when antiwar messages could draw on much deeper material. What remains is Shaw’s sharp view of human relations, the falseness of idealism and romanticism, and the hypocritical facades we present to society.

“‘When you strike that noble attitude and speak in that thrilling voice, I admire you,” says Bluntschi to Raina. “But I find it impossible to believe a single word you say.”

Director Alexander Burns plays up the farce in ARMS AND THE MAN, and this interpretation has its rewards. Field’s over-dramatic posturing as Raina garners many of the production’s laughs. The relationship between Adamson as Raina’s cartoonish father and E. Ashley Izard as her striving mother is also rewarding. Davis is intentional in his restrained, almost Spock-like, Bluntshli. But Burns is not always successful in meshing these individual performances; the relationship between Louka and Sergius is hurried, for example.

“Life’s a farce,” says Sergius to Raina, and it is true. Some of Shaw’s subtler and still-relevant witticisms are lost in the farce, but ARMS AND THE MAN has enough wit and insight to make for an enjoyable production of an enduring classic. April 17-May 25, 2013, quintessencetheatre.org.