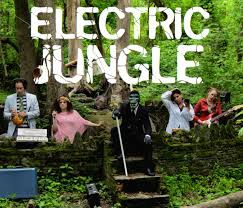 Found Theater Company’s latest foray into the Fringe Festival is everything the Fringe should be: experimental, inventive, boundary-breaking, and thoroughly engaging. Devised by Found’s young ensemble of multi-talented Temple University students and recent alumni, ELECTRIC JUNGLE explores the evolution of sound through a refreshing mix of original music, text, movement, and mythic imagery.

The self-described “visceral sonic happening” offers a smart and imaginative recreation of the impact sound has had, and continues to have, across time and on civilization. From the prehistoric proto-lingual grunts of the caveman, to the rhythmic joys of found percussion, to the primal bleats and quacks of fauna and fowl, to the post-modern expressiveness of folk, rock, and rap music, our sense of hearing and our need to communicate orally remain central to our development and to the theme of Found’s meaningful performance.

Like most creation myths, ELECTRIC JUNGLE takes a moral stance, with lyrics that call for a peaceful co-existence between humans and animals (“When you eat that steak, I hope you can still hear it moo”), and that shock with the hurtful sounds of hatred and bigotry (“Go home, you’re not welcome here”). The melodious voices of the skillful cast of five—Kerry Brind’Amour , Allison Mae Hoban, Matt Lorenz, Lee Minora, and Jordan B. Mottram–evoke the universal harmony of the spheres that cause plants to flourish, while mellifluous group chants by the ensemble elicit a deep-seated emotional response in our innate quest for community.

Performed inside the Painted Bride Arts Center–one of Philadelphia’s premier venues for alternative programming–the show’s intimate set design (by Jordan B. Mottram) and seamless multi-leveled staging (with direction by Phoebe Schaub and movement by Laura Michelle Edoff) make full use of the space. Expressive lighting (by Ryan Walsh), clever props, colorful costumes, and a meticulously clear sound design (by Sean Lally and ensemble) contribute further to the visual and aural delights of ELECTRIC JUNGLE.

This is a show, and a company, that will give you confidence in the future of theater in Philadelphia.