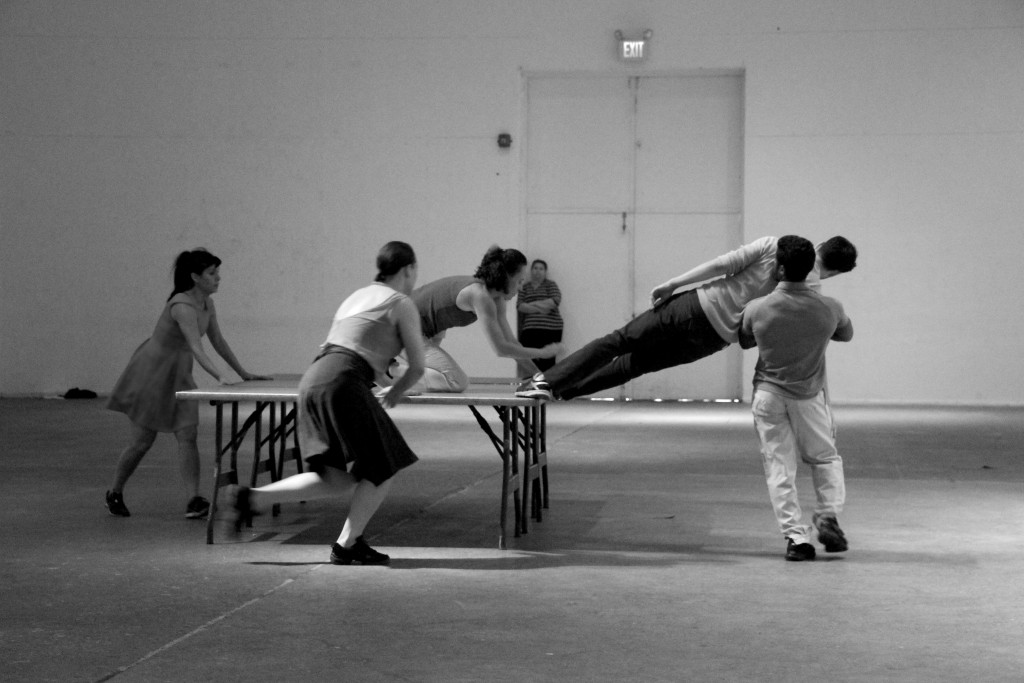 Supper, People on the Move reveals the traces of migration on the body. For the show, choreographer, Silvana Cardell and her dancers have been exploring the layered and physical experiences of immigration. Cardell inspirations include works of 15th century and post-modernist art. “The Last Supper has a strong emotional component: all the subjects—even though they are celebrating a ritualistic dinner, Passover—are placed in twisted and bent ways which expresses an awareness about the turn that their lives are about to take,” says Cardwell. She is also drawn to more recent artworks and stated, “Then the rest of the title: People on the Movewas inspired in Porter Series by artist William Kentridge; one of the sections that I call “balance” is inspired by these paintings that have human silhouettes carved into a map, silhouettes of people travelling—they are on the move, carrying everything they have on their bodies.” Silhouettes are black. They allude to unclear, shifting, or hollow identities. Cardell refers to her identity and the notion of “in between.” She explains, “In between places, cultures, languages. Constantly translating thoughts in both languages, dreaming in English, speaking Spanish, thinking in Spanish and speaking English. In between is the overlap, where many people live.” In 2002, Cardell moved to Philadelphia to gain her masters in choreography at Temple University and to avoid political turmoil in Argentina. While she originally planned on returning home after school, she remained in the US. The transition between homes was marked by two cultures, conflicting sensations, and physical suffering. Cardell sums up her duel experiences, “Even though we arrived to the US with a university fellowship and work offers, we had financially lost many resources, and relocating the family was hard. Even though I am grateful for all my new friends, my kids’ great education, and the many professional opportunities Pablo and I have had, we paid a big price for them, financially and emotionally. Once more I feel in between being grateful for the cultural immersion and regret for all our losses.” Cardell has since embraced her identity grounded in transition. “Supper is a return to myself, to the beginning, to my core. Supper starts with my own my departure; I am now ready, after many moves, to live with my decisions. I am examining the impulse to move away—changing culture, language, territory—as a search.” Instead of longing for a community she has left behind or feeling frustration for the one she has entered, she celebrates the space where seemingly distant cultures touch. She says, “In transit, in between, that is how I felt for years. I have to admit that perhaps that was an interesting practice for me, it taught me to be in the moment. I find that the best response in dance and performance is when you are alert, in the moment, ready to go. For me it has been living in the overlap of culture and places. After a while you became a dual citizen, you are able to navigate comfortably both cultures, there is certain richness about that experience.” Cardell copes with the transition between places by locating home. Her dance performances have shown us that home is within the physical body. “Immigration and moving is a constant search and recreation of home: Home is an endless space where place, family, relationships, and endless memories collide. Right now, my home and country are my body, where many experiences collide.”

Immigration is a physical transition as much as a mental one. Cardell described the dancing in Supper, People on the Move and said, “The goal is to expose noisy departures, bumpy beginnings, bodies exhausted by gravity pulls, contorted balances and extended suspensions in the nether world of being other.” Cardell’s movement concentrates on physical reactions of the body as they switch environments and the objects, like legal papers, that clutter the immigration process. Her dancers recreate the strenuous physicality of moving and each performer houses a different immigration story within their body.

Bethany Formica, a dancer in Supper, People on the Move, believes that the dance is “Less about beautiful dance moves, more pedestrian and stripped down. But when the movement is stripped down it is quite vulnerable. There is no where to hide. You must know exactly what you are striving for. There is an urgency in the movement.” Another dancer, Lean Grieger discusses rehearsal, “At this point we are so in tune with one another, and can almost tell what each other is thinking just by one’s breath rhythm. I know that it sounds crazy! The amount of trust that we have for each other goes beyond any other project that I have been involved in. It’s about being able to jump off of the top of that vertical table, 7 feet of the ground, with your eyes shut, and knowing that you will be caught.”

Come see this Supper, People on the Move, a bodily collision of loss, celebration, vulnerability, and mobility at Icebox Project Space at Crane Arts from June 25-28 at 8pm.

Supper, People on the Move has been supported by the Pew Center for Arts & Heritage.

In addition to the performances, which conclude with a family-style dinner, there is an exhibition, Portraits of People on the Move, curated by Jennifer Baker, at the entrance to the performance, which tells the stories of a variety of immigrant journeys to the US. The performance is also being screened outdoors at Independence National Park on June 26 at 8pm. To learn more go to supperdance.com.