In this first part of Phindie‘s interview with Alexander Burns, the director discussed his influences and how he came to direct the much-discussed production of MACBETH for Arden Theatre Company. In this, the second part, Burns praises Shakespeare’s poetry and talks about how he brings this beautiful writing to life.

Henrik Eger: Would it be fair to say that many directors and actors in the United States don’t respect a writer’s language as much as they ought to, or lack the necessary skills?

Alexander Burns: The contemporary theater rarely dares to have an actor stand on stage and throw a word at the audience with its true force and intent—many contemporary actors lack the muscle necessary to do it—as language is now subjugated by [the] psychological state of a character or by subtext. This return to the primacy of language and rhetoric is considered “artificial” or an antiquated approach to some. For me, it is the essence of Shakespeare, and why I do it.

Eger: In an Arden interview you said that “Shakespeare should be a daily part of people’s lives.” You have made a name for yourself in practically all your productions that show your great respect for a playwright’s language.

Burns: Yes, I place the language at the center of my production. I honor every word and establish its function in the metrical structure. I challenge my actors to be able to say every word with complete truth and power. If the emotional state of a character or their physical action or gesture obfuscates the language, or pulls the actor off a word, then for me, it is the wrong emotion or gesture.

The audience becomes aware that the characters exist through and because of the language they use. This makes the audience listen to language differently, and they are startled by the clarity of not just the words, but of Shakespeare’s thoughts.

Eger: You went so far as to put us on a linguistic and dramatic danger alert when you said, “I like to keep igniting and exploding Shakespeare in people’s faces.”

Burns: Words have power, and it is through Shakespeare that we can experience how many English words were formed to convey both reason and emotion. The word “fear” is repeated many times in MACBETH. You can flatten the word and say it in a way that conveys only its rational meaning. But the “f” is an unvoiced plosive [“a consonant in which the vocal tract is blocked so that all airflow ceases”], releasing breath through the teeth closed on the bottom lip, creating friction. This is followed by the diphthong “ea” and then closed with the harsh consonant “r”—almost like a growl. And suddenly, if you’ve utilized all four sounds, three difference forces in tandem, you create not only the meaning of the word, but also the sensation of fear. Hence the physical force of language and therefore the assault.

Eger: Theatergoers in France, Germany, Spain, and other non-English speaking countries access Shakespeare plays thanks to classical translations that have become popular over the course of time or because of brand new translations. Theatergoers in the English speaking world, however, don’t have that luxury. Instead, they have to grapple and come to terms with the original Shakespeare. What have you done to make it easier for modern audiences to get access to Shakespeare’s extraordinary, even magic, use of Elizabethan English?

Burns: I pity the foreign audiences who sit through contemporary adaptations by lesser poets than Shakespeare, more than the American ones who have to deal with a small spattering of words which are no longer part of our lexicon. The magic of Shakespeare is not in his plots; his sources are pre-existing stories and sometimes even popular plays from his day which he has adapted. Shakespeare’s genius is his poetry, and his ability to create character and dramatic action through dialogue. This means all you need to do good Shakespeare is an actor capable of speaking his words. The sets, lights, costumes are all embellishments and usually prove to be a distraction.

Shakespeare can create a horrifying, cold and dark castle battlement better with his poetry than any multimillion dollar budget, or even a film can do. My greatest challenge as a director on Shakespeare is to find the right actors and to establish a world which empowers Shakespeare’s words, allowing the audience to listen best.

Eger: Given that you asked playwright and actor Chris Patrick Mullen to “hijack the play” and rewrite the Porter’s speech makes your “pity the foreign audience” comment a bit of a mouthful—even though it reads well and, no doubt, can lead to great discussions.  Could you explain why you made an exception and encouraged the brilliant Mullen to present a modern translation of the drunk Porter at the gates of Hell? 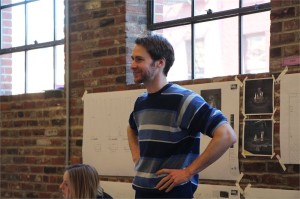 Burns: I feel differently with Shakespeare’s prosing clowns than I do with his verse. Shakespeare understood the power of the comic actor and had a number of the greatest clowns of his age to collaborate with. He also knew how to tell a joke, many of which bordered on satire. Satire rarely ages well, especially when the events or individuals satirized leave the public consciousness. Therefore, I felt comfortable, especially with a clown as wonderful as Chris Patrick-Mullen, to allow Chris to hijack the porter scene. It is a necessary moment of comic relief. I believe Chris pays homage to the character, language, and magic of Shakespeare with his interpretation. And most importantly, you will remember the porter.

Eger: In addition to language, Shakespeare tends to take us on a roller coaster through fate and the supernatural: a wood that actually moves; and a morass of love, ambition, and murder. What were your greatest challenges in this production?

Burns: Shakespeare’s MACBETH is known for its spectacle. There are the weird sisters and their cauldron, complete with supernatural apparitions. There are ghosts that rise from the dead. A child, a father, and a king are all murdered onstage before us. There is lots of blood from battles and murders on and offstage.

Something that became very clear to me when preparing the script for MACBETH is that Shakespeare is interested in three opposing forces . . . mankind (free will, ambition), the super natural (fate and the witches), and nature (the weather and the natural order of life and death). In MACBETH all three forces are at odds with the other, and the play is constantly upending the presupposed notions of which is superior and in control of the events unfolding before us. As rational, enlightened human beings, I think questions of order and control will always haunt us, and as a dramatist, Shakespeare mines these questions with great genius.

Eger: What were your main goals for this production?

Burns: I had three main goals when starting out this production. One, to embrace the gothic by creating a world in which witches were not quotidian [ordinary, everyday] , but like the Greek Furies, actually bubbled up from hell. Two, to embrace the athleticism and violence inherent to a culture in which the most powerful men established primacy and right through swords and combat. Three, to embrace the Grand Guignol, a theatrical tradition of bloodletting onstage. Thanks to the incredible ensemble of actors and a world class creative team, I think I achieved those three goals.

Eger: To this day, there are secrets in life that even our best scientists have not been able to discover, for example, the sanctified stone sculptures in Europe, especially in England and Scotland. We don’t know how Stonehenge and the “pyramids” of the North were erected and what their mythical origins were, except for the ancient burial grounds nearby. Tell us more about your centering this production of MACBETH on these sacred and phallic, but also potentially dangerous symbols of human desire that simultaneously demonstrate our hopes and vulnerabilities—as the monuments we erect could also collapse and destroy us.

Burns: When Brian Sidney Bembridge (the set designer), Solomon Weisbard (lighting designer), and I first started to talk about MACBETH, we knew we wanted to establish an epic and abstract space, and wanted to keep the architecture of the F. Otto Haas Stage as open and exposed as possible. We also knew that we wanted to create a sacred space, so that the audience would feel like they were stumbling upon an altar or place for ritualistic sacrifice.

Going off the idea of the play as an exploration of man’s will vs. the supernatural  vs. nature, the ancient sacred stone circles, of which there are many in Scotland, seemed like a natural setting for our drama. We abstracted the idea, so that that these stones, or “shards” as we came to lovingly call them, could be the sacred stones around an altar, or the edge of a crag on a battlefield, or the walls of the cathedral, or a palace.

The shards surround a circular stone disk or altar on which the events of our play—the occult, the rituals of battle, coronation, and much bloodletting—will occur. The shards give a sense of majesty, but also entrap the humans. The shards hang over the stage as vaulted ceilings, installed by human hubris to reach at heaven and keep nature out, while they perilously lean, threatening to collapse onto the inhabitants below.

Eger: Thank you, Alex. Your first production at the Arden brought in a wide range of articles from Talkin’ Broadway and the Washington Post to practically every publication in the Philadelphia area, reviewing your most riveting production of the Scottish play.