Setting the tone for the Temple University faculty concert on Friday January 30th, 2015, was Merian Soto’s The Practice of Peace: Group Branch Dance Practices from SoMoS.

One by one, the dancers penetrated the space with branches in hand.

Acting as an extension of each dancer’s limb, the branches became compasses as a strategic guide.

This colony of nomads ravaged the space carefully and with tenderness

Their branches slowly began to intertwine as relationships were formed and avoided.

This interplay became more resonant as the dancers balanced the branches on their fingers, their heads, and their shoulders.

Directed by Soto, The Branch Dance Series are works centered on consciousness in action. Her movement is grounded in a meditative practice that is energetic in its preoccupation with sustained time. A winning formula for Soto since 2005, the serene quality of her Branch Dance Series continues to intrigue audiences when performed.

Sometimes, the coming together of good dancers, an interesting soundscape and space altering set, doesn’t deliver the impact you expect. Faculty member Laura Katz Rizzo’s Icarus vs. Ancaru was mildly effective. Danced by Katz Rizzo and Nora Gibson, the piece encompassed fighting gestures, classical ballet vocabulary and stroppy partnering. Although Katz Rizzo and Gibson were technically efficient, and had good intentions, Icarus vs. Ancaru didn’t quite converge. The program notes explained that the piece was supposed to be a hybrid performance that should have included camp, humor, technical virtuosity, sport, and the performing arts in order to queer the dancing body. But ballerinas Katz Rizzo and Gibson only teased the audience with slightly homo-erotic interactions throughout the piece. From bourees to penches, both dancers demonstrated their grasp of the ballet lexis. Their abilities combined with the boxing ring set, were extremely successful in achieving a part of Katz Rizzo’s goal. I’m not sure the humor was conveyed or that the camp was campy enough but I would love to see how this piece blossoms into Rizzo’s full vision.

Faculty member Jillian Harris was the assistant choreographer, co-producer, and performer alongside Yebel Gallego in the dance film Red Earth Calling. This showing was a special sneak preview but no mention was made of its impending release. 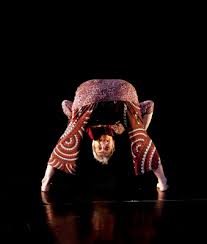 Excerpts from guest artist Andrea Miller’s Wonderland showcased a cast of fifteen dancers scurrying through the space with youthful exuberance and over exaggerated facial expressions. The piece had the aesthetic sensibility of a cheerleading squad mixed with the visual impact of dancers dressed in pantyhose. The sheer physicality of the piece excited the audience but a work with this much animation, gestures and group work, would be more effective if the entire cast was committed.

Faculty member Kariamu Welsh and Kun-Yang Lin offered works in progress. In Hagar’s Sisters, Welsh constructed a duet for Shaness Kemp and Dara Stevens-Meredith. Danced to music composed by Nathaniel Dett and performed by Clipper Erickson, Hagar’s Sisters explored the theme of exclusion. Welsh, creator of the Umfundalai technique, produced movements that effortlessly lived in the bodies of Kemp and Meredith-Steven. Their physiques enveloped Welsh’s aesthetic and both delivered commanding performances. They found places in choreography to showcase their strengths; Kemp sustained each moment a little longer as if to say “yes, this feels good,” while Meredith-Steven, the more unapologetic of the two – sometimes seemed a little hurried. A master storyteller, Welsh managed to successfully display her technique alongside the sound of a piano, creating a seamless harmony of movement, music, and narrative. Lin, in his newest work Home/S.9th St tackled the theme of migration. Designed to investigate the issues of immigration, social justice and healing through community, Home gives voice to an under-represented population that sometimes live in the shadows. Lin’s bravery was physicalized by Helen Hale, Rachel Hart, Jessica Warchal-King and Wei Wei Ma, but it was Evalina Carbonell and Liu Mo who stole the show. Carbonell slithered through the piece allowing her body to tell the story with each movement phrase. In her calm controlled demeanor, Carbonell performed like a well-lubricated machine. Mo, quiet at first, erupted from his noiselessness to charm you with his temperate movement quality and chary stance. Knowing that this is a work in progress, I only hope that Lin is considering a duet for Carbonell and Mo.

Temple continues to be mecca for dance education both locally and nationally. I was pleased to see some of what would be passed on to the next generation of dancers. [Conwell Hall 1801 North Broad Street] January 30, 2015; temple.edu/boyer.