Republished with kind permission from the Dance Journal. 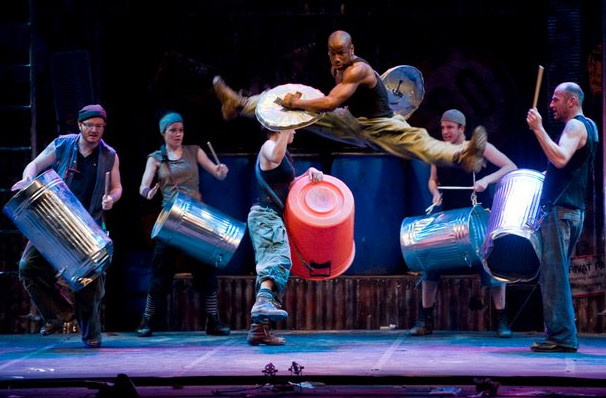 With performances in over 50 countries and audiences exceeding 24 million, it was no surprise that STOMP packed Philadelphia’s Merriam Theater and brought the crowd to its feet. Directed by Luke Cresswell and Steve McNicholas, the off-Broadway sensation began as a street performance in the UK. Since then STOMP but has gone on to grace theaters around the world, earning an Olivier Award for Best Choreography and an Emmy for its HBO special STOMP Out Loud.

So what makes its garbage can percussion so exciting? Why has STOMP, with its pedestrian costumes and trash yard set, stood the test of time? Why are audiences still trying (and failing rather miserably) to clap along after all these years?

It comes down to the beat: so precise, but still so energetic and seemingly effortless. The eight percussionists that make up the cast can—and do— get sound out of just about anything: a kitchen sink, a plastic bag, a box of matches, an abandoned cup of soda, a dryer hose, a wooden pole, even a lighter.

The concert, which runs approximately 90 minutes, opens with a lone figure sweeping the stage but forget about Gene Kelly and his mop: this broom is not a partner but rather an instrument, and before you know it there’s an entire chorus of them. The sweeping motion provides a constant pulse, which is accented by striking the edge of the broom on the stage. The rhythm builds, first only a few extra accents, then an intricate polyrhythm with each artist contributing just a beat or two but in perfect time.

This theme, of layering rhythms over top of one another, is a motif that repeats throughout the show. Sometimes its brooms, sometimes its inner tubes, sometimes its paint cans, but the dancers’ agility and knack for synchronization keeps it from feeling repetitive. In one particularly impressive piece, they begin by tapping out a militaristic beat on a collection of metal buckets; then they swap out the buckets for small paint cans, tossing them through the air across the stage without missing a beat. You keep your eyes peeled for a crash, for just one miss, but it never happens, even when one artist is left to catch all of the paint cans at the end. He tucks them between his knees and under his elbows and the crowd goes wild.

Despite its well-rehearsed intricacies, the show maintains an overall feeling of spontaneity, as if eight talented dancer/drummers just happened to meet up on a street corner and just happened to find eight tubes tuned to the perfect pitch, but the effect is so magical that we go along with it. STOMP has plenty of physical comedy too, some of which is pure slapstick but some of which is more subtle and caught only by the grownups in attendance. [Meeiam Theater, 250 South Broad Street] December 26-30, 2014; stomponline.com,