The curtain speech at the Society Hill Playhouse’s TIL DIVORCE DO US PART leads the audience to believe we are about to witness a musical filled with laughter and heart about one of the most heart-wrenching subjects in America. Unfortunately, this 90-minute cabaret featuring of three bitter divorced women and an annoying newspaper pen pal crams heartless bubble gum jingles and cheap laughs into the plot of a confused Lifetime special.

We are introduced to Dottie (Trevor Cahill), a writer of a newspaper column for divorced women who has been answering letters since the paper debuted. However, this Dottie is actually a young man who has taken over for his family member, the original. The letters introduce each musical number with different scenarios; all of which contain three women singing about their recent divorce, typically losing their man for another woman.

With no set, and hardly any costumes, the actors should be able to propel this piece forward, but most of them fall flat. Trevor Cahill disappoints with a wooden and tone-deaf performance as Dottie, the role with the most potential. Of the three women, Cassandra Nary and Michelle Pauls give bubbly portrayals that border on headache-inducing. Donna Dougherty is perhaps the saving grace of the show—a much needed burst of energy and heart, with performances that make everyone in the house smile from ear to ear. 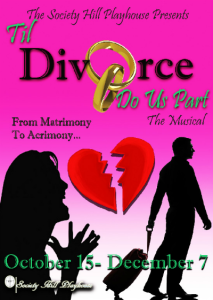 Dann Dunn’s direction and choreography is vague—it seems as though the actors do anything they want on stage. Staging and audience interaction are messy to watch and I am sure cleanup is awful at the end of the show as drinks are spilling due to clumsy actors knocking into audience members’ tables.

The score (John Thomas Fischer) and lyrics (Ruthe Ponturo) are repetitive,cartoonish, and passionless. This one-act songbook could easily be condensed into a three-minute medley and send exactly the same message. Still, pianist Thomas Fosnocht does a brilliant job of being a part of the action; he is one of the more entertaining personalities of the evening.

I was watching the show quoting one of the show’s song titles: “If only you were gay”, hoping it would shift gears and make me happy with comedy and a toe-tapping score. Unfortunately, TIL DIVORCE DO US PART turns out to be less fun then running into your ex on an elevator. [Society Hill Playhouse, 507 South 8 St.] October 15-December 7, 2014; societyhillplayhouse.org