Excerpted from a full-length review on Neals Paper. Reprinted by kind permission.

Intense mystery and low comedy have been combining in Patrick Barlow’s stage version of THE 39 STEPS since Maria Aitken staged John Buchan’s cleverly plotted spy thriller in London in 2005. Alfred Hitchcock may have started the comic infusion with his 1935 movie of Buchan’s novel that was issued the same year, four years before World War II. 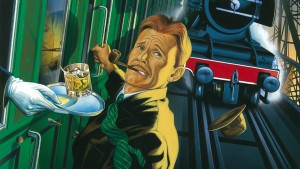 Stage renditions of THE 39 STEPS now have something akin with Zero Mostel performances. Aitken’s production started out measured, letting lighting be as much of the story as Barlow’s dialogue, and taking her comic cues from the music hall sequence near the top of the show. Recent stagings get broader and broader until the crux of THE 39 STEPS—the mystery—gets crowded out by comic business that borders on slapstick. The two parts of Barlow’s entertainment don’t blend as felicitously as when Hitchcock or Aitken was as the helm.

No matter. Audiences deservedly love the shtick, and the play has become a popular entertainment that seems destined to haunt every regional theater in the English-speaking world. Audiences, Patrick Barlow’s banker loves you!

Of the dozen productions I’ve seen, Gus Kaikkonen’s for Bristol Riverside Theatre is the most unusual. It is uniformly well-acted by a gifted quartet that can create high drama while acing the farcical elements. Karen Peakes and Dan Hodge give two of the better performances I’ve seen in their roles. The pace moves briskly enough to remain entertaining as comedy and involving as mystery. You care whether the lead character, Richard Hannay (Matt Leisy), succeeds in a dangerous and often thwarted mission. Costumer Linda B. Stockton and set designer Charlie Morgan are versatile in creating clothes and environments that enhance the jokes and the intrigue. The basics in Kaikkonen’s production are solid and in place to get THE 39 STEPS rolling smoothly.

Following a brief, unnecessary, and fairly pointless opening that seems meant to clue you that all you are about to see is presented by an improvisational vaudeville troupe, Kaikonnen settles into a fairly straight telling of THE 39 STEPS.

His restraint is the encouraging part. A lack of ready wit is the insuperable problem. More and more, comedy and intrigue are blending, and more and more, the comedy seems self-conscious and haphazard while the intrigue always snaps one back to attention. It’s as if Kaikkonen was aware that THE 39 STEPS is done these days as a farce and threw in a sight gag or two so as to go with the trend and not disappoint.

Kaikkonen doesn’t seem to have a sure hand, a comic’s gift, for timing or orchestration of a routine. Hodge tries to rescue his director by being a touch more fluid and nonchalant at farce than his castmates, but Kaikkonen’s ideas are not good or inspired enough to be worth his effort.

Of course, there are some legitimate laughs. When Hannay and a woman take stormy-night refuge at a remote Scottish inn, Hodge and Sowers have a field day playing the friendly and curious innkeepers. Some sight gags manage to take hold, like station markers whizzing by when Hannay is on the lam and heading for a lightly populated place in Scotland. The problem is while that simple maneuver seems clever, the movements on the train and the frenzy with which Hodge and Sowers play passengers, platform vendors, and policemen is underorchestrated so a lot of fast-paced motion takes place but it never translates to well-packaged comedy. This maniacal but unfocused pattern continues throughout the production. Occasionally a bit breaks through but this is rare.

Kaikonnen fares much better — much much better — in the scenes that relate to Hannay’s desperate mission. He limits the shtick in these passages and is adept at building tension, especially concerning whether Hannay will have enough time to keep future calamity from happening to Britain via the loss of its military secrets.