Reprinted by kind permission from The Dance Journal and Drexel Now. 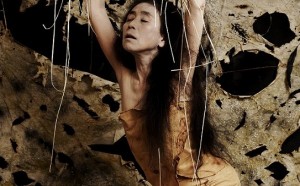 Guggenheim, MacArthur, McKnight Fellow and Doris Duke Performing Arts Award-winning choreographer and dancer Eiko Otake will visit Drexel University to present her signature movement style in a lecture on “Delicious Movement as a Way of Knowing” on Thursday, October 16, 2014, at 7 p.m.

Using video and imagery, Eiko will introduce and explain the philosophy of Delicious Movement as a quiet, slow-paced, creative practice available to everyone who is interested in learning more about themselves and the world around them through the introspective, quiet and conscious experience of their own body.

“Delicious Movement is designed for all people who love to move or who want to love to move with delicious feelings, or anyone who is interested in motivational and structural aspects of the creative experience,” said Eiko who teaches Delicious Movement in an extended workshop version in communities, colleges and art schools. She developed the series as a noncompetitive training suited for all level participants. The workshop is grounded and includes slow movement on the floor, which intends to calm the body and bring it to the peaceful and healing state. Eiko confirmed that the shorter workshop creates a sense of community among participants in just a few days and added “Semester-long course creates a new community. I hope (and actually think) that Delicious Movement Workshop creates a sustainable culture of peace and democracy.”

When I asked Eiko about the title “Why ‘Delicious’?” she responded: “‘Delicious’ is a bodily sensation, highly individual and cultural for some. You can offer food to a guest but can never know if he or she finds it ‘delicious.’ Like eating food, however, a certain taste can be tried, experienced, and learned to like.”
Her workshop invites participants to look outside of their learned boundaries and expand their taste for movement that may be very different from what they are familiar with. “I encourage them to find their own deliciousness in moving.”

A short version of the workshop in lecture form, will be presented by the Drexel Dance Program and will take place in the Mandell Theater (33rd & Chestnut streets) at 7 p.m. on October 16. The event is free and open to the public.

Eiko Otake, a Japanese-born and New York City-based performer, choreographer, and teacher, is one of the creators of Eiko & Koma, the unique and riveting theatre of glacial-pace yet expressive movement “out of stillness, shape, light and sound.” Together with her husband and artistic partner, Koma Otake, they have created interdisciplinary performances focused on human conditions, philosophy and politics and presented their work at theaters, universities, museums, galleries and festivals worldwide, including numerous appearances at the American Dance Festival, BAM’s Next Wave Festival, Whitney Museum of American Art, Walker Art Center and MoMA in New York City.

The artistic duo is also recognized for living installations and site-specific performances including Battery Park near Ground Zero, churches and temples, rivers, parks, and currently 30th Street Train Station in Philadelphia where Eiko presents a series of solo performances every Friday in October. For a full schedule, click here

Eiko & Koma were honored with two “Bessies” (The New York Dance and Performance Awards in 1984 and 1990), double Guggenheim fellowships (1984), and the first United States Artists Fellowship (2006). They were the first collaborative pair to share a MacArthur Fellowship (1996) and the first Asian choreographers to receive the Samuel H. Scripps American Dance Festival Award (2004) as well as the Dance Magazine Award (2006) for their life long contribution to American modern dance. Both Eiko and Koma received individual awards as the inaugural Doris Duke Performing Artist (2012), which now supports their solo activities.