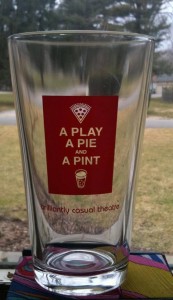 It’s a great idea, imported from Britain: a happy-hour-long play, served with a slice of pizza and a beer.  Now in its fourth season, a Play, a Pie and a Pint will begin on October 2 at The Red Room of The Society Hill Playhouse. Each week a different theater company will present three performances of a new show.

“We are thrilled to be presenting such a diverse line up of one acts produced by some of Philadelphia’s most exciting theatre companies,” says Emma Gibson, artistic director of Tiny Dynamite, and the force behind bringing this London-style pub theater to Philadelphia.

Pints are courtesy of Yards Brewing Company, Pizza is from Gian Franco’s, there’s live bagpipe music, and a bonus radio play by The Hear Again Radio Project, preceding performances for the opening show. It’s brilliantly casual theater, it’s only $15 a ticket, and you’ll be home before most theater shows even begin. Plus, beer. [The Red Room of The Society Hill Playhouse, ] October 2-26, 2014; tinydynamite.org (All shows 6:30-7:30pm; full details below).

October 2, 3, 5: The Letter of Last Resort by David Greig
Presented by Inis Nua Theatre Company
Directed by: Claire Moyer
London, England. The Prime Minister must write a letter. A letter that will be sealed in two safes in a secret submarine under the sea and only opened if London is destroyed. What on earth should she say?
(There will be a short radio play The Archers, episode # 17176 presented by HEAR AGAIN RADIO PROJECT preceding this production).

October 9, 10, 12: A Number by Caryl Churchill
Presented by Tiny Dynamite
Directed by: Rebecca Wright
What would you do if you discovered that you weren’t the first you? And that there might be a lot more of you out in the world? Bernard’s father has something rather unexpected to explain to him.

October 16, 17, 19: A Respectable Widow Takes to Vulgarity by Douglas Maxwell
Presented by Azuka Theatre Company
Directed by: Allison Heishman
When her husband dies, Annabelle forges an unexpected friendship with his potty-mouthed employee. Will the comradery and profanity help her move past her grief?

October 23, 24, 26: We Can All Agree To Pretend This Never Happened by Emma Goidel
Presented by Interact Theatre Company, play commissioned by Tiny Dynamite.
Directed by Kittson O’Neill
When two gungho researchers decide to fake results in their Siberian lab, a series of misunderstandings takes over the lives of the whole
research team. A hilarious play about scientists with a serious mission.