Published by the Dance Journal. Reprinted by kind permission.

PHILADANCO!, the city’s premiere modern dance company, had a bit of a problem during its final performance of Blood, Sweat and Dance at the Kimmel Center on Saturday night: the ushers had run out of programs and had to hand out black and white photocopies. In the dance world, however, this is a very good problem to have, and in this case, it was a testament to the company’s continued preservation of predominantly African-American traditions in dance. 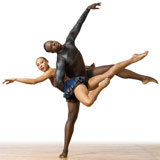 The program included works by Donald Byrd, Gene Hill Sagan, Ulysses Dove and Rennie Harris. Byrd’s contribution “BAMM” was originally set on Dayton Contemporary Dance Company but it was a great piece for the highly trained and highly physical dancers of PHILADANCO. Their purple and red unitards reminded me of the beloved Giant Heart exhibit at the Franklin Institute, especially when they paced around the stage, circling, then pivoting, then sliding sideways in deep second position pliés. I would have liked to have seen the full work instead of just the except the company danced this past weekend; the seemingly unrelated story lines which positioned five dancers at one side of the stage and two at the other didn’t quite make sense but the work’s crescendo was well worth it. The full cast of dancers stormed towards the audience, pivoting just inches before the edge of the stage, repeating the earlier motif of lunges and chasses as the lights began to dim.

Sagan’s Suite en Bleu seemed a bit sloppy at points but overall, the neoclassical ballet was just as pretty and dreamlike as it was when the company performed it back in 2012. Set to the music of Handel and Bach, the suite was the most balletic of the evening, but it was ballet infused with forced arches and effervescent yet seemingly effortless leaps. It was the sort of dance we would all do to celebrate (in this case) the long awaited arrival of spring if only we had the stamina and flexibility of the ‘DANCO dancers.

Dove’s Bad Blood, a company premiere, provided a start contrast and instead of beauty, there was brutality. The work began a cappella with a single male dancer. He pirouetted to the floor then jumped up onto his feet, knees bent in a deep hinge. He bore his fists, defensive and boxer-like, drawing the audience into a world of inner turmoil. The dancers let their hair down and wore simple white unitards. Traditional rules of partnering were thrown out the window, as were laws of gravity, as dancers leapt over one another, sometimes jumping of their own accord and sometimes being thrown.

Concluding the robust program was “Philadelphia Experiment”, choreographed by the city’s own Rennie Harris. In contrast to Wake Up, which the company performed in 2012, this iteration of hip hop was lyrical. Images of North Philly flashed across the stage then they got closer—uncomfortably close, even, in their depiction of a homeless man seated outside of a storefront just around the corner from the Kimmel. Dressed in rust-colored hues, the dancers crawled across the stage before beginning to stand up. Gaining a collective strength, they rose from the floor one by one to balance in an arabesque. Shoulders and backs began to pulse as sneakers padded softly on the stage. The work seemed to end with a single slide reading, “We the people of the United States are sick and tired of getting the run around” but a burst of energy set the company in high gear: now this was “fun” hip hop and the audience responded in kind with a standing ovation as the dancers leapt across the stage proving, once again, that PHILADANCO can do just about anything.