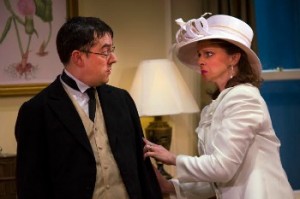 HOTEL SUITE highlights the best of Neil Simon’s successful play-turned-movie series including PLAZA, CALIFORNIA, and LONDON SUITES. HOTEL SUITE is a fun, in-your-face, comical view of real life for two very different couples during their stays in a hotel. It’s 1975 in California; in the first act we meet Sidney (Leonard Haas) and Diane Nichols (Karen Peakes), a London couple in town for an Oscar nomination. Next we meet Marvin (Tony Braithwaite) and Millie Hubley (Tracie Higgins), your average American couple in town for a Bar Mitzvah. Although these couples seem quite different, we learn how strikingly similar they actually are in the quest to hold on to love and companionship as they both reveal their own troughs of sacrifice and secrets.

Fast-forward to 1984 and we revisit Sidney and Diane in London and discover how the world has changed their relationship. In New York, we watch the Hubley’s learn about themselves as their daughter Mimsey (Janet McWilliams) contemplates a journey into the fearful world of married life.

HOTEL SUITE runs the gamut from hilarious and heartwarming to provocative and funny. Director Matt Silva clearly encouraged the talented cast to convey the heaviness and humor that is real life. The actors make the audience feel invested in the couples’ futures awaiting how the years will change and mold them.

What cannot go unmentioned are the beautiful sets cleverly arranged and rearranged, enabling the actors to use the stage and props to tell the whole story down to the most minute detail. [Act II Playhouse, 56 E Butler Ave, Ambler, PA] February 18–March 23, 2014, http://act2.org/.