The defining moment of my travels to and from Kensington’s remote theater district thus far has been right outside of the Berks station on the Market-Frankford line. I had just left Walking Fish Theater’s American Fairy Tales. I hustled down the five blocks which separated stage and station, down dark and deserted streets, past empty lots and triple-locked houses. At the foot of the stairs to the station, I heard the train approaching, and dashed up a few stairs. 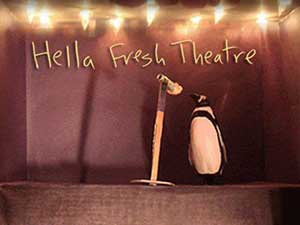 A man I hadn’t noticed, a few steps above me, spun around. His eyes were wide and his body squared, and I realized: “He thinks I’m going to jump him.” I stopped, nodded, and then brushed past while he ranted that, in this particular Kensington neighborhood, it isn’t a good idea to run at anybody.

I have rarely felt so much like a tourist in my own city.

The empty streets; the long, vacant lots; the securely locked houses and suspicious glances don’t scream “theater district,” not in the classic sense.

The performance spaces which have made Kensington their home (Walking Fish Theatre, Hella Fresh, Mascher Space, and fidgetspace) are remote, both financially and physically, from the city, yet still close enough to converse artistically with downtown venues and even to attract funding. But slouched in Walking Fish’s comfy seats watching bandits burst out of a crate to terrorize a drag queen, or crammed into a hallway in Mascher holding a bag of melting peas, I feel like an insider. I feel like I know something no one else does.

So, theater companies: why Kensington?

John Rosenberg was basically given the building at 2825 Ormes Street by his real estate agent father-in-law. In 2010, the two of them put their backs and their funds into what is now the Papermill, home to Hella Fresh Theater, where Rosenberg’s gritty invention has free reign.

Rosenberg has produced seven plays since he opened his doors two years ago, addressing subject matter like drug-addled Berkeley students, Lance Armstrong, and revolution in Saigon. His style is brutal hilarity, his characters have sunk themselves into hideous situations — watch them try to get out. Isn’t that the making of great theater?

“I think it can be a challenge getting an audience sometimes,” says Rosenberg, addressing the topic of his theater’s location. “One critic,” he tells me, “was stopped [after a show] by the police because they thought she was a prostitute.”

“But how often do you get a chance to own a theater?” he asks me. Probably not often, I reply. Renting a place like Plays and Players for a short run can amount to over a thousand dollars, money John’s one-man operation couldn’t comfortably afford. And anyway, at the Papermill, he runs the show. He can chain-smoke cigarettes.

When Rosenberg et al were building the Papermill, Mascher Space, a dancers’ co-operative five blocks away at 155 Cecil B Moore, had been hosting new dance works for five years.

Member Annie Wilson says she isn’t sure how Mascher ended up in Kensington (all of the founding members have since moved on, some for lively careers in LA and NYC, others to West Philly).

She is sure that the low cost of the space creates freedom for members. “The thing that’s really amazing is that you’re paying $100 to $150 a month, whether or not you’re using the space,” she says. Unlike a rehearsal space you rent hourly, which you can only afford for the weeks leading up to a performance, Mascher is there for members every day. “That has been really critical to my growth as an artist.” For members, Mascher’s spacious, warm premises have become a home and an inspiration; Christina Gesualdi’s production of our nebulous motor was inspired by, and then performed in, the narrow hallway between the studio and the roof access.

Right next door to Mascher is fidgetspace, a performance venue privately curated by Megan Bridge and Peter Price. They have hosted over 183 events since it opened in 2009, focusing mainly on local artists but ranging in theme from dance parties by King Britt to ThingNY’s This Takes Place Close By, an experimental opera about natural disasters, complete with umbrellas. They also give lectures, hold discourses and reading groups, and host their original work and well-known choreographers like Susan Rethorst.

Fidget was an accident, says Bridge. She and Price moved to Kensington out of Old City — again, for the price, and for the amount of space it provided — and once people found out that they had a dance floor and room for 45 seats, they couldn’t help renting it out.

Walking Fish co-founder Michelle Pauls tells a similar story, except that she and her husband Stan Heleva moved from Northern Liberties.

“I remember when we moved here [to Frankford Ave] there wasn’t even a coffee shop,” says Pauls. “People said we were crazy.” Since then, Frankford’s gallery scene has boomed and Walking Fish has become a neighborhood staple. Their broad range of programming, from children’s theater (often featuring amateur neighborhood performers) to titles like Blood Kegger on Monster Island and George F Walker’s Suburban Motel series, with Wednesdays pay-what-you-can night, have proven an accessible model, rarely failing to fill in their cozy proscenium space.

Across the board, when I’ve asked if these artists consider leaving Kensington, they’ve said no. Annie Wilson points out that just four years ago it wasn’t rare to see people nodding off in the streets, and even Girard was a sleepy avenue.

“It has changed so much, and that’s just in four years,” she says. “In five years, it won’t seem so remote.”