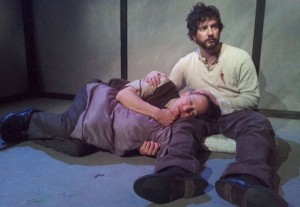 After seeing Luna Theater‘s mindcrushing production of Martin McDonagh’s THE PILLOWMAN last night, I found myself a broken man. I was shellshocked. Catatonic. I couldn’t look another human being in
the eye because I knew all I’d find there would be a darkness more stubbornly infinite than the universe itself. That was amazing, I thought. But I’m scared now and I want to go home.

Thank God I got home in time to catch Taylor Swift’s headbanging performance of “All Too Well” at the Grammy Awards, allowing the debris of human inhumanity left by McDonagh’s supremely fucked-up masterwork to be cleared from my mind by a young pop singer having an ordinary, innocent hairgasm in public. It was exactly what I needed. But I fear that the mental stain of THE PILLOWMAN, like an old sports injury or certain mid-career Journey singles, never really goes away.

For the production itself, I can say little that wasn’t already written in more eloquent words by Phindie’s own Jessica Foley last week. “This is not a play you simply watch,” wrote Foley, “it’s a play you survive.” She’s right, and the road to survival of THE PILLOWMAN is, as in the wild, marked by unflinching attacks to the mind and the heart and the stomach. It’s an ordeal, and in order to fully throw yourself into the story you must trust in the strong arms of cold reality to break your fall. So rather than write a proper review of Luna’s (excellent, hilarious, heartbreaking) production, what I’m offering is a companion piece for the unprepared viewer; a sort of guide for how to deal with your conflicting, colliding emotions as they rise and fall like drunken pistons throughout the (to quote Foley again) “delicious 140-minute anxiety attack” that awaits. Consider yourself warned: THE PILLOWMAN is not a play for the weak-spirited.

These are the Five Stages of THE PILLOWMAN:

1. Denial. Okay, you’re thinking at the beginning, it’s a comedy, right? I mean this premise is ridiculous, and the banter between the main guy (Robert DaPonte) and the detectives (Ian Lithgow and Chris Fluck) is hilarious! I think it’s a comedy.

Yes, hapless audience member. It is a comedy. Until it isn’t.

2. Anger. Okay, you’re thinking after a few minutes, what in the actual fuck is going on here? What’s with all these murders? What’s with the main guy’s brother (John Zak)? He’s an outstanding actor, and I admire the way he commits to a difficult character, but seriously—what the fuck is with this twisted play?

3. Bargaining. Okay, you’re thinking when the house lights come up, it’s over, right? The conflict established by the first scene seems to have reached a surprising and inevitable conclusion. Yes, I think it’s over. I can go home now. Right?

Wrong, hapless audience member. You’re not out of the woods yet. This is only the intermission.

4. Depression. Okay, you’re thinking when the play ends, so that’s the world I live in, huh? A sick, depraved dystopia of senseless violence and inappropriate wordplay, bent irrevocably toward totalitarianism and drained of any shred of empathy or compassion. Great. Where’s the nearest bridge I can jump off of?

Chill out, hapless audience member. You’ve only just left the theater. Let it sink in. You’ll be okay.

5. Acceptance. Okay, you’re thinking as you carefully tread the slushy sidewalks of 8th Street on your way home, I understand. The people around me are not monsters. I realize that there is an unthinkable darkness lurking beneath the polished surface of everyday life. But I see, too, that there is a dim light of hope there with it, and that screwheads like Martin McDonagh force us deep into the blackness so that we can learn to appreciate and cultivate the light. I can do my part by surrounding myself with only good things. I can go home and watch Taylor Swift sing at the Grammys. I wonder what her hair will look like. Yes, Taylor’s hair is the light; let us go to it.

Except when it is.