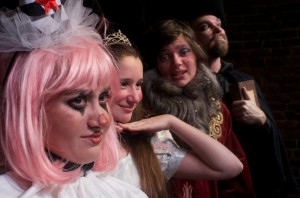 Walking Fish Theater looks cozy on an icy winter night, situated as it is between two row homes on Frankford Ave, under the funky neon lights of the front window. Coming from South Philly, Kensington always feels further away than it actually is, but fortunately I’m not such a stranger anymore. Thanks to Little Berlin, <fidget>, Pig Iron’s studio, and mascherspace, I’ve gotten off at the weird-sounding Berks and York-Dauphin stops plenty of times by now, and I’m no longer intimidated by the neighborhood’s deserted streets.

It’s cozy inside, too. AMERICAN FAIRY TALES is my first Walking Fish show, but co-artistic director Michelle Pauls, and stage manager Lisa Sullivan were crammed into the tiny lobby, telling me how happy they were to see me and begging me to have a tasty beverage or freshly popped popcorn, for which I could pay whatever I liked.

Their modest theater was packed, the kids were riotous, and the intermission breaks were filled with unison Christmas carols. This is fast and messy theater making, thriving on audience involvement. The story doesn’t matter as much as the laughs, and the more we shouted along, and the more sassy little Benjamin in the front row jeered and challenged the actors, the more engaged they, and we, became.

AMERICAN FAIRY TALES is a kids’ show, adapted by co-artistic director Stan Heleva from L. Frank Baum’s short stories with a generous amount of modernization and localization. The cast features experienced actors alongside local youths, like 7th grader Helen Sher and high schooler Michael Trainor, and everyone gets a chance at a star role.

The first story, BOX OF ROBBERS, is admittedly a bit of a mess, relying on some fairly un-funny drag and pseudoItalian accents, though Sarah Braun’s twitching mustache and Matt Shell’s confident improvisation rise above the chaos to pull consistent laughs. Once through that, the evening is golden. The audience is invited to cheer and boo along with THE QUEEN OF QUOK, the story of a penniless and riotous boy king who weasels his way out of an arranged marriage, and to make hilarious animal sounds with THE GIRL WHO OWNED A BEAR.

Budget doesn’t mean a whole lot in theater, not if you have a strong vision, dedicated artists, and inventive designers. Anna Frangiosa’s costumes shine, particularly a massive, fuzzy bear suit for Dave Ferrier, and a spidery black nose for Matt Shell’s leopard suit.

Especially if you live in the area, this $7 show has a warm community feel. Your kids might even have a chance to get on stage, and in that tiny theater, everyone gets a little bit of personal attention from the actors. December 20-31, 2013, walkingfishtheatre.com.