Bassist Adam Kubota is enjoying life on tour with Scott Bradlee’s Postmodern Jukebox. The band performs today’s pop hits in the style of yesterday’s classics. The musician took a few minutes to speak with Phindie about some of the best parts of the job. Kubota has played with an extensive list of artists on stages such as the Sydney Opera House and Red Rocks Amphitheater.

Debra Danese: How did you become involved with Postmodern Jukebox?

Adam Kubota: I met Scott when I was in grad school at the University of Hartford. We were both students in the music department at the Hartt School, a division of the University. We did a lot of gigs together during that time and remained friends from then until Scott started PMJ in NYC in the early 2010s.

DD: Which arrangements do you most enjoy playing with PMJ?

AK: I enjoy playing “All About That Bass” because there is a GUARANTEED bass solo in there for me every time. I also enjoy playing “Bad Blood” by Taylor Swift, with the amazing Aubrey Logan singing and playing trombone. It’s such a cool arrangement of a song that originally had some rap verses. Scott did a great arrangement, evoking some Duke Ellington tunes, and Aubrey is a virtuoso on the voice and the trombone. 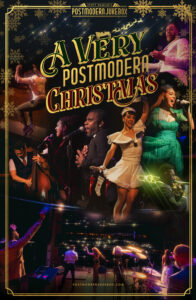 DD: Do you have any pre-performance rituals?

AK: I usually go for a run about every day! It’s a great way to see whatever city we are in and to get exercise as well. Also, we do something called “Circle” before every show where one cast member leads us with whatever words they want to share. I put my own twist on it by using a randomizer app on my phone to pick the cast member who will speak that night. After all, I am the bandleader.

DD: You have an extensive performance background. What have been some career highlights for you?

AK: Thanks, yes I do! Yesterday, I had to update my resume for a potential legal job. I’m also a CA-licensed lawyer. I’ll crib this answer right from my resume:

DD: Who are your musical influences?

AK: Too many to name but here are a few- bassist Ray Brown, especially his legendary records with the Oscar Peterson Trio, bassist Ron Carter, the Red Hot Chili Peppers, a Tribe Called Quest, and the Beastie Boys. I also really, really love the Philadelphia-based band, Dr. Dog! That’s just off the top of my head.

DD: What’s the best part of touring with the group?

AK: When you get to be around your supremely talented musician friends all the time, playing shows in cool places for amazing fans, and seeing the world for your job- those are the best parts. It keeps me in the touring game. Getting free food all the time is also not to be underrated!