Bex Odorisio returns to Philly next week with the cast of Hadestown. The Ardmore native is playing Fate in the critically acclaimed musical, a tale of love, hope and inspiration adapted from Greek mythology.

Hadestown will be playing at the Academy of Music on the Kimmel Cultural Campus February 9-20th.

Debra Danese: Who was the first person you called after booking Hadestown?

Bex Odorisio: I was actually with my best friend when I got the email. I was visiting her at her mother’s house in Arizona — she was working from home in her bedroom while I lounged in the bedroom next door. I saw the banner come through on my phone, got up, went into her room, and slid the phone across the desk without saying anything at all. She was finishing typing something but she did a double take, and then screamed, and I screamed. We did a lot of jumping up and down around the room together, and then proceeded to plan all the places she would visit me on the road.

DD: How would you describe your character to someone who never met her?

BO: She is a glamorous, poised, judgmental agent of chaos. This is a goddess you should not cross. She might be amused, or even entertained by you at times, but don’t let that fool you! She’s been weaving your story for longer than you’ve been alive, and she’ll turn on you in a moment to make sure that story unfolds exactly as she thinks it should.

DD: How did you prepare for the role? 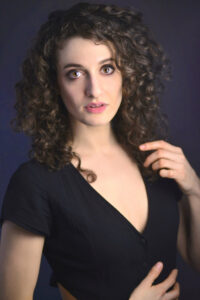 BO: I went back to Anaïs Mitchell’s recordings and her book about the lyrics of Hadestown. Even if certain lyrics or lines have been left behind over the development of this show, the spirit of those words are the bricks that built this world. I wanted to carry those ghosts with me into rehearsals. I also dove into some silent movies to remind myself what the doyennes of that age were doing with their eyes and faces. As we began tech rehearsals, I put together what I termed my “goddess” playlist, comprised of Amy Winehouse, Shirley Manson, Amanda Palmer, and other dark divas to fill me up with the sound and the power I needed to bring onstage.

DD: Performing in Philly as an Ardmore native, who are you most eager to have watching from the audience?

BO: I’m most excited to have my parents see the show! My mother in particular took me to a lot of theater in Philadelphia growing up, so I credit her with instilling this big dream in me. Hadestown is the first “big” show I’ve been a part of in my career so far. The grandeur of a place like the Academy of Music makes it feel thrillingly real.

DD: You studied in both New York and London. What did you take away that most prepared you for a professional career?

BO: I think I’ve always had a certain doggedness about me when it came to pursuing an artistic career, but my time in drama school thankfully solidified that quality into a full-on stubbornness. I was going to do this — period, the end! Ultimately, I found that my college education prepared me extremely well artistically and not at all business-wise. It’s taken me quite some time to find any footing in this industry. There have been many struggles along the way, but I think my hard-headed belief in myself is what has ultimately gotten me through.

DD: What is the last thing you do before stepping onto stage?

BO: I take a breath with my sisters. The Fates are a trio. We go nowhere without each other and that begins in the wings before the show starts. In a world like this one, where our very breath has been collectively held for years in fear of sickness, this small ritual feels like an act of affirmation, of remembrance, and of grounding, all at once.  We have each other’s backs and we trust each other enough to breathe together. The three of us gather in a circle, like witches of old. We breathe in, we breathe out, and then we step into the light.