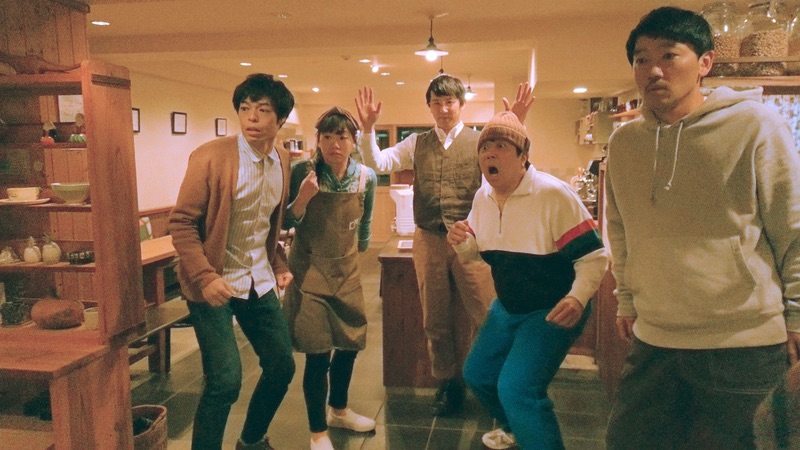 Time travel is my favorite storytelling device in existence. It’s a great way to explore a wealth of themes, and as a concept it’s just plain fun to think about. The best time travel movies tend not to get too hung up in the paradox-laden physics of it all, choosing instead to just let it all play out as straightforward as possible. It’s a smart move, given there are no time travel scenarios that can exists without paradox, but even so, the mechanics of a timey-wimey plot often become unwieldy all the same. This is very much not the case with Beyond the Infinite Two Minutes, which utilizes a simple idea to create a complicated plot, while magically keeping the whole thing accessible, fun, and difficult to poke through with logic holes.

The set up is simple: A cafe owner closes up shop and heads to his upstairs apartment. Upon arriving, he discovers that his live video feed from downstairs is broadcasting from two minutes in the future. When he heads down to confirm, he finds that his present circumstances are indeed precisely what he saw on his monitor two minutes prior. Naturally, this temporal flexibility piques his curiosity, and soon he and his friends are doing their best to exploit this tiny window into the future for all it’s worth.

It’s a lot of running up and down the steps (no explanation as to why our hero uses such long extension cords on his monitors), and a lot of clever layering of repeating scenes on increasingly small concentric monitors. It’s hard to explain, but the film gets you there with ease. The whole thing is presented as a single take, and impressively so (it’s not an actual single take, but you’d never know — and it was shot on a cell phone!). I found myself just as engaged with the story as I was with the heroic feat of filmmaking on display. This showcase of craft does not overshadow the material, however. In fact, it only enhances it. The urgency of the single take adds to the increasing level of panic our protagonists face as their silly circumstances get out of hand, and since the time travel mechanic is in the form of a livestream, it’s only appropriate that we never cut away.

At a brisk 70 minutes, Beyond the Infinite Two Minutes is a masterclass in maximizing imagination, both on the page and in production, to mitigate any budgetary limitation which may prove noticeable on screen. There’s just no time to think about such things when you’re so busy having fun.

Beyond the Infinite Two MinutesJunta Yamaguchi