The mood of My Heart Can’t Beat Unless You Tell It To is immediately apparent. Quiet and dark, one could be forgiven for finding it rather peaceful, if not for the oppressive sense that something horribly twisted looms at the edge of every moment. Our opening scene sets the rules with nary a word spoken. In it we find Dwight (Patrick Fugit) offering a ride in his car to another man. The dialogue makes it clear that this man is a stranger, and that the terms of the favor being offered are not concrete. There’s a tension threaded through their slight conversation which is soon broken by a shocking act of violence. Dwight was not offering a favor but running an errand.

You see, he and his sister Jessie (Ingrid Sophie Schram) have a unique responsibility in caring for their younger brother Thomas (Owen Campbell), namely that in order to keep him healthy, they must have a constant supply of fresh blood for his consumption. Thomas has a mysterious illness (well, not that mysterious), which requires him to remain closed off from the world, feeding on sanguineous rations extracted from unfortunate strangers. 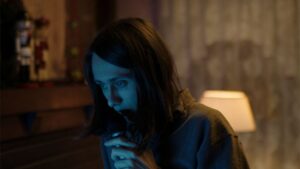 The proceedings are rather bleak, chronicling the tensions that come with such an arrangement. Dwight and Jessie struggle with the morality of their predicament, as well as the extent of their responsibility for their brother’s continued existence, while Thomas wrestles with the desire to have any sort of life whatsoever outside of his home. Plot-wise not much happens, but that’s not really the point of the film. If anything, it proves to be an actor showcase, and what a showcase it is! All three of our leads give intensely emotional performances using very little dialogue. Together they create a realistic portrait of a family stuck in a destructive pattern that, at least at one point, was rooted in love rather than habit. One could probably draw a parallel to the struggles of loving someone with an addiction problem, but I’ll leave that on the table until I can get a second viewing under my belt.

Patrick Fugit, who most recognize as the Cameron Crowe analog in Almost Famous, puts on a hell of a show here. Gone is the starry-eyed visage of a teenager entering adulthood via rock and roll, now replaced with the dogged, exhausted face of a man forced by familial responsibility to become a monster he’d never have had the stomach to otherwise be. Fugit’s ability to switch between meek and threatening at a moment’s notice without losing the humanity held within Dwight’s heart is remarkable, and alone worth your ticket price.

Writer/director Jonathan Cuartas has a keen eye for camera placement. Alternating between a passive fly-on-the-wall perspective and one where it anticipates future actions while in motion, it’s hard to look away from the screen even when little action is happening. And when action does occur, it does so suddenly and unexpectedly. There are a few truly shocking events that drew gasps in the moment and have stuck in my memory since, but perhaps the biggest compliment I could pay the film is that the most upsetting imagery is all of my own making. What I mean to say is that a lot of horrifying things happen offscreen, and even without seeing the explicit violence, its impact is deeply felt.

Composer Andrew Rease Shaw does a lot of heavy lifting in terms of creating the film’s dour, nauseating mood (this is a good thing). Harsh, dissonant tones give way to soothing, smooth ones, with nary a percussive pulse. While never busy or oppressive in how it relates to the events on screen, it is always there, lingering in the same shadows where our fears also lie. Is there ever a moment where the characters can exhale, confident that there is nothing left to worry about? Nope. And the same goes for the viewers — Shaw’s score is fundamental in creating this heavy physical response.

Some viewers may rub up against the overall feel of the film, which could accurately, though not derogatorily, be labeled “sleepy,” but those who can get into step with it will find a very rewarding feature to chew on. No, there’s not a lot of new ground being tread here plot-wise, but some new thematic threads are being woven through an old thing, while also offering a solid platform upon which to display a handful of uncommonly good performances. My Heart Can’t Beat Unless You Tell It To is one to sit with for a while, and which will stick with you long after it ends.