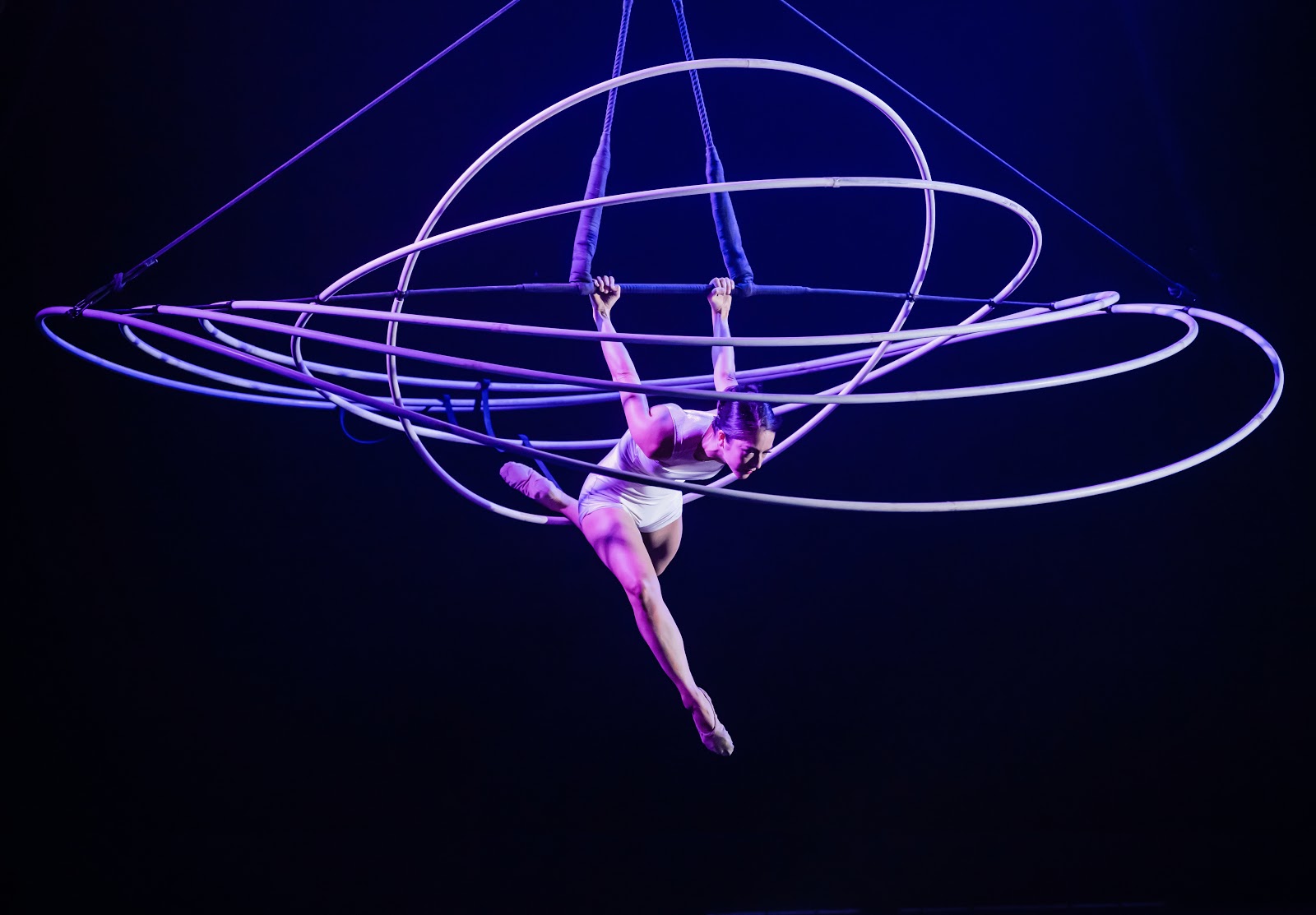 EVENTIDE is a visually impressive showcase of professional circus talent held together by a thin plot of romance, heartbreak, and redemption.  The 3AM Theatre troupe is comprised of the show’s two main characters, Kyle Driggs and Andrea Murillo. He is an accomplished juggler; she’s a dancer, trapeze artist, and a good juggler in her own right. Luna Deasy joins them to literally add sparkle as she contorts her way across the stage, covered in gold sequins, although her role is as ambiguous as the story’s conflict.

The performance has some strong visual touchstones throughout. The first scene is perhaps the most stunning. Murillo, in gold frills, is alone on a black-and-white flower printed stage, holding red flowers in a simple vase. Drums and sticks beat an ancient rhythm. She slowly begins to rise and spin, hanging by her tightly knotted hair. Her serene gaze and graceful movements radiate divinity as her limbs and costume form a human flower over the stage.

When we see Murillo again, she’s a mere mortal, bound by gravity. Her noisily-patterned partner (Driggs) comes home by way of treadmill, embodying Gene Kelly, flipping his hat and cane, and mugging at the audience. They dance playfully to music that is simultaneously cheerful and ominous (by Sean Hagerty), and Driggs juggles balls, hat, cane, and a new umbrella without missing a beat.

There are funny moments when Murillo goes for a walk. She flops and folds over herself on the treadmill, but her frustrated emoting seems to come from nowhere. When she returns home, they dance-fight with the help of a strobe light. Their dancing is most interesting when it incorporates juggling together, but falls a bit flat when it’s just dance. Some of their break-up moves include head exploding motions, stomach clenching, and even throat-cutting, which feels too on-the-nose for such an abstract narrative.

The highlight of the show comes with Luna Deasy’s feature. She first appears during the initial scene change as an Igor-like stagehand, creepy-crawling across the stage to place a prop. She pops up throughout the play as a sort of imp, giving the characters gifts and possibly even controlling them as she contorts on the stairs.  She is in her full demonic glory after their fight. She performs on a red-lit table, twisting into impossible shapes with incredible strength and fluidity.

After Deasy’s tour de force, lighting (by Rider Stanton) takes center stage. On each side of the stage are matching His and Hers glowing portals that resemble the arch on top of a wedding cake. Each lover stands on one, moving the lights from side to side with a sweep of the hand. Everything, including the Rodarte-like costumes (Oana Botez), is glowing white with the aura of an old MGM dreamscape interlude.

For the climax, a trapeze surrounded by giant white concentric circles descends as Driggs pulls out white juggling rings. Both of their works are technically impressive, but the giant circles aren’t really used in any way, besides reflecting the juggling props and taking the obvious wedding ring imagery to the next level. The denouement is more emotionally effective. A circle of red umbrellas are reminiscent of the red flower petals, and the couple rotate and juggle them together, catching what the other let fall: a beautiful symbol for a strong relationship.