In 2013, having just graduated college, theater writer and educator Josh Herren was drinking cheap beer and watching the Merryl Streep movie Julie and Julia. The 2009 film, written by Nora Ephron, depicts a young woman, Julie (Amy Adams), who spends a year cooking every recipe in a Julia Child (Streep) cookbook.

“I was feeling very aimless in my life,” says Herren. “as is Julie is in the movie.” Following his own love of theater, he decided to make a blog Josh and Joseph, in which he’d read every play which ever won a Pulitzer Prize for Drama and write about.

He got a few pages into the first winner, 1918’s Why Marry? by Jesse Lynch Williams, and put the project on hold. Come March 2020, and everything is on hold. Herren decided to revisit the idea as a podcast. 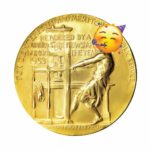 He recruited Phindie editor Christopher Munden (that’s me!) and playwright John Rosenberg to join him on a new podcast. Each week, they read a Pulitzer-winning play and discuss it. The new project, Chosen by Committee, is available on Apple Podcasts, SoundCloud, and other platforms.

In between episodes, they recruit actors to read a favorite scene from the work (those mini-episodes are numbered “.5” in the feed). Episode 1.5 (above) featured a scene from Why Marry? read by local actors Jennifer Childs and Scott Greer. Other actors to have contributed to the first few readings include Jenna Kuerzi, Alice Hakvaag, Jennifer Summerfield, Zoe Nebraska Feldman, Katherine Perry, Brandon Walters, Paul Kuhn, Judy Gallagher, and Langston Darby.

Listen to an episode now: