A tongue-in-cheek recounting of some of the sexier moments of King Arthur’s rule, COURTLY LUST attempts to do it all—just like the knights of old. Comedy, kink, and wit combine, tied together with a hilarious disregard for the tenets of theater and storytelling. All of the classic moments of ancient tales are turned on their head, to great effect. 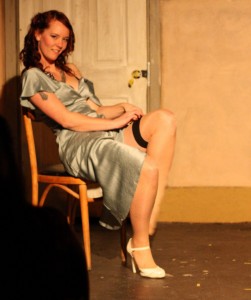 If this quirky retelling isn’t enough to grab your interest (though it is), there are burlesque numbers with a royal twist scattered throughout the show. As the story unfolds, members of court and country strip down to pasties and panties in time to selections including “Hell Broke Luce” and “She’s a Lady.” Hooting and hollering is encouraged, and it’s impossible not to, as charisma and sexy enthusiasm radiate from every cast member, stripping or otherwise. A down-on-his-luck Merlin, guide and narrator through the alternative quests of the evening, adds a special dose of magic to the performance.

Though the stage setup was minimal, costumes were elaborate and varied for a production of this size. However, the design just supported the perfect comedic timing and commitment of the actors who turned would be rather amusing jokes into side splitters. While a few times there seemed to be a stumble or crashing backstage, it simply added to the offbeat charm. The only thing to really watch out for are laughter induced injuries. October 16-26, 2013, walkingfishtheatre.com.