“In the realm of the unknown, kids and adults have pretty much the same needs: courage, resilience, protection.”  THE SNOW QUEEN director Whit McLaughlin 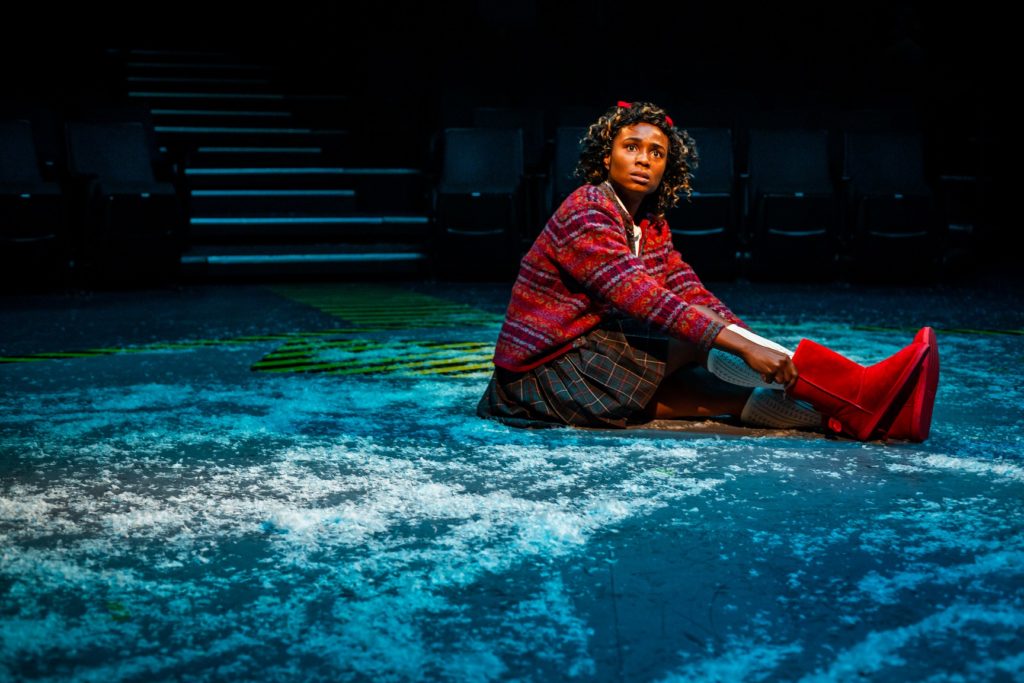 Lovely young Gerda (Eunice Akinola) has a fine boyfriend, Cei (Daniel Ison). A magic mirror cracks. Splinters of glass hit his eye and his heart. He falls under an evil spell and disappears, a prisoner of the wicked Snow Queen. Gerda embarks on a desperate search to rescue him. Despite fear and troublesome encounters, she is brave and carries on, like Candide or spunky Alice in Alice in Wonderland. Gerda’s red boots are like the ruby slippers in The Wizard of Oz. On her journey Gerda befriends a Robber Girl, out-dances a Robber Woman, encounters a grandmother, talking flowers, a bunch of Trolls, and more. And she meets (cue the music) the frightening Snow Queen (musically gifted Katherine Fried).

Hans Christian Andersen believed that children can handle dark forces. He took a cold Norse approach in his long children’s story, The Snow Queen, which stretches through 7 chapters. Enigmatic and quite sophisticated, the work reminds me of Bruno Bettelheim’s The Uses of Enchantment. (*See note below) English playwright Charles Way tightened up Andersen’s story, removed religious aspects, and made the child protagonists a bit older. Like the fairy tale, this play isn’t sugar coated. Throughout various challenges Gerda is in jeopardy. Chillingly, she’s told that “The roses are in the ground where the dead are.” Director Whit McLaughlin notes in the show’s program that “Adventure demands that we endure, even enjoy surprises, good and bad.”

Staged in the round and skillfully directed, this Arden production works really well. Accomplished actors appear in multiple roles with lots of entrances, exits, and complications. Rows of children in the audience sit transfixed. While the play is not really for toddlers, several well-behaved tiny tots enjoyed the songs, violin, guitar, and accordion solos performed by cast members. And the kids had interesting things to look at, especially the large mirror structure above the stage, the incredible sparkling Snow Queen costume, and the softly falling snow.

*RE: Bruno Bettelheim’s The Uses of Enchantment: “Each fairy tale is a magic mirror which reflects some aspects of our inner world, and of the steps required by our evolution from immaturity to maturity. Folk fairy tales remain the most satisfying and revelatory type of children’s literature; that, though set in never‐never lands and dealing with palpably fantastic events, fairy tales conduct a “moral education” subtler and richer than “any other type of story within a child’s comprehension.” (John Updike)

One Reply to “THE SNOW QUEEN (Arden Children’s Theatre): Not a sugar-coated fairy tale”