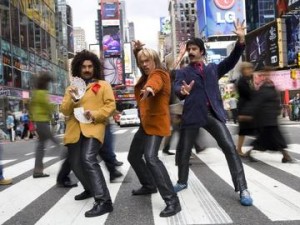 In the new FringeArts building, we are presented with what looks like a floating basement, decorated many decades ago, sitting on sloppily placed cinderblocks.  Out of pure gray smoke, three jokesters appear.  They all look like they could be Napoleon Dynamite’s good friends.  They are Dennis Diamond, Louie Magic, and Daryl Hannah (Geoff Sobelle, Trey Lyford, and Steve Cuiffo) —Daryl Hannah the magician and clairvoyant, that is, not the other one.  As Hannah proclaims quickly, “We have christened the FringeArts…with intermingled imagination!”

This “intermingled imagination” is a combination of hasty distractions, hilarious illusions, ridiculous dancing routines, (performed by three grown men with three different yet perfectly groomed mustaches), confetti, fried eggs, a few philosophical moments, and more.  With a perfectly balanced ratio of true performance, traditional and nontraditional magic tricks, and audience participation, it is utterly impossible to be bored. It is not thrilling to see the first show ever at the new FringeArts building incorporate not one but several uncomfortably drawn-out jokes about child molestation, but THE ELEPHANT ROOM is still a fascinating and, mostly, a remarkable place to visit. October 11-20, 2013, fringearts.ticketleap.com/elephant-room.