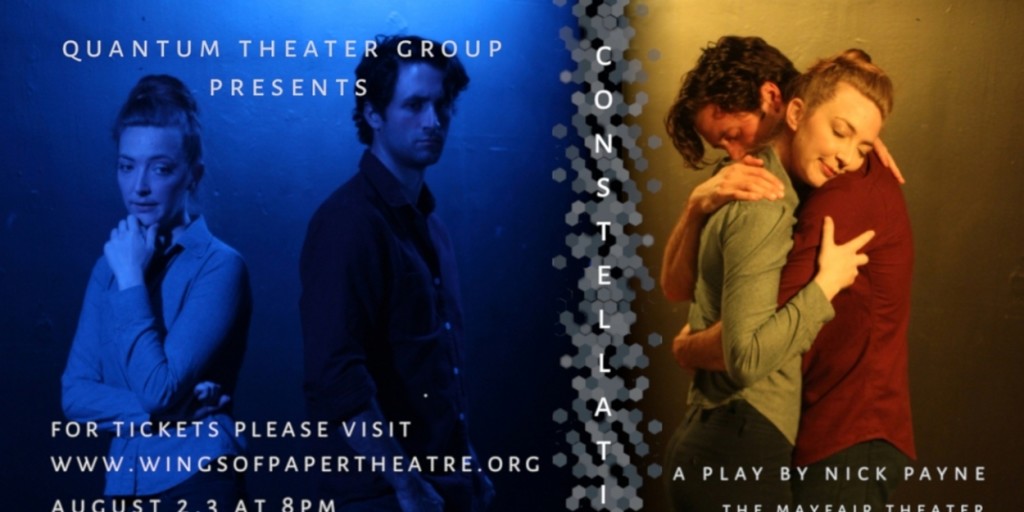 We have a hopping theater scene in Center City. And South, North and West Philadelphia all do their thing. But a live production in Northeast Philadelphia? Is it a misprint or a miracle? For its inaugural production the Quantum Theatre Group in conjunction with Wings of Paper is staging Nick Payne’s CONSTELLATIONS at the Mayfair Theater, a tiny Black box on Frankford Avenue. It’s got a kind of no-frills charm and not a whole lot of seats.

An intimate story unfolds about a physicist, a beekeeper, and— you know, chemistry. Kristin Devine and Kevin Dejesus-Jones, both experienced and capable actors, negotiate and dissect a world of simultaneity and alternate possibilities. Adam Maggio’s direction keeps things moving— at times with too obviously engineered postures. And the lighting often wants grace, as harsh white light bulbs glare in your face. Yet this is a fine production and it’s exciting to have a new Northeast Philly theater company.

The re-play of scenarios, a different version each time, bumps into a problem when the concept of infinite possibilities is brought down by one possibility that hadn’t been considered. This is a good production that would become even better if there were a long run to smooth out the edges. At the end a member of the Quantum Theater Group tells us, “If you didn’t enjoy the show, know that there’s a parallel universe in which you did.” [Mayfair Theater, 6243 Frankford Avenue] August 1-17, 2019; eventbrite.com/e/constellations-tickets-62229768914