“A lot of the show is about finding who I am as a gay man from the South through the music of Judy Garland, since she is one of my childhood heroes.” Tyler Houchins

We all have our childhood heroes. Tyler Houchins looks back to musical icon Judy Garland, returning with his  evening-long celebration of Judy’s 50 years on the other side of the rainbow. Ahead of his pride month performance June 22, 2019, at L’Etage Cabaret, he talks with Henrik Eger about his life, from being bullied to falling in love with Judy Garland. 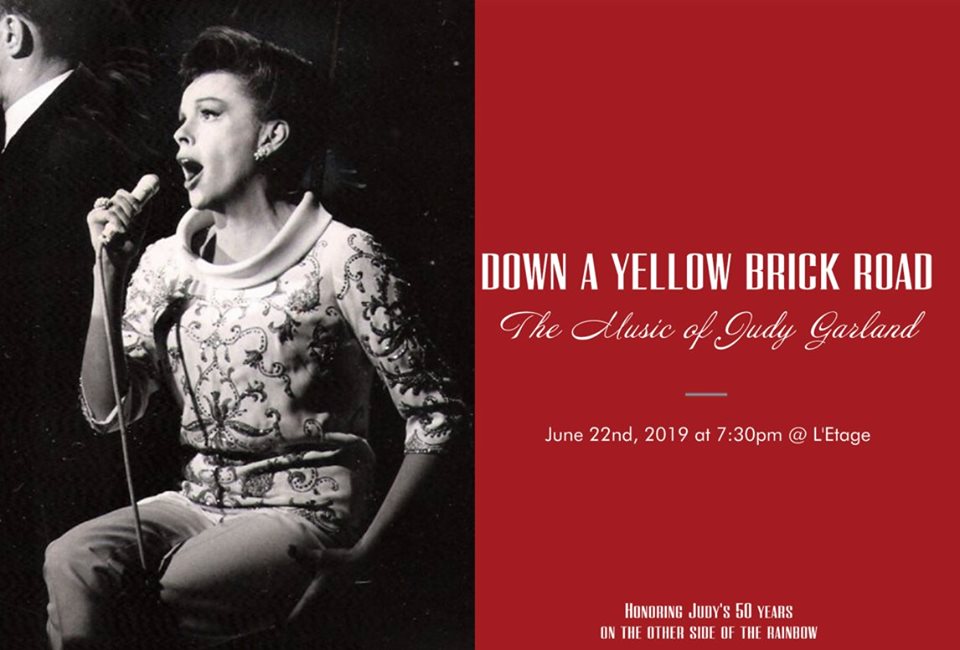 Henrik Eger: You grew up in the South.

Tyler Houchins: Yes,I was born in Prince George, Virginia. It’s a pretty small Southern town–every school I attended, elementary through high school, was across the street or in the middle of a cornfield.

My relationship with the South has been quite complicated. I knew pretty early on that I was not like other boys my age. I liked to dress in women’s clothes, sing show tunes while riding the 4-wheeler through, yet, another cornfield. And I thought one of the Backstreet Boys was going to be my husband someday. I was looked at in a different way because no one understood what was happening. 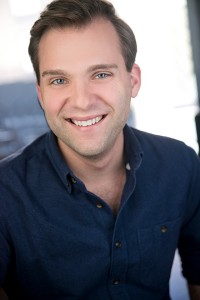 Henrik:To survive, were you able to hide your feelings?

Tyler: When I realized that I was gay, I tried hard to make it go away because people thought it was bad and dirty, and I thought it was sin. I don’t think anyone said that to me, but it was ingrained in the culture, and I resented it. My reaction to my own identity shut me down and made me feel like I wasn’t worth anything. I still struggle with that.

However, growing up in the South made me feel grounded. I have a great family that has supported me, given me tough love when I needed it, and has embraced my life experience, which keeps me connected to the South.

Henrik: How did you discover Judy Garland?

Tyler: My first exposure to her work was The Wizard of Oz. I was intrigued by a film about her life, Me and My Shadows: Life with Judy Garland, based on a memoir by her daughter, Lorna Luft. I probably was 10 or 11 when I saw that film while on a family vacation. This is crazy to say, but I remember being surprised that Dorothy was not actually “Dorothy.”

So when I got home, I pulled out my copy of The Wizard of Oz on VHS, flipped it over, and saw Judy Garland’s name on the back. After that, I did much research on her, including watching Me and My Shadows in its entirety, which led me to her Carnegie Hall concert. I listened to the recording of that show until I knew every word. I couldn’t really explain why I was so attracted to her until much later.

Henrik: How do you explain your personal connection with Judy Garland, an icon in the gay world?

Tyler: Living in an environment where I felt I couldn’t express openly who I was and how I felt, all of a sudden I experienced a force of emotion that made me feel OK. When she sang, she did so in a way that seemed like she was pouring her guts out as if she didn’t have a choice—it just happened. She seemed to make everyone feel like she was singing only to them—not many people have that ability.

Henrik: What were your first experiences with theater?

Tyler: It was during my 2nd grade year. Our class did a show: The Boy Who Cried Wolf. I was not the boy. I played a baker in the town. We were all standing in a straight line across the stage, and everyone had some kind of line to say.

When we got to me, I said my one line but that one line became a 5-minute monologue that I made up in the middle of the performance. Everyone in the audience started laughing because my teacher, from her seat in the front row, was frantically signaling to me to stop—but I kept going. When I eventually stopped talking, I took a bow and walked off the stage. I was hooked!

Henrik: When did you realize that you experienced life differently than many other boys and how did they respond to you?

Tyler: I knew at a pretty young age that something was different. I had a big crush on a boy in my 1st grade class. Around that time, I started to question myself. As I got older and attended Middle School, I knew that I was gay and so did everyone else. I never said it and I defended myself as much as I could when someone called me gay.

When I came out in Junior High School, everyone was faced with something that they were not familiar with–students and teachers alike. Every day, there was someone calling me a “faggot” and making fun of me for being gay, but it didn’t get scary until High School.

Henrik: How did those experiences affect you?

Tyler: It got to the point that it was impacting me emotionally. I would drive to school—always late. As I walked from my car to the front of the building, I had to walk by a class outside the workshop building. A group of guys in that class would yell obscene and threatening things as I would walk by. It got to the point that I had to be escorted into the building by the Vice Principal.

I don’t dwell on those experiences any longer because I have moved on. On the contrary, I feel that my coming out in high school was a good thing for everyone. It exposed people to something they had not experienced before. At the time, a lot of the boys didn’t like it, but I hope that by now they have gained some understanding of the world that we live in—outside of their small bubble.

Henrik: What made you leave the South and come to Philadelphia?

Tyler: Philly was not on my radar until a HS friend moved here to attend The University of the Arts (UArts). After hearing all about the school, another friend and I drove up to audition. I was accepted into the UArts Musical Theatre program, and I took the opportunity to learn more about what I loved doing.

Henrik: Who were the three teachers at the University of the Arts who impacted you and your work the most?

Tyler:Only three? Let’s see . . . Patricia Raine who forces her students out of their comfort zones and tirelessly makes sure that every choice is in service to the story that is being told. D’Arcy Webb, my Voice and Speech teacher who opened my eyes to cabaret, my world, and continues to be a source of inspiration to me as a singer and a human. Allen Radway who gave his students the freedom to play and find their own way of perfecting their craft. I am surprised how hard it is to come up with a select few. All of my teachers taught me some invaluable things that I still ponder and practice.

Henrik: What did you learn about yourself as an apprentice at the Walnut Street Theatre?

Tyler: I started out as an Audience Services Apprentice so I didn’t come in contact with the stage. There would be days that I would sit in the theatre alone and stare at the stage because I knew that it was where I belonged. I took advantage of the fact that I was working in close proximity to many well-established Philly actors, got their advice, and gained a lot of insights from them. The year after my apprenticeship, the Walnut gave me the opportunity to act on stage a few times. I am grateful for all those experiences.

Henrik: Tell us about your cabaret and theater experiences in Philadelphia.

Tyler: I did my first solo cabaret right after I graduated college in the Red Room at Society Hill Playhouse. I then moved to a production of They’re Playing Our Song with Center City Theatre Works. I also did two cabarets with Tom Wilson Weinberg.

I was cast as an understudy at the Arden and the Walnut and was hired to act in A Christmas Carol and Zombie in Love, both part of the Walnut’s wonderful children’s theatre program. I also played Horatio in the REV Theatre Company production of Hamlet.

Henrik: I heard that you are bringing a lot of joy to enthusiastic seniors these days.

Tyler: Thank you. Yes, I am performing our Yellow Brick Road show with Philly Senior Stage in retirement and health care facilities around the Philadelphia and New Jersey area. These are fulfilling experiences, observing audiences who relive vivid memories of earlier days through the music of Judy Garland.

Henrik: You’re now presenting your own show at L’Etage, Philadelphia’s most popular cabaret—Down a Yellow Brick Road: The Music of Judy Garland—your musical love letter to one of the greats in American musical theater. You said that “A lot of the show is about finding who I am as a gay man from the South through the music of Judy Garland, since she is one of my childhood heroes.” Tell us more about it.

Tyler: I believe music is an extension of us. It speaks to our emotions in a way that no other art form does, so the music that I chose for this show is music that I have grown connected to and that I have some life experience with. While researching the songs for this program, I realized they came from a great depth in the work of those writers and composers.

I hope that the audience will recognize this music as something deep and profound. I hope they will see a young man who is passionate about life, love, music, and Judy Garland—unafraid of it all. And I hope audiences will find some connection to their own lives through the stories that I share, especially as my show has a pretty personal touch to it.

Henrik: Tell us about your accompanist.

Tyler: That’s Jeff McDonnell, the musical director and pianist for all performances. Heand I put our heads together about five years ago to put this cabaret together. Working with him has been a dream. He is as passionate about Judy as I am, and he has a wealth of knowledge on her songs and the music that was written during her time. It’s a pretty special thing when a singer finds a collaborator who speaks the same artistic language as Garland and her composer friends: magic that I cannot put into words. Jeff is the Mort Lindsey [“pianist, conductor and musical director for Garland”] in my Judy Garland show.

Henrik: What are your professional plans for the future?

Tyler: I’ve fallen in love with cabaret. It’s an intimate conversation between an audience and the performer. I am planning on cultivating more opportunities for cabaret performances in this city. Jeff and I are putting together another show for the Fall/Winter season of 2019.

Henrik: I’m sure Judy Garland would have loved to experience your cabaret, your joy, and her music that you, as a liberated young gay man from the South, bring to numerous audiences. Break a leg!

One Reply to “Up and Over the Rainbow: The Impact of Judy Garland on the work of Tyler Houchins”