Have you ever had to stay overnight in an airport waiting for your connecting flight?

Hella Fresh Theater’s LET IT SNOWDEN, a play in two acts, presents the ridiculous paradigm of being stuck in an airport in Moscow at 3:00 a.m., where conversations between two employees of a children’s clothing line (Jenna Kuerzi and Emily Dale White) tear down the walls of a working friendship.

Though meandering, the conversations center on one woman’s interaction with Edward Snowden, who playwright John Rosenberg presents as a traitor, whistleblower, and human being. In her relationship with Snowden, the woman defied the boundaries of who and what they stand for.

.LET IT SNOWDEN is set in the twilight, gloomy interior of an airport in the middle of the night. When you first walk in to the space, you’re not sure where you should sit, because the stage is scattered with chairs and the same chairs are provided to the audience. It’s one big airport terminal with the sporadic sounds of airport traffic, an ambiguous shuffle of metal conveyor belts, and a clerestory of echoing voices.

With his setting playwright John Rosenberg takes us into the heads of the two characters, as we relate to the anxiety of missing a flight, and the surrounding of bag checks, metal detectors, and constant surveillance. The shadows across the face of Emily Dale White seem cast by the unidentifiable imposition that was revealed by Snowden’s security leak with the U.S Government. White’s voice rings loud and clear, but her profile is mostly in the dark.

Rosenberg’s Hella Fresh Theater is a DIY theater based in Kensington’s Papermill Theater. Rosenberg wants to make the space for artists to create new work, with audiences ready try anything. It is like a Play Penn workshop reading, but with more artists than scholars in the audience, and the location in Kensington brings to the front social change. Because what is theater without an imperfect world? There wouldn’t be any reason to get up on stage and flap our wings if there was never the idea that people have lost all control.

The characters have this great idea, “Perfume Mouthwash…gargle, and spit”, some kind of joke about bourgeoisie, or some ingenious commentary on beauty that creeps into our consciousness like poverty, a right to privacy, or the stench of a homeless person. Or into the consciousness of a person stranded in an airport for 24 hours.

The power of an airport’s alien mechanisms make face-to-face human interaction more difficult. The exploration of the globalization of industry and the monetary value of life recapitulates actor Jenna Kuerzi’s own show, A Retrospective on Late Stage Capitalism, which she performed earlier this year. When the news captures a story, and perpetuates a media frenzy, “the hypocrisy and absurdities of capitalism digs its own grave.”

LET IT SNOWDEN questions whether we can be both people and employees and explores how we relate to each other in the alienating contexts which modern life provides. It shows the humor of our greatest ideas decaying faster than the shortest living organism.

A mayfly only lives for 24 hours. If this is useless information to you, consider what our own expendable habits of pleasure would communicate to the larger universe if they were being watched. Then consider that Snowden showed that we may be being watched. 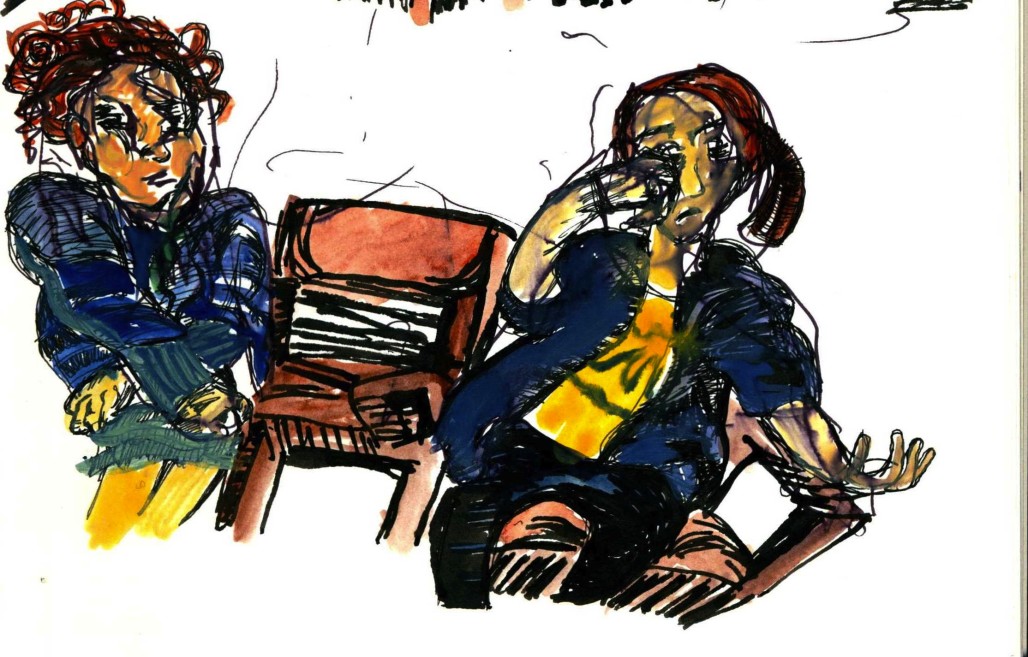 Theater takes us out of the fictional world we occasionally mistake as real. But what we really seek is this precise drama to retain our identity and cherish purpose in our life. Take that away and all hope is lost. This is a satire on the paradigmal interior of a controlled hierarchy, an ecosystem where the dollar bill is first and foremost and all kindness is adulterated. The conditions which bring these two characters together grow tiresome. The comedy flickers as if we’re uninterested and tired in a late-night layover in an airport in Moscow. But our feeling that we are observing life take place in a deceptive parasite-host transforms from surveillance into sousveillance.

One Reply to “Theater in Sketch: LET IT SNOWDEN (Hella Fresh Theater)”