June-14-16, Automatic Arts put together an art show with real action as part of SoLow Fest: PEOPLE ARE STRANGE and other revelations. The performance spread out throughout the Da Vinci Art Alliance. As part of SoLowFest 2018, these separate acts total a sequential event. Part of the long prevailing SoLowFest, performing artists make a name for themselves and audiences plan to move from one Philly neighborhood to another to catch as many performances as they can in one day or by the weekend. The festival presents artwork based on a theme, STRANGER THINGS HAVE HAPPENED. PEOPLE ARE STRANGE and other revelations by Automatic Arts looked at the comedian, and the seriousness of his character compared to a serious bravado. The variety of comedy opened my mind to these actors’ art and sense of light and dark humor. Even the most dramatic lighting reveals a hysterical revelation about the connections we draw from daily life and what is put on a stage. 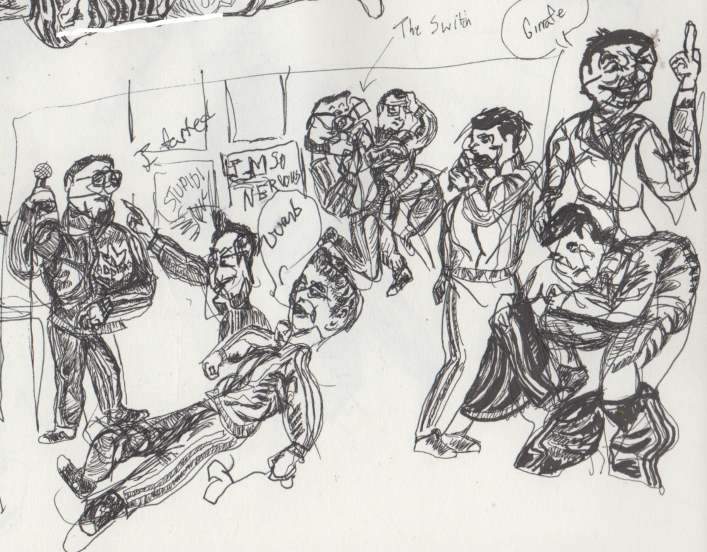 The Rabbit, the Giraffe, and an outspoken audience member in the first piece by Nikitas Menotiades used a ‘Dr. Jekylle and Mr. Hyde’ impetus to push the boundaries. “That’s My Time” makes impersonations, and latent jokes that created a lofty mood. The person in the audience, played by Menotiades, made rude comments and was uninterested in the comedy show. The reversal of roles showed an inadequacy brutally critiqued by modern values. Stereotypes and their extreme depictions left animal, plant, and human all melded into one. We planted ourselves in the audience and expected a genre to reveal itself. Comedy, bad comedy, and it made confusion feel contagious. So much that, Menotiades, made an impersonation of the audience and whips around in a tornado of back and forth personality changes. It was as if a new person took over and continued the show with a series of impersonations and shed a hard exterior shell. The commitment to finish though became over whelming apparently, when Menotiades began to cry at the microphone. Exercising emotions might take dancing off that hard shell. The magic was when everyone’s mind focused on the same thing, when the art pretended to be a giraffe or imagining we were in Africa.

SoLow Fest features artwork that explores lecture and presentation, identity and place, or fact or fiction. In my opinion, Josh McIlvain demonstrates unspoken honesty and misconceptions. Undulating lights triggered by McIlvain in the end captured a depth out of the darkness. The studio lighting evoked an unsolved mystery. Light, space, shadow, and color as the story developed enhanced the tour of a massive stretch of time and space, a true mockumentary of human behavior. “Away” imagines if people are really, actually here. Or are we stuck ‘here’ never really going anywhere, and the changing lights were part of a galactic exploration of past, present, and future people. It was interesting how it attached a median, context, or setting to the 2 or 3 character actors in the program. An approach to disillusionment showed true practical analogies. For example, making something, say lemonade when life gave you lemons was not entirely necessary because lemons are enough already made for our enjoyment! Opening up ubiquitous sayings were maybe a reference to Ben Franklin’s Poor Richard Almanac. McIlvian showed the power of common sense about the world to reveal insignificant facts with a simple discovery. 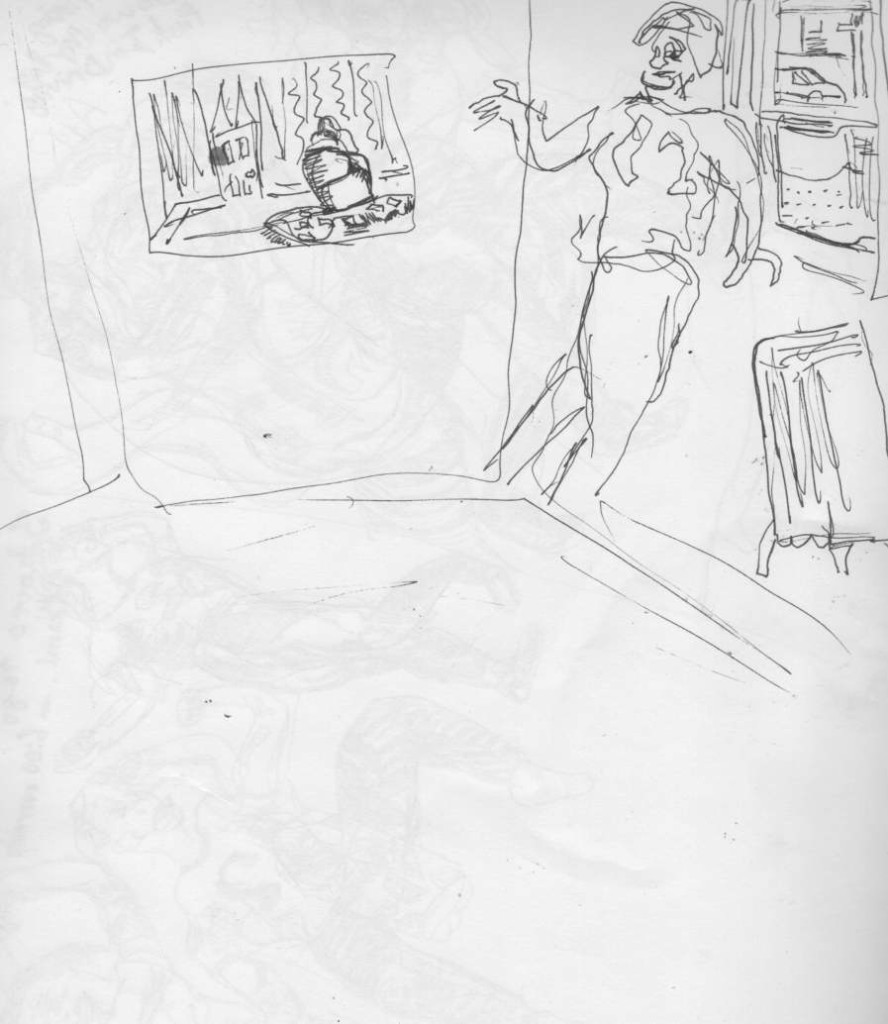 Tara Demmy took us down memory road and exaggerated realistic epiphanies while on a road trip. The feeling that things seem so much more important ‘in the moment’ translated enthusiastically, ‘you had to be there’. “Key West or Bust” dramatically sifts through eyesores that occur while on a twenty three hour car ride. Intentional or not, Demmy’s tight jeans were an amusing comparison to the way we would be uncomfortable driving for that amount of time. The joke was on the expectation, and anticipation upon arrival. It was a stretch to imagine unable to resist going to the bathroom while falling asleep at the wheel. Without teleportation, driving to Key West is an extreme measure to travel in a car. When Demmy finished telling, a road story the destination continued to reap unfavorable. Demmy’s old dirty t-shirt represented the epic hero, and so the road warrior meets the power of the sun at the southernmost tip of America. I could not help but think of her super power to step into a pile of shit bigger than imagined and return to talk about it. 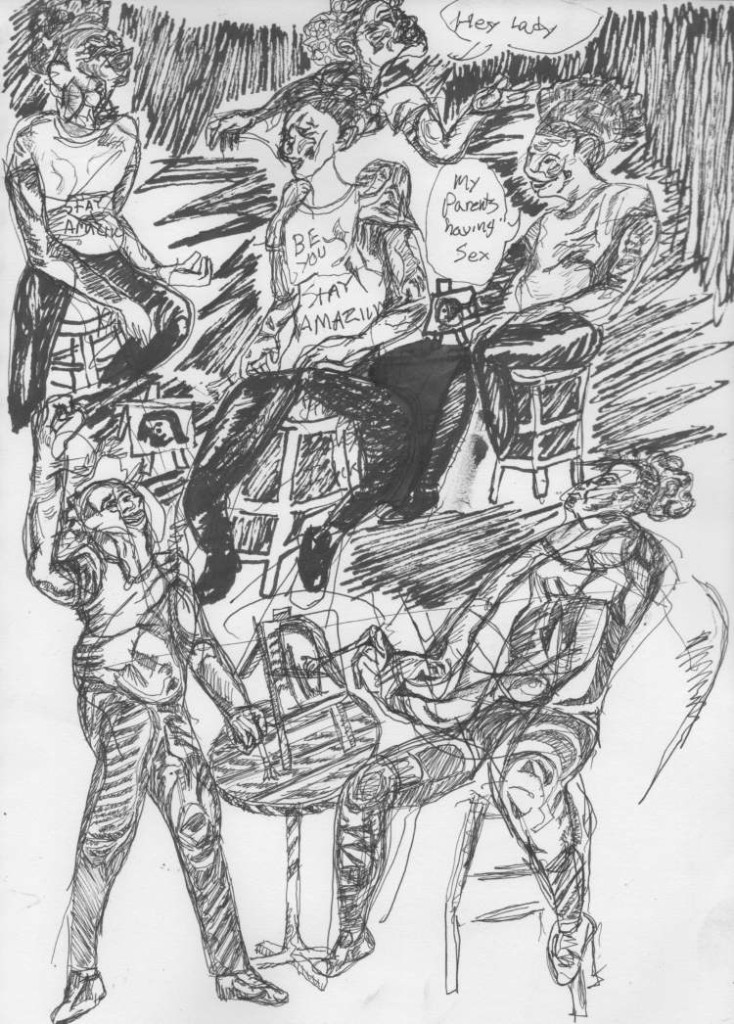 The last performance In the program was directed by Josh McIlvian and Marissa Kennedy, and performed by Marissa Kennedy. “Friend” lights came up on an artist working at a table easel. The soft glow and calm voice internalized a consciousness unaware of the world around them. Kennedy seemed to sulk in her memories and thoughts as she put a brush to the canvas. The artistic temperament slowly rekindled memories of friends in the past, and time lost only to return to a pathetic reunion. The unemotional tone in her speech drew focus to a tilt in her eyes and LOL when she remembers her parents having sex or a sexy Polish neighbor rinsing off with a hose on a hot day. The low energy of the performance had certain climaxes like actually standing up and acting out holding the hose above her head. She did not seem to want to over exert herself, and even that was like lifting a log rather than a garden hose. The gravity around the artist was dense. The expression of the lighting created a void. The atmospheric light and shadow cast a solitary mood. The inanimate performance mostly reflects the expanse of time and the agenda items in the program entirely. The artistic spirit physically and mentally in rapture.