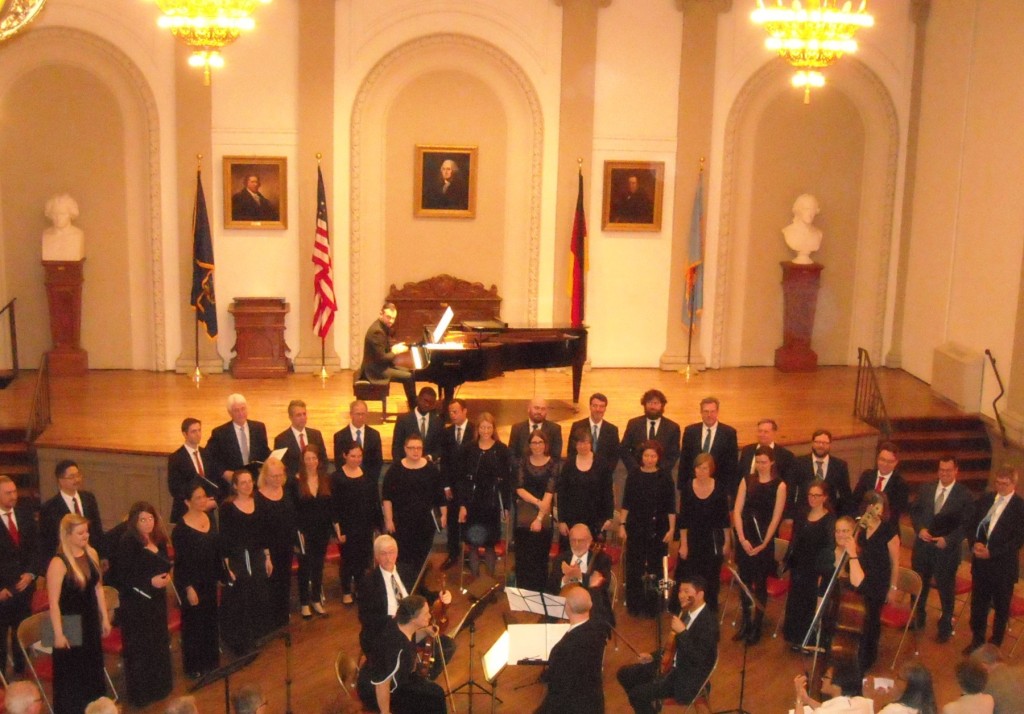 Frederick Delius was by no means a practical man. The composer created scores which call for a very large orchestra, chorus, and a few good vocal soloists. Today, an orchestra might assemble that many musicians for a work of Gustav Mahler, but it rarely happens for the works of Delius. With a creative arrangement, however, substituting a string quintet and piano for the full orchestra, the Wister Quartet and Choral Arts Philadelphia gave their audience a rare chance to hear the Delius Songs of Sunset.

This was the final concert sponsored by The Delius Society of Philadelphia, which is suspending operations after forty-two years of organizing concerts, films, lectures and symposia to promote the music of Frederick Delius and other British composers in the Philadelphia area.

The concert began with Ralph Vaughan Williams’ Serenade to Music, another ambitious piece written for sixteen solo singers and a full orchestra. Conductor Matt Glandorf made sure the balance of sound was just right for the Barthelmes Auditorium, a very live room. Mark Livshits kept the piano sound delicate and unobtrusive. The weight of the deep resonant voice of baritone Jean Bernard Cerin’s “The motions of his spirit are dull as night”, the lightness of Jessica Beebe’s calm and radiant climb to a whispered high A in “Of sweet Harmony”, and the quiet string cadence to a D major chord showed the well-structured outline of Vaughan Williams’ work.

Lord, let me know mine end, the sixth of Sir Charles Hubert Parry’s Songs of Farewell, is a disturbing cry of despair which the a cappella voices rendered beautiful and poignant.

The concert concluded with Delius’ Songs of Sunset, a setting of poems by Ernest Christopher Dowson.  Delius scored the piece for a massive orchestra, soprano and baritone soloists and chorus.  Hearing Choral Arts Philadelphia, with soloists Jessica Beebe and Daniel Schwartz supported by piano and string quintet made the work sound so clear. The unresolved harmonies, the delicate solos of the strings, the string codas ending Cease smiling, dear and the violin solo at the end of Pale Amber Sunlight sounded light and airy in this arrangement. The soloists’ voices bloomed in the resonant space until they were dwarfed by a choral fortissimo “they are not long the days of wine and roses” which finally resolved harmonically on the words “closes within a dream”.

Perhaps Ralph Vaughan Williams and Frederick Delius would have liked these chamber versions of their works.  In this swan song, the Delius Society of Philadelphia provided a rare opportunity to hear these formidable compositions.