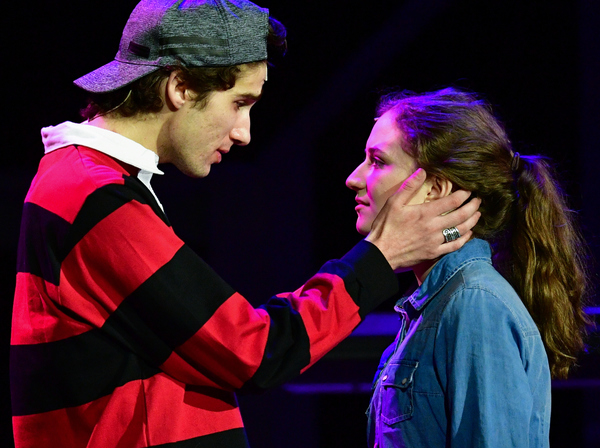 Krissy Fraelich’s riveting central performance blends with the perfection of Geoffrey Goldberg’s direction to make this production not only powerful and poignant. It might be the best ever in Media Theatre’s history, and that’s saying a lot considering some of the outstanding productions Media artistic director Jesse Cline has mounted in the past two decades.

The key to Goldberg’s NEXT TO NORMAL is normality. Goldberg and his cast don’t exaggerate or heighten anything. They play the emotion of a typical family facing a dilemma, so there are difficult and intense moments to face, but the overall quest of the characters played by Fraelich, Ben Dibble, Molly Sorenson, and Ronnie Keller are striving toward balance. The beauty of Fraelich’s remarkably moving performance is how everyday and struggling she can be as Diana, a woman who has been shocked into bi-polar behavior and other mental illness by the death of her infant son, while she gradually and knowingly slips her moorings from stability to another bout of delusion and lunacy.

It is Fraelich’s humanity, and our compassion for it, that drives this production. As opposed to playing a crazy lady milking her condition to the dramatic hilt, Fraelich is an average woman who yearns for responsibility but can’t get over the horrible trauma of her life and seeks it like any addict who gets comfort from his or her self-destruction. I’ve often said Krissy Fraelich does not have a dishonest bone in her body, on stage or off, and the sincerity to get well she shows as Diana, sabotaged by her unwillingness to give up, and therefore kill, the son he has nurtured to age 17 in fantasy, conflict in a heart-wrenching way the sympathetic Fraelich might be the only actress to pull off.

I praise so lavishly because I have seen NEXT TO NORMAL four previous times and have always found it problematic, even when productions were in control and resisted the temptation to be overwrought or give too much attention to the constant ringers and overkills book writer Brian Yorkey and composers Tom Kitt (music) and Yorkey (lyrics) foist on their work, and its audience. As with the current Broadway hit, “Dear Evan Hansen,” there are self-consciously dramatic bits I think are meant to artificially stir the emotional pot more than they move the plot forward. The trick ending of NEXT TO NORMAL especially upsets me.

The musical’s flaws don’t matter in this production because each member of the core family, including the imaginary Gabe, appeals in so many ways and performs so believably, your feel as if you are seeing a show about people, and not a show about a problem, and that makes all of the difference.

Everyone involved in this production, including Goldberg, deserves solid praise for keeping so much on an even keel while using the proper channel, the musical numbers, to explain themselves or let off the steam and pressure of having to try so hard for evasive normality while acting as calmly as they can muster.

Fraelich has a multitude of wonderful moments. Among the most touching is her rendition of “I Miss the Mountains,” Diana’s memory of a more carefree youth. Her most amazing moment comes near the beginning of the production. At this point, you don’t suspect anything is wrong with Diana. Even when you know the show, and therefore the mysteries to be revealed, you marvel at how steadily Fraelich’s Diana carries on. Then comes the simple act of making sandwiches for the family’s lunch, including a sandwich for the phantom Gabe, and Diana has a lapse. She goes suddenly berserk, flinging bread everywhere and recollecting it to pair slices for the sandwiches. In this production, the sequence is chilling. It not only informs you, it makes you sad.

Two young actors I spotted in earlier roles fulfill the prodigious promise in this production.

Molly Sorenson stood out in Jesse Cline’s production of “Thirteen” in the summer of 2016. As Natalie, the sister born after Gabe’s death, but who has been haunted by her mother’s visions of Gabe her entire life, matches Fraelich in sincerity and integrity. Sorenson is a multi-faceted performer giving a multi-faceted performance. You empathize and cry with Sorenson’s Natalie just as you revel in her strength, her resolve, and her initial seeming to nurse her own emotions while her mother favors her dead brother and her Dad has to look after Mom. Sorenson takes the audience through an entire tour of teen angst, mature and in charge one moment, beset with emotion and feeling of inadequacy or neglect the next. This is a sterling performance. One hopes many more follow.

the other “find” (Cline’s, not mine; I only noticed) is Ronnie Keller who stood out in the chorus of last year’s “Side Show” and had a marvelous cameo in this winter’s “Beauty and the Beast.”

Keller doesn’t need a song to tell you he’s alive. He is a vibrant performer who finds every shade of Gabe, from his mischievous way of getting his mother’s attention to his pretense at having the problems of a teenage boy, Keller is a superb dancer and rocks the stage with Gabe’s anthem, “I’m Alive,” which adding to the zest of ensemble pieces Goldberg crafts so well and so excitingly.

Ben Dibble unsurprisingly adds to the show’s call to make things all right and to its sincerity. He is every inch the dutiful husband and responsible father. Dibble’s Dan is a man who is committed to his family no matter how hard it becomes to remain so and no matter how tempted he may be to seek an easier path.

Wonderful supporting turns are turned in by Patrick Ludt, as a spate of psychiatrists ranging from run-of-the-mill to quack to helpful, and Christopher Infantino, who keeps the honesty going as Natalie’s out-of-the-blue boyfriend.

Ludt shows his leading man dance chops in ensemble numbers. Infantino adds spark to those numbers as well, but he earns more kudos for developing a complex character who has his own eccentricities but can key into Natalie’s need and be the boyfriend any girl would need in a trying situation.