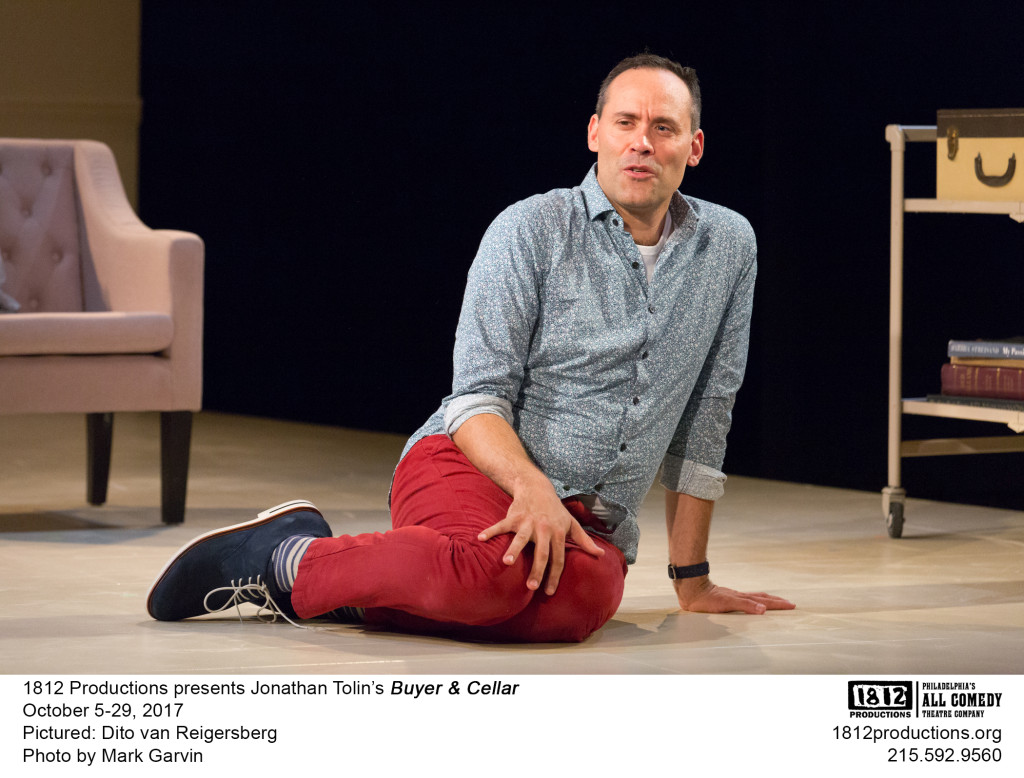 This is one of those truth-is-stranger-than-fiction moments. BUYER & CELLAR, the show opening 1812 Productions’ season of comedy, is about Barbra Streisand’s basement. In which there is a shopping mall. Even more surprising than the private mall is the fact that the show is less about the gay world’s obsession with Barbra (and Liza and Judy) than it is about the bizarre lifestyle of the extreme wealthy. The story is told by an out-of-work actor who takes the job as the seller in the cellar.

Said seller is Alex More, played by Dito van Reigersberg. This is a solo show so Dito plays not only Alex but Alex’s boyfriend Barry, Barbra herself,  James Brolin (Streisand’s husband), Sharon, the formidable Keeper of the Mall Gate, Bea Arthur (an excellent slow burn) and a bunch of other characters. Lots of this is funny (brush up on your Yiddish) and clever (brush up on your Streisand movies), but the characters feel less distinct one from another than they might be.

The show has a semi-serious agenda which seems to be a half-hearted indictment of conspicuous consumption; Streisand’s mall is full of stuff: dolls, frozen yogurt machines, elaborate costume shops, antiques, etc etc.—everything but customers.

And there is pathos here, as Streisand’s sad childhood leaks into her fabulously successful adulthood. Her life of absurd privilege is revealed in  tiny details, as, for example when Barbra tells Alex to take off his shoes for his tour of the house. “Just like at the airport,” he says. “What do you mean?” she asks. The final third of the overlong show turns a bit sappy, as Alex and Barbra seem—only seem–to become friends.

Written by Jonathan Tolins and directed by Dan O’Neil who needs to find more action than simply moving a chair and a cart from downstage to upstage, BUYER & CELLAR is a light, bright night out.

Worth noting: Streisand’s book, My Passion for Design which functions as an element in the show was originally selling at $500. When I checked on Amazon, it was down to $4.52. Is that the moral to the story?