Arielle Pina doesn’t have words for it. Yes, Pina can talk about colorism and she can talk about the larger structures of racism and white supremacy that frame her experiences of colorism. But there’s not a way to neatly explain how it has affected her and her way in the world.

Pina is a woman of color. So is her sister. So is her collaborator Shari Williams. There’s no resolution for Pina, and this is what’s loud in the rehearsal studio as Pina and Williams try to negotiate an ending to NO INTRODUCTION, which opens this weekend.

As a white person thinking about how to write about NO INTRODUCTION I asked Pina what she wanted to talk about, hoping I could make space for her and step back. Pina and Williams initially suggested they rapid fire interview each other. I liked the idea. But it didn’t work. They don’t have the words for it, thess feelings and sensations buried in the tangle of racism and skin tones and shades darker or lighter and beauty and femininity and sexism. And Pina didn’t have words for it when, as a little girl, a white grown up asked Pina and her sister, as they stood side by side: “Which of you is the pretty one?”

When Pina first tells me this story I clock my sense of shock, the “No way!” insistence, from my white-lived life. My surprise suggests that this kind of thing is abnormal, an anomaly. And of course, it’s not. I have a not-very-useful reaction to search back and think about the times my physical features as a young girl were hurtfully classified by adults around me. (Often.) So my Whiteness is going to sort of eclipse Pina and the work here, which is problematic. My aim is that by charting through my reaction, by being transparent about myself, I can be useful to other white audiences also trying to do a better job.

I had a playmate who lived next door who was bigger than me and struggled with both body image and her identity as an adopted child. Her father, almost every time he saw us side by side, told me I looked pretty, that I was beautiful, the “Lily, how did you get so pretty?” sort of playing dumb-ness of adults being poisonous, often without understanding the fucked up values they are embedding. As a kid, I didn’t know how to explain, to myself or others, why this made me feel bad. But my body knew that shit was fucked up, and I felt physically icky.  But I did not have the words. 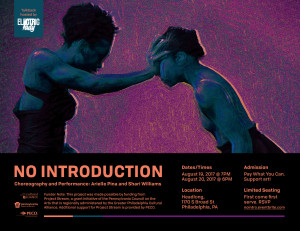 So yes, I flashed back through all of my own shit. AND, I have to be like: No Lily. This is not a ME TOO moment. Pina walks this world a black woman and I a white woman. Yes, yes I still have the “but I’m Jewish!” and the “but I’m queer!” yips and yelps. Those voices are my ego; those voices are the blindness and erasure of “inclusivity” and “equality” (rather than equity) that cancel the particular experience of the black person I should be listening to, and erases, in an act of defensive comparison, the unparalleled violence of anti-black racism in America. So, no Lily, this is NOT a “me too” moment.

Pina shares with me that just this year, a white co-worker saw her and her sister side by side and posed the exact same question: “So who is the pretty one?”  She shares with me that a lovely, compassionate, white tour mate had never heard of colorism. Because a lovely, compassionate white person can walk around America not thinking about — not even aware of — shades of blackness, and what they mean, from moment to moment. That’s the system of Racism we live in.

In case you haven’t registered: Let’s say hypothetically Arielle and her sister wanted to actually answer the toxic question “Who is prettier?” In the United States, founded on and still operating on a color caste system, the answer to the question “who is prettier?” is: the light skinned sister. In this case, Pina. Yes, it feels fucked up to type that.

When Pina is dredging up this memory of childhood and last year and also day to day life, her mouth twists and one eye closes, and she starts to talk in larger cultural abstractions, lifting the ideas off of the bodies of her and her sister, in favor of a general discussion, where words are available . She says, “Now as an adult, I understand that whiter skin is considered more valuable.”

She tells me briefly about colorism in beauty in the black community. We talk about the perverse obsession with the “Redbone” woman in Hip Hop, especially in the 90s. So, yes, colorism, as a technology of racism, is carried in the bodies of people of color, just as I carry patriarchal tools of binary gender roles and sexism in my body (complimenting a little girl on her outfit but not a little boy, covering up more and lowering my voice when i have to deal with heteronormative cis men). And, as in the case of other ‘isms,’ the oppressive values can live like a parasite inside the black community, alongside values that reject the larger systems. If you need more help with understanding the special place of Anti-Black Racism in America, search the internet, or go to the library. It’s hard for me to get into all that here. Suffice to say, Anti-black Racism is a particular creature, distinct from sexism or heteronormativism, it works similarly, but it’s different.

I haven’t seen the finished version of NO INTRODUCTION. As of today, the ending is not sorted out. How could it be? This shit is still present, exhausting, in Pina and Williams lives. Pina says she keeps working on it because it “feels useful right now and feels like it’s killing me at the same time.” Ugh, wtf, I mean, the way in which explaining and dismantling racism continues to fall to people of color: fuuuuuck. Me? I’m trying to stop asking for permission or asking to be educated. I’m trying to make some internet space for the unresolved-ness of ”NO INTRODUCTION, for Arielle and Shari’s exhaustion, and also for their soft power, their friendship.

I saw Pina’s other evening work “Unarmed” in the Philadelphia Fringe when I first moved to Philadelphia in 2015. I remember it made me feel a self-aware kind of un-resolution. It didn’t tell me what to think or what to do or what to feel, it surrounded me with complexity and non-answers. Oh my god yes, of course, as a white person, trying to be an ally, I would love an ANSWER, a clear action plan, a resolution. Wouldn’t I love to go to a show about colorism and leave being like: “OKAY GOT IT COOL THANKS I’LL GO FIX IT NOW.”  But that’s actually my white experience talking, the idea that I’m entitled to an answer, to an ending, to a solution. No, I need to spend more time being with the question, the problem, the hurt, the grief, the non-words, the discomfort, the bodies and the beings and their force.

NO INTRODUCTION opens this weekend: