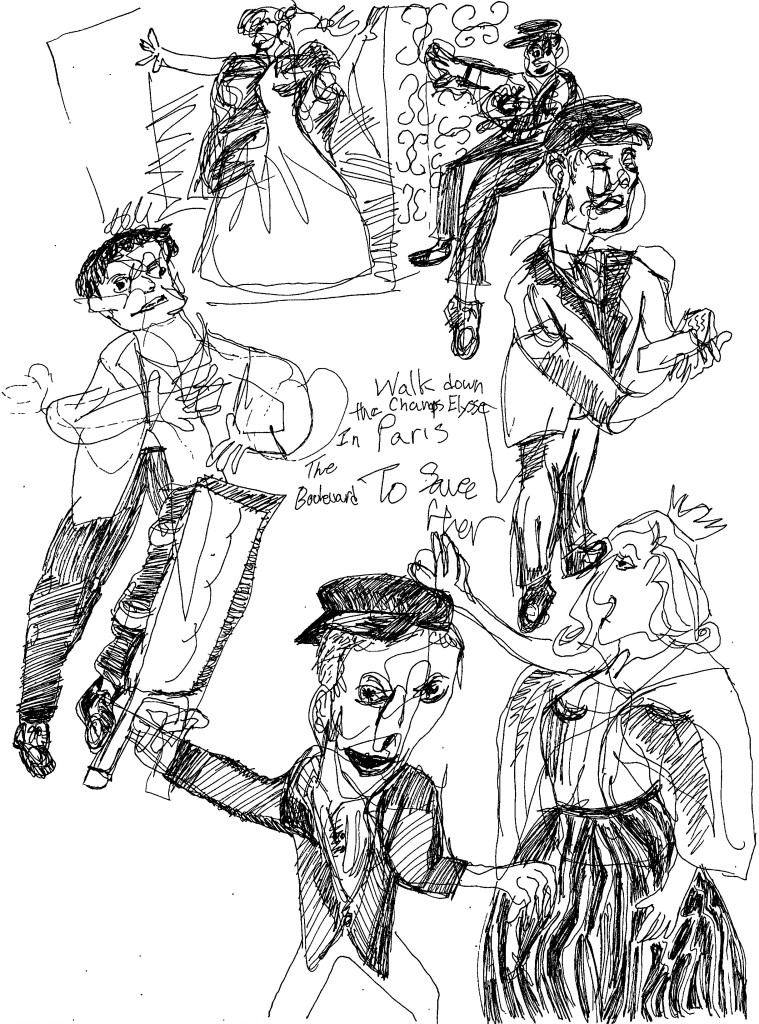 The small cast at Curio Theatre play multiple roles in THE MASSIVE TRAGEDY OF MADAME BOVARY, a dramatization of Gustave Flaubert’s novel (read the Phindie review). Aetna Gallagher, Andrew Blasenak, Chase Byrd, and Doug Greene begin the narrative at the end of the story. They question the plot during the middle of the play. The director, John Bellomo asks the question, “what is Madame Bovary about.” The moral of the story is a comedy and a tragedy thoroughly intertwined and to the point that realism is represented by the rats. The liars and disreputable characters in Madame Bovary come from a societal norm, but in this loose adaptation the rats are the problem. 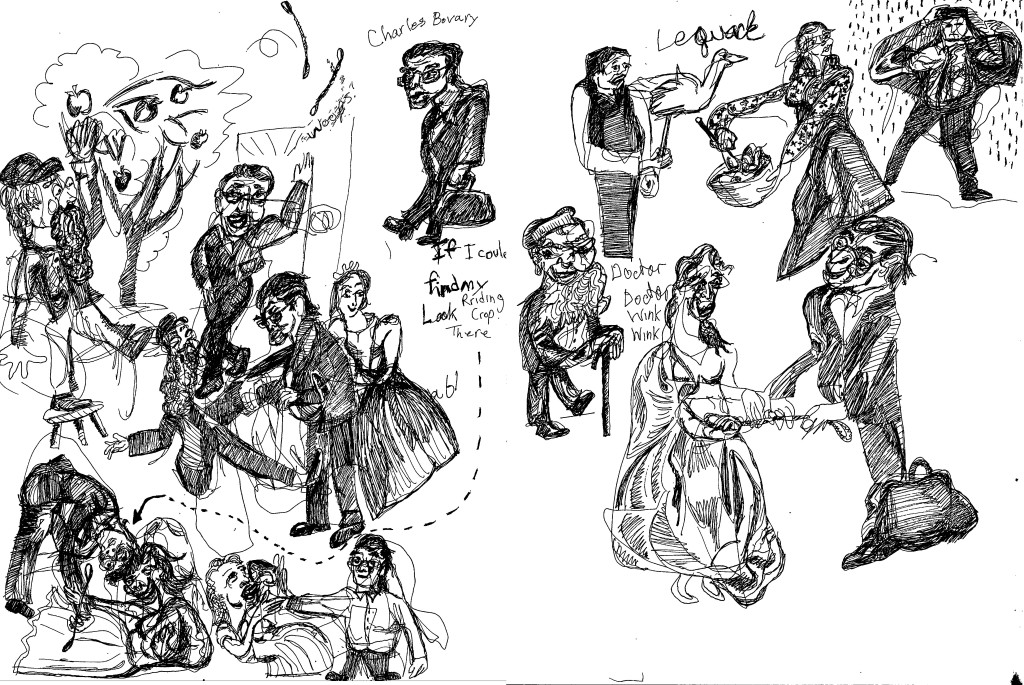 Blasenak and Byrd circle the stage as the exterminators. The horse carriage is represented by a cut out of a horse head. They introduce the main ingredient of the plot which is arsenic. This is the end of the story after Madame Bovary has made a reputation of sleeping around and over staying her welcome in a French city called Rouen. The business of exterminating the pests at the Golden Lion Inn intersects with the climax of the story. The emotion comes from the script and from the actors’ own voices. Byrd stops the play to point out the rat infestation which becomes the meaning of this adaptation. This framing device is not too far off from Flaubert’s satire on the bourgeoisie. The interaction between the actors is amusing, and one sees an interpretation of Madame Bovary that interjects the moral of the story. It is another take on the influence of the politics during the French Revolution. When it really rains on stage we feel pity for the proletariat Charles Bovary, played by Blasenak. 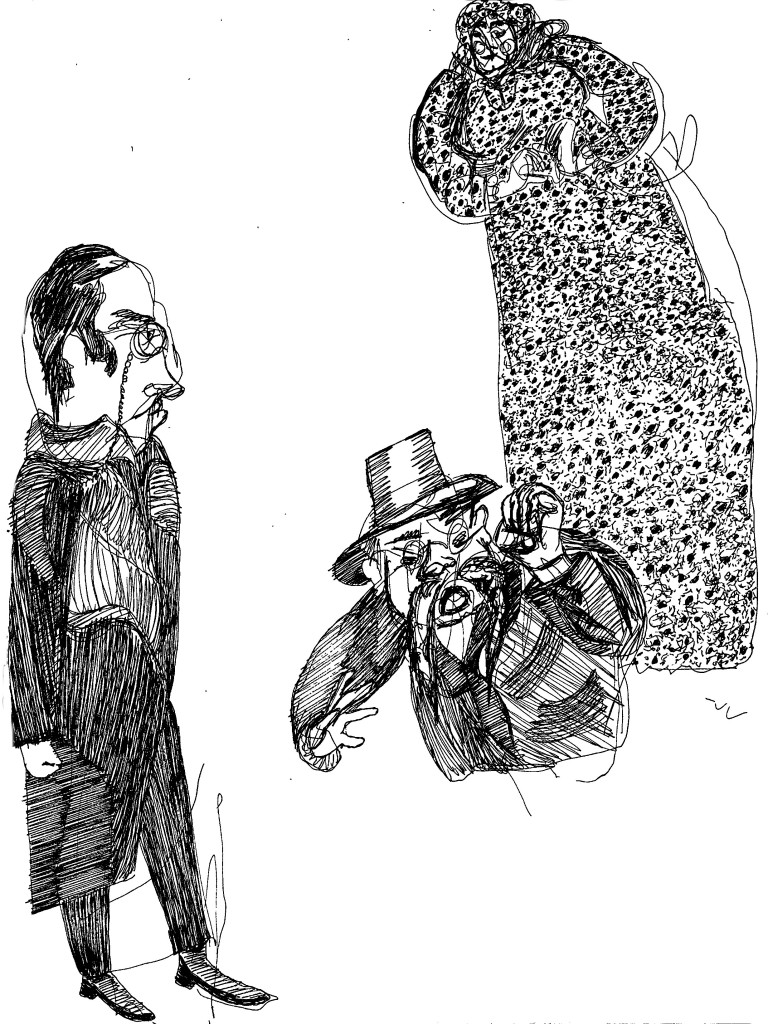 The bourgeoisie lifestyle of the French Monarchs during the late 1800’s influenced Flaubert to describe this comedic tragedy of the French Revolution. This comical group of actors show the power shift from the Monarchy to a proletarian rule. We are delving into realism by adapting the characters from the novel, and we then become witnesses to the attitudes emphasizing a relationship between our world and the fictional world. The discussion of the play in terms of sex and woman’s studies leads to a modern interpretation of the Victorian time. There is indecision between comedy and tragedy, and the rat infestation either plays the part of the proletarians or the bourgeoisie in history. It is my opinion that the bourgeoisie who paid a large sum of money to get rid of the rats is also killing Madame Bovary.

In one scene, Greene plays Homais the owner of the Pharmacy in Yoneville, and Gallagher is possibly playing the owner, Madame Lefrancois, of the Golden Lion Inn. In the middle of them is a rat catcher, played by Byrd. The poisonous agent in the narrative is handled by the traveling vermin executives and the nobility. This relates to the bourgeoisie taking control over the proletarians. In this loose adaptation of Madame Bovary the tragedy is the rat infestation, but the comedy is the extermination of a pest. The North American premiere of The Massive Tragedy of Madame Bovary is a comedic tragedy about a rat problem. Madame Bovary eats arsenic meant for the rats and I wonder who, the proletarian or the bourgeoisie, are represented by the rats.