A play with gorgeous graphics for its marketing just looks like it has its shit together. I’m self-producing PARROT TALK, a play that I wrote. I’ll never be Sam Tower, who is surely one of the best promoters in the business, but I wanted something special for our graphics. My own graphic sensibilities are pretty primitive, so I had to go elsewhere. Margaret Kearney is an incredibly thoughtful and talented artist, designer, and teacher. She brings to this project the sensibility of a fiber artist and weaver of materials and ideas—and zero experience in graphic design for plays.

To plan out the design process, I borrowed the system Shari Hersh, my manager at Mural Arts Philadelphia, has taught me for our work there: a set of concept (potential directions / identities), followed by a series of working drafts which narrow down possibilities, and, finally, one or two detailed drafts to finalize and finesse.

After agreeing to take on the task, Margaret sat down with me, and we:
A) discussed the play, particularly the various characters and the way in which it chops up and mixes up language;
B) looked at images of some of the performers (in case she wanted to include them in the eventual product); and
C) looked at some previous theater marketing images we thought were successful.

I sent her an email afterward that includes some goodies, including some posters from other plays (1, 2, 3, 4), the parrot image below, imagery of the actors, and an evocative description of the play. 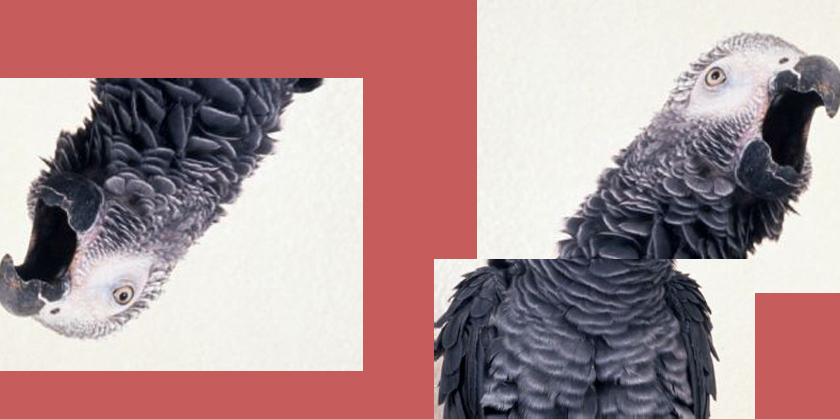 So after taking a weekend to consider the piece, she sent a few concepts, representing four different visual directions, with these notes. 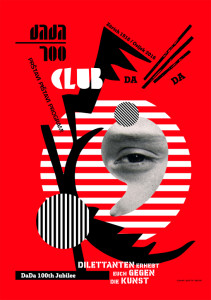 1. Inspired by Dada posters: simple red/black color, chopped up text featuring “Parrot Talk” larger than the rest, Could include a silhouette of a figure or cropped inset including a person in some way

2. Referencing tarot – I’ve included some images of traditional tarot designs, the idea being to create a new card (or cards?) – could include “The Parrot” or “The Mind Snake”. This is not directly choppy in the way we’d discussed, but I think has potential to be a fun reference to loops of time/wisdom

3. Chopped up adds – have you seen these bags that are made of woven bits of trash (cheeto bags, etc)? I think it could be a cool reference to the chopped up bits of commercial text in the play. This could take many forms- could be directly taken from images of these bags, or used as an inspiration for how to chop up different bits of advertisement or just typed word (for instance, this could all be flat black and white, not even photographic, just in this format of interwoven image – I made an example that just says “Hello Parrot” a bunch… This could be cool done with lots of color also, but it seems like your tastes are tending towards limited color, right? ​

With texture described above (“Hello Parrot”), could be gathered into the form of a person or animal – seems like many of the examples we’ve looked at have sort of a central epic (dare i say mythic) figure. Instead of chopping up an image, could use a choppy texture to create this central image.

4. Could be cool to do something with imagery from digital display/distortion. Obviously trying to avoid being too passe glitchart-y.

I asked a few people (including Phindie editor Chris Munden) for feedback. I ended up picking up the one we both thought was most interesting, a weaving together of words based on fiber arts practice. Then she sent versions of her first draft: 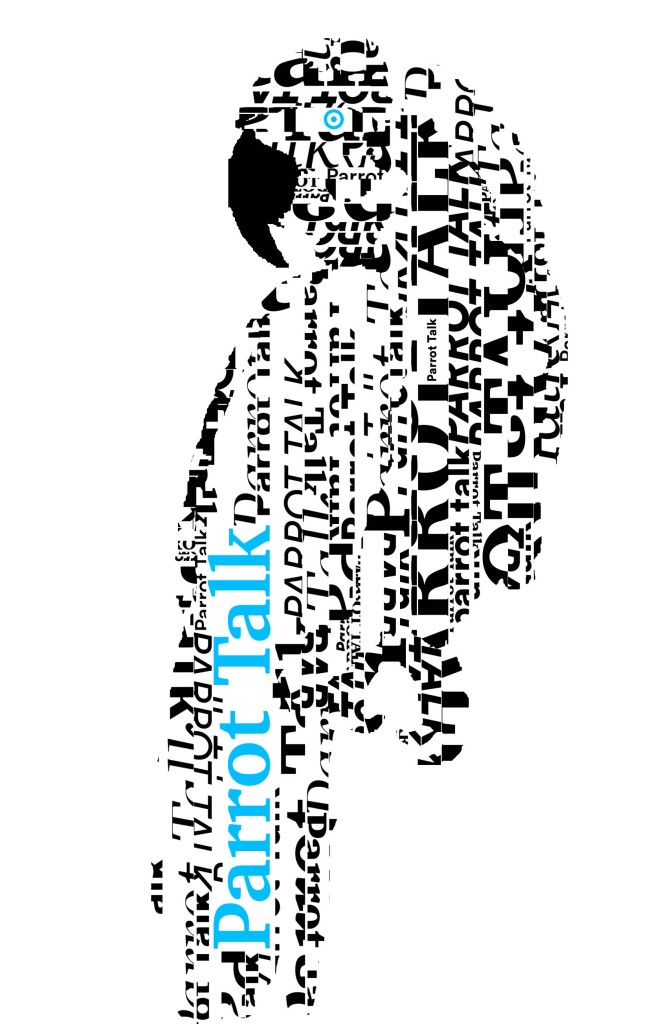 Then I showed the draft ideas to a few people, including the director Jack and actor/longtime collaborator Hallie, and gave a few suggested edits. I really thought she was going to come back to me with a finessed version of the first draft, but she once again went out on a (really successful) limb and gave something new, with these notes:

I’ve refined the texture a bit and am playing with using multiple parrots to achieve the different formats. What do you think about the multiple parrots? Do you think their stance is getting across the mood of the play (I worry they may be too solumn?) 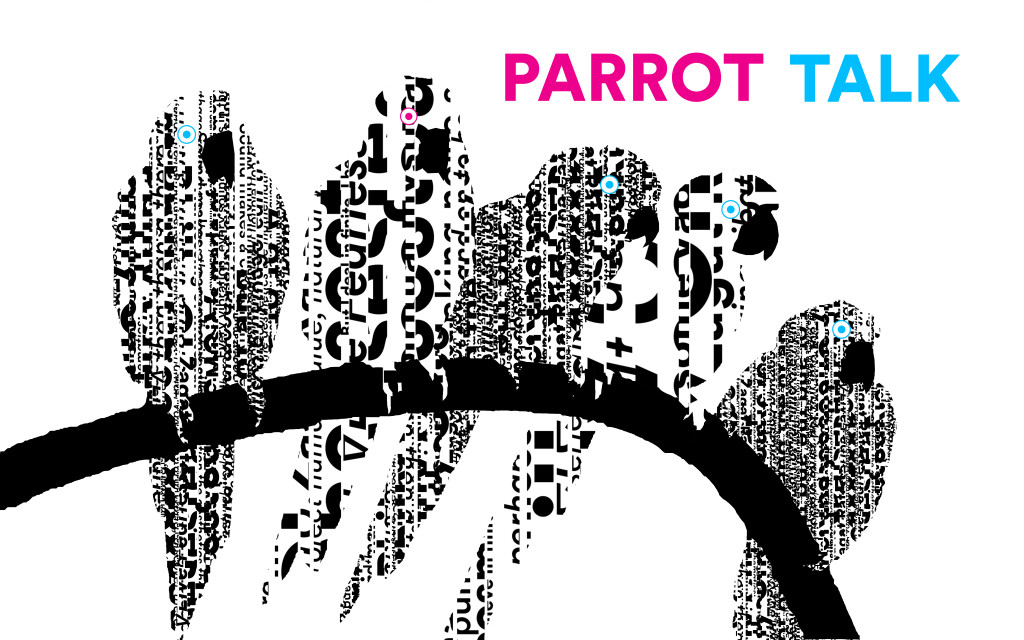 The multiple parrots and the varying textures come across less as a logo and more as a depiction of the show—combined with the stances it felt more alive than the last iteration. The solemnity is bit cut by her playful eyes, which give it a creepy vibe I really enjoyed.

Okay, so I changed the colors up a bit to reference the photo you sent, and added a layer of texture which I think brings it into that grainy vintagey vibe a bit more. I’ve kept the dual tone text just because I think it gives it a poppy punchiness that feels appropriate.

And ahead of schedule, she sent this version (and some different formats), that is basically our finished design. It’s iconic, it’s accessible, it’s weird, and it’s been really flexible across multiple formats (print, social, email, etc.). It’s also got some negative space where I can add additional text for marketing purposes! 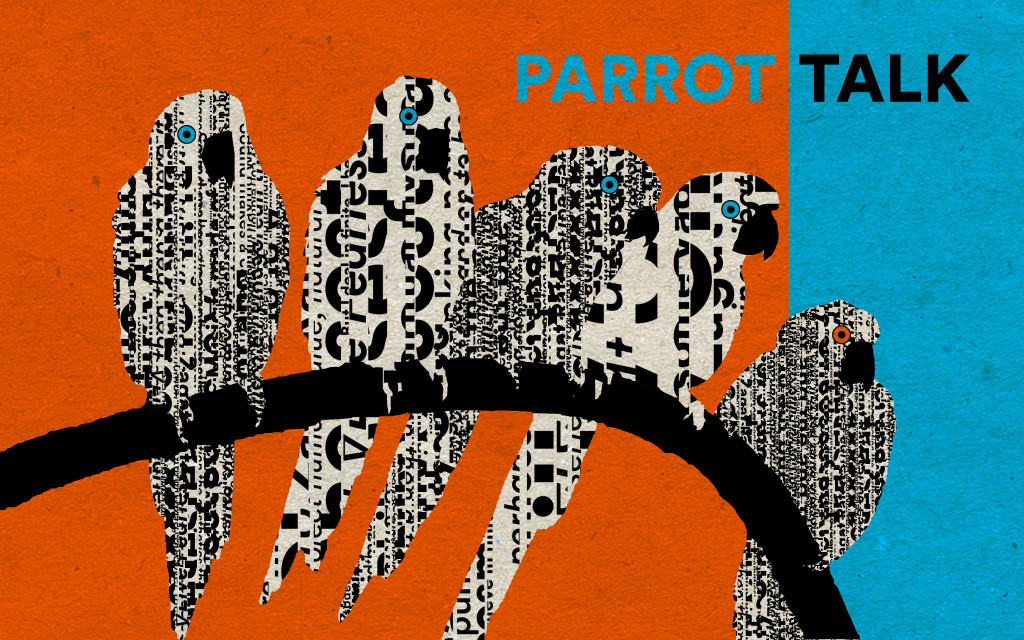