“It’s easier to fix than to create,” says director and adapter Matt Tallman of Anthony Hope’s THE PRISONER OF ZENDA running March 30 to April 30 at the historic Hedgerow Theatre near Media, Pa. This swashbuckling, romantic melodrama from the early 1900s takes audiences through a zany and adventurous world of Ruritania, a house of cards full of political intrigue and dueling heroes.

“When Jared [Reed] first talked to me about it, he talked about an adaptation in the vein of The 39 Steps or Bullshot Crummond, which are big stories featuring small casts creating spectacle through theatrical ingenuity, it appealed to me,” Tallman continued, “when I actually read Anthony Hope’s novel, I was struck by the emotional journey undertaken by our hero, Rudolf Rassendyll.”

In Hope’s adventure novel, the King of Ruritania is drugged on the eve of his coronation. In order for the King to retain the crown his coronation must proceed. Fortuitously, an English gentleman on holiday resembles the monarch and is persuaded to act as his political decoy in an effort to save the unstable court.

Like 39 and Bullshot,Zenda pulls much of its comedy from the simple fact that so few actors play so many parts. Actors Mark Swift, Josh Portera, and Allison Bloechl will do much of the comedic lifting in this show, however, Tallman knew he could find laughs in the structure of fitting an entire kingdom into five actors. Fortunately Hope’s novel provided the depth and fleshed out characters necessary to tell an adventurous melodrama, and it was clear to Tallman from the beginning that the source material could do the “heavy lifting” on its own. 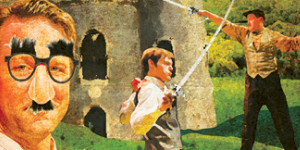 “Yes, it is a swashbuckling romance,” says Tallman. “There’s comedy, there’s fun, there’s memorable characters, but I was sold by the deeper human story that ran through the show.”

Emotions are essential to melodrama. The nature of the piece is a sensational dramatic story with exaggerated characters and exciting events intended to appeal to the emotions of the audience. Bullshot Crummond plays on the antics of early spy novels. The 39 Steps satirizes heavily the film noir of the 1920s. Zenda, in its current form,is an homage to the days of Errol Flynn’s Robin Hood and Captain Blood.

“I knew I had a limited number of actors, that the majority of them would be Hedgerow company members. and I knew Hedgerow’s physical space from having acted there in 39 Steps and directing Bullshot, so those things certainly influenced my writing,” said Tallman.

The challenge that interested Tallman was the approach to the material. Given the nature of the play, the madcap style of Monty Python and the wit of Mel Brooks, finding a balance between fairly broad comedy and sticking the emotional landing is what drew Tallman into the quest.

As for Tallman’s writing, he stuck to good ole fashioned trial and error as it “gives him permission to get down a draft that isn’t perfect.” Initially sticking close to Hope’s writing style, throughout the creative process Tallman found himself adjusting and playing with Hope’s structure in order to find a perfect balance of emotion and drama.

“My real entry point was when I thought of how I wanted to do the ending. The very end of the novel as written had tremendous emotional impact on me, but wasn’t theatrical in a way that felt satisfying to me. But, before I sat down to write, I had an idea of creating a different ending that hopefully mirrors the effect the book has on me, and I hope will be impactful for audiences,” said Tallman.

Throughout the process Tallman found himself reaching back to the “depth” of the story. The book has humor, romance, adventure, and a human story that has the potential to be very moving.

“At the end of the day, having an emotional impact was key for me, “ said Tallman, “Zenda is different from other plays in its genre by virtue of the depth of the emotional life in it, which was inherent in the source material. When we did a table read of my third draft and Jared Reed, Hedgerow’s Producing Artistic Director, was in tears at the end, I thought that was a good sign.”

Adult ticket prices are $34, with a $3 discount for seniors. Tickets for those 30 and under, as well as students, are $20. For groups of 10 or more, tickets are $18. Prices include all fees and are subject to change. For reservations or more info, call 610-565-4211 or visit hedgerowtheatre.org.