Phindie fully supports the work done at PlayPenn, one of America’s much talked about development centers for up and coming playwrights and their new dramas. Each summer, PlayPenn provides opportunities for six interns to spend three weeks with some of the most promising North American playwrights who come to Philadelphia for the concentrated writing and re-writing conference.

In the third part of this this three-part interview (see parts one and two), we learn about the professional and creative experiences of three students since they completed their work at PlayPenn: Anita Castillo-Halvorssen, Jillian (Jilly) Schwab, and Patrick Ross (bios at footer). For information on how to apply for an internship, which has launched the careers of quite a few young theater people, visit playpenn.org. Application deadline for this year’s conference is April 1, 2017. 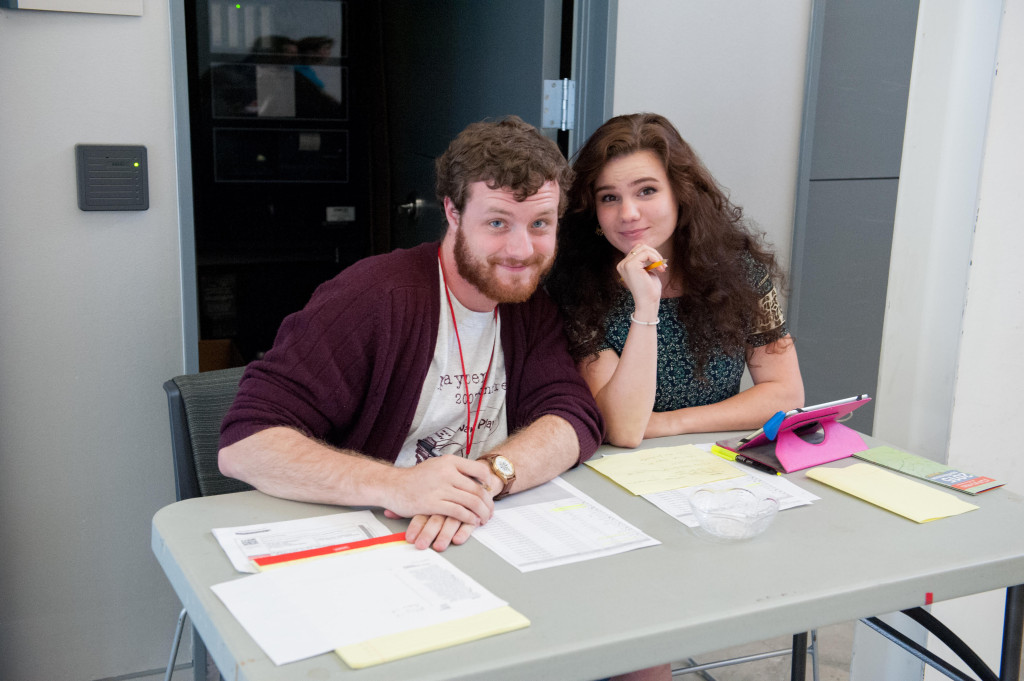 Henrik Eger: Now that you have completed the PlayPenn internship, how do you see yourself as a young professional?

Anita Castillo-Halvorssen: I feared that if I asked for opportunities to hone my skills in the arts, I would fail in some way, and let down those who had trusted me to accomplish what I had set out to do. Now I am confident that being a young professional is about ignoring those fears, putting myself openly at risk for failure, and having faith in myself—enough to know that I will ask for help when I need it, and that maybe I know more than I think I do.

Patrick Ross: I’ve expanded my ideas about what I’m willing to do for work. Before PlayPenn, I wanted jobs that would support writing, but now I’ve realized that I’d much rather be working in the theater: acting, assistant directing, stage managing, and house managing—whatever it may be. I simply want to be around the people that make art. They are the best.

Henrik: Has your experience strengthened your desire to work in theater-related fields, or did it have the opposite effect? Put another way, what are the next steps you want to take in your career? Tell us more about your new resolve.

Patrick: I spent the month of June, between my graduation from Swarthmore and the PlayPenn internship, sort of languishing in adulthood. The PlayPenn internship demonstrated to me that being a professional theatre artist is not only a possible option in Philadelphia, but a very viable one. Elaina Di Monaco was a PlayPenn intern a few years ago, and now she’s back at the conference as a dramaturg. Seeing young professionals like her, who are not so much older than me, really galvanized me to embrace this lifestyle.

Before PlayPenn, I was looking for boring, full-time office jobs—something to support my writing, which I do alone, because I don’t really have the resources for a theatre career. I’ve realized now that I do have those resources: I have friends and ideas, and that’s all it takes. It was wonderful to figure that out.

Anita: My next steps are to travel and be in greater contact with artists around the country and the globe, so that I can start to get a feel for many unique theater communities. I have resolved that I want to be telling, and helping others, tell new stories—stories that we don’t otherwise have a chance to hear. If I do that through dramaturgy, theater direction, film production, or even acting, I will be happy.

Henrik: As a PlayPenn intern, how has your participation in this intensive workshop series changed the way you might handle challenging situations differently in the future?

Patrick: I’m a writer, so I’m used to rejection. I’ve probably been rejected thousands of times by employers, editors, women . . . I’ve got thick skin, which is a blessing. I think it’s because I grew up a disciple of J.K. Rowling, like so many writers of my generation. We grew up believing that perseverance will prevail, and that rejection is merely an interim state. I suppose it was refreshing to see brilliant artists’ ideas be rejected as well—it was a useful reminder that it’s rarely personal.

Anita: I am constantly learning how not to take criticism personally. I watched these playwrights bravely bare not only their imagined worlds, but also their personal experiences in front of all of us – welcoming our feedback.

Jilly Schwab: Self-doubt and I are very good friends now. It’s always going to follow me, but I’m finding better methods of channeling it. The same goes for handling rejection. I keep expectations low, and am receptive to change.

Henrik: When you look back at your life as an evolving professional, where do you see yourself now in this process of becoming an even stronger person in the academic and/or work world than before?

Anita: Because of PlayPenn, I am now beginning to understand that to do what I want not only requires skill and vision, but also trust.

Patrick: At the end of the conference, [director] Tyne Rafaeli sat me down and gave me a pep talk. She gave me some of the best advice I’ve gotten. If you want to live in the UK, she said, go now, and spend your twenties there. Work in a bar. Read everything you can. Write everything you can. And see all the £5 theater you can.

And that sparked a new line of thinking for me. Why get an MFA in Playwriting when I’m already a playwright? Go for an MA in Medieval Literature or something—or skip grad school entirely—and learn about something else, anything else—then write plays about it.

Henrik: What advice do you have for the next generation of interns on how to strengthen their skills and grow in the process as members of a professional team with fellow interns, writers, dramaturgs, directors, actors, other theatre artists—and audience members who could be writers, board members, donors, etc.?

Patrick: Talk to everyone, not just your team. Connect with the other playwrights and directors and actors as much as possible. Oh, and don’t bother Paul.

Anita: Learn everyone’s names. I almost wish I had taken time out to study all the names I came across—even, or perhaps, especially the donors’. It feels good to be remembered.

Jilly: Get yourself out of that office and talk to folks! Probe some minds, pick some brains. It’s a diverse pool of people coming together for the thrill of new work, so you already have something in common. Keep in touch with the people you meet and get to know what they’re working on. Also, being an intern does not mean you are insignificant.

Henrik: Given your wide-ranging experience during the intensive workshop sessions, which aspect of the theater world interested you the most, especially in terms of your own professional development?

Patrick: I was very interested in Lucie Tiberghien, who directed White. She directs mostly new work, which is a path I had never properly considered. How fulfilling it must be to go from project to project, and to collaborate with a living playwright every time? I am a Shakespeare devotee, but this internship did make me reconsider, at least to some extent, the value of producing him.

During one of our company conversations, David Jacobi said something that really resonated with me: “Playwrights are the only professionals in the world who lose jobs to dead people.” I think he’s really onto something there. Every time I advocate for a production of Macbeth, am I putting myself out of a job? Do I really want theaters to outsource my product to the deceased?

Anita: I have interest in being a new play dramaturg because of the burden I can lift from the playwrights’ shoulders when I provide them with context that might otherwise have bogged them down, while additionally assisting them in tightening and strengthening the narrative.

Henrik: How do you see your personal development, not as a student or an intern, but as a human being? Overall, what have you learned about yourself as a mensch?

Patrick: PlayPenn offers the interns a truly incredible opportunity by hosting a reading of our ten-minute plays, performed by the professional actors already at the conference. We weren’t given much time to write these plays, either, which meant that I was writing from the gut, not the brain. My previous work had been pretty heady—usually history plays, with intellectualist concepts. I didn’t have time to concoct a concept for this play, so I wrote something ridiculous in a few hours—and I think it landed. At least, three people told me it did, and you remember what I said about threes . . . It was great to realize that my voice is more complex than I thought, and I’m going to explore the comedy route a bit more.

Jilly: In younger years of my mensch-hood, I was frequently trying to step out and examine myself as objectively as I could. It turned out to be a bad habit. If I viewed my accomplishments and my creative development from any angle other than my subjective experience, it would be a cloudy sight, but now, I like the messy parts of myself that haphazardly put together my identity.

Henrik: I greatly appreciate your responses. Thank you, one and all. May your reports encourage other students and graduates to apply for upcoming internships at PlayPenn. Contact me when your own plays get performed on stages in Philadelphia, all over the US, and perhaps even overseas—one day soon.

Anita Castillo-Halvorssen: Graduate of Swarthmore College, BA in Film & Media Studies and Theater. Since working with PlayPenn, I enjoyed life in Colorado while assisting Landlocked Films with documentary projects and LOCAL Theater Company (“Fiercely committed to new American stories”) with a new production. I am currently a graduate student at Brown University, where I am pursuing an MFA at Trinity Repertory Company’s acting conservatory.

Patrick Ross: I graduated from Swarthmore College in 2015. My BA was in Theater and English Literature, with Honors (Phi Beta Kappa). I have worked in Philadelphia at Christ Church Neighborhood House and Lantern Theater Company. Currently, I am the Writing and Research Specialist at The Wilma Theater. During the presidential election, I wrote a weekly history-play-in-progress called Hillary the First. My play Scarlet Letters appeared in the Edinburgh Festival Fringe and the Philadelphia Fringe Festival, where it was named a DCMetroTheaterArts 2016 Fall Favorite.

Read the other two group interviews with the PlayPenn interns: