Born in Princeton in 1898, Paul Robeson,was raised by his father, a former slave and pastor. His achievements, along with his eloquent political discourse on the state of racism in America and across the world, make him a fascinating and inspiring study. In his touring one-night show I GO ON SINGING, Anthony Brown gives a heartfelt performance about one of Philadelphia’s most distinguished citizens.

I GO ON SINGING is thoughtful and informative, but can feel like an evening in church.  Brown’s heavy vibrato is of the old school and it sometimes obscures the tonality and texture of his lovely voice. His warm baritone has chromatic depth, while his sweeter high notes have delicate intensity. He gets the audience singing right from the start with “Wade in the Water”.  People drenched in butterscotch smells, happily singing along to church hymns feels beautifully inclusive, but not radically reflective of the man who was blacklisted by the McCarthy regime. 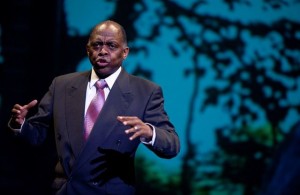 Images of Robeson flash on a screen, and an uncredited woman reads a narrative about the legend. Robeson’s rise to to stardom seems to transcend the adversity he faced as one of the few black leading men in Hollywood.

His time in London was a series of critical successes, and he went on to discover his African ancestral roots in Nigeria and other African nations.  When he returns to America as an international star, he is labelled a communist and his passport is revoked. This activist hero championed civil rights, and was denied his right to sing, the most powerful and natural of his abilities, and this was a man who loved and dedicated his life to America: the nation that enslaved his father and revoked his rights as a citizen.

The straightforward tale highlights Robeson’s struggles and achievements, yet is unable to dive deep into the inner passion of the man. As we fly through his life story, the songs throughout give us some connection to these feelings of quiet strength, but mostly they reveal to the audience a surprising connection to each other. There are still some songs that everybody knows and can sing together. And so, Robeson’s ability to connect to people of all ages and races through song continues even after his death: a fitting legacy for a truly great man.

One Reply to “I GO ON SINGING (Annenberg Center Live): Sing on”