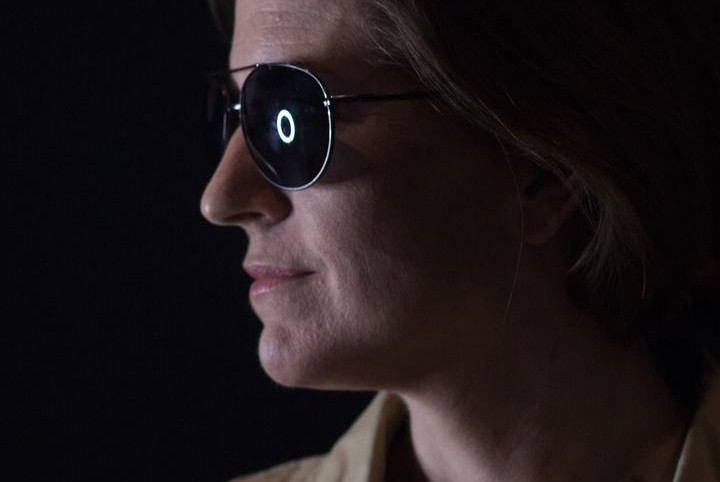 From hand-to-hand combat to intercontinental missiles, warfare seems to get less personal. But in George Brant’s GROUNDED, now in production by InterAct Theatre Company, greater distance between parties can make the violence no less traumatic.

Kittson O’Neill gives an assured portrayal of a cocky F-16 pilot intoxicated by “the blue” of the sky, an expanse well-evoked by Nick Embree’s Buckminster Fuller–esque geometric set and Masha Tsimring’s chromatic lighting (which combine equally well to summon a desert sunrise and an oppressive grey-out). Forced to stop flying when she has a child, The Pilot gets transferred to the “chairforce”. She’s confined to an office trailer in the Nevada desert, controlling a drone bomber thousands of miles away. Staring at a monitor in twelve hour shifts, she becomes haunted by the killing she unleashes over the grey video.

Echoes of George Orwell’s Big Brother run through GROUNDED. The Pilot comes to see herself as a godlike Olympus, an “eye in the sky” laying judgement on a distant land; her husband works at a casino, watched every moment by CCTV. (Neither the Pilot’s husband nor their child are given sufficiently enlivening detail of personality in Brant’s writerly script, which robs the later scenes of some potential emotional heft.) But the play also focuses on a less-considered aspect of Orwell’s 1984—the stultifying unnaturalness of an office job.

The Pilot celebrates life as an airforce pilot; killing “military-aged men” or civilian bystanders doesn’t weigh on her in that context. But faced with day after day of an hourlong commute, gazing at a monitor then making the awkward transition to family life, and her psyche disintegrates. Seeing the death she causes in using a computer joystick becomes unbearable, and director Kathryn Macmillan and her creative team provide an impressionistic backdrop for O’Neill’s controlled emotional descent.

More realistic quotidian details may have heightened the emotional journey of Brant’s play. But intentionally or not, GROUNDED is a tale for our times: war is most hellish when it resembles office life, reality is most profound rendered in pixels.