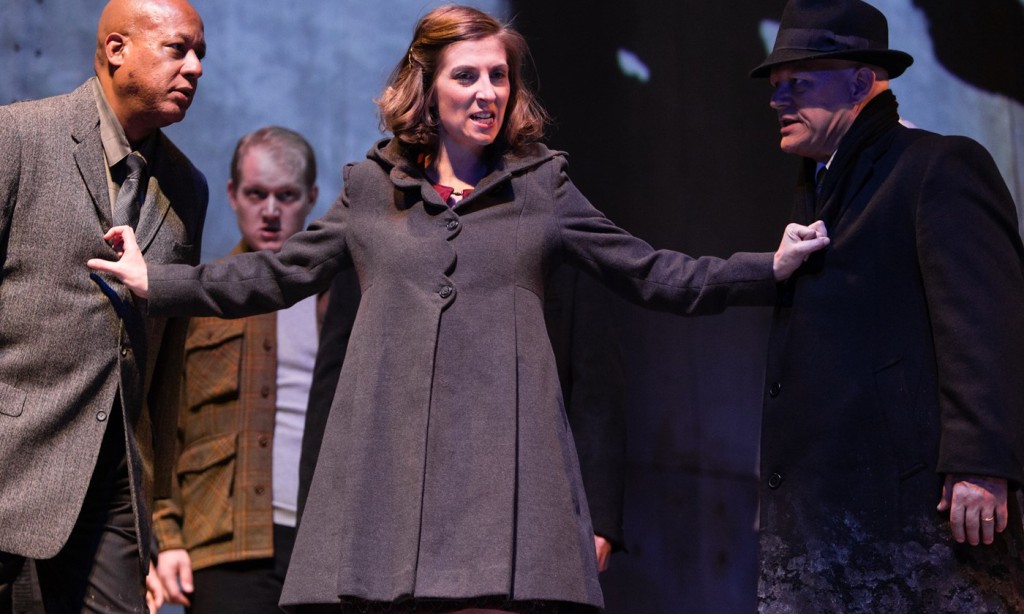 Bess McNeill’s north Scottish town is strict and pinched. It looks askance at undevout foreigners and continues to refer to Bess as McNeill after her marriage to Norwegian Jan Nyman, who is skeptical about religion and earns the undisguised disapproval of Bess’s neighbors.

Life on Skye is difficult for women. The men are absent for a long time at work on ships or oil rigs. Bess (Kiera Duffy) is not accepted as full member of the über-pious congregation and is told, upon marriage, she is the property of her husband and must obey everything he says to the letter. Even when the church elders hate him. To give an example of just how unforgiving these elders can be, BREAKING THE WAVES, a world premiere opera by Missy Mazzoli and Royce Vavrek based on the groundbreaking 1996 Lars von Trier film, shows them declaring a couple of deceased parishioners as “sinners” and sternly consigning their departed souls to hell.

Bess is already an object of the elders’ suspicion. She was hospitalized for a nervous breakdown when her brother was killed and is on medication to control her moods. Bess discovers real love when she meets Jan on one of his leaves from the rig that sits in the Irish Sea. We meet her as she expressing this love. Kiera Duffy plays her with a pure lyrical voice that ranges from soprano heights to appropriately eerie tones that seem to pass contralto into tenor.

Full display of emotion will be an occasional but ongoing concern in James Darrah’s production of BREAKING THE WAVES for Opera Philadelphia. There are times when Mazzoli’s music swells or becomes warningly ominous, but the feelings on stage stay neuter or by the book. I call this opera-itis, letting text, situation, or music substitute for full dramatic verity in a scene or moment.

In spite of a marvelous performance from Duffy, and truly great work by John Moore as Jan and the brilliant Eve Gigliotti as Bess’s sister-in-law, Dodo, the story often does the work you’d like to see reinforced by closer, more personal, more passionate acting.

Though Darrah’s generally fine production can be improved, it has many and more laudable areas of excellence: some magnificent singing, Mazzoli’s evocative score, Adam Larsen’s amazingly symbolic projections on Adam Rigg’s rustic oceanside set. Vavrek and Mazzoli combine to make BREAKING THE WAVES a compelling, commentating tale of love, devotion, and individuality in the face of rigid societal strictures predicated upon piously observed religious principles.

Themes combine in endless permutations that put love, joy, obedience, religion, sexuality, relationship, and prayer on blurry but definite lines. As fans of von Trier’s movie will remember, after a crippling accident Jan requests Bess to have sex with multiple men and tell him about the experience.  BREAKING THE WAVES has been strong, flaws allotted, until the point when Bess takes one of Jan’s requests to heart. Once she begins obeying him and resorts to new and more unusual avenues of prayer, Mazzoli’s music redoubles its evocative wall of sound, Rigg’s set explodes with Larsen’s literal and imaginative graphics, and Duffy goes from a performance that has required subtlety at times to a tour de force that has you waiting to explode into “bravas” when she lands on srage for her curtain call.

By the time BREAKING THE WAVES ends, ironically of course, you are drained from the twists and turns in the story, the juxtaposition of pressing, important themes, and the care you have come to have for Bess. Read the full review >>>