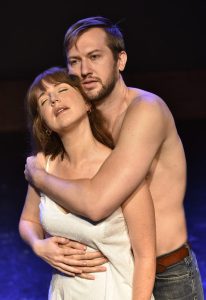 Jason Robert Brown has a unique way with lyrics. Several of his songs begin by wallowing, more artfully and articulately than most, in the modern trend to tell stories and forward exposition rather than express or underscore emotions. Then, mid-song, Brown’s lyrical stream changes. A theme emerges, and Brown proves as capable as Hammerstein, Berlin, or Gershwin at evoking imagery and creating poetry that pleases the ear and establishes the desired perspective. A list of experiences or events ascends into the picture of an ideal that is usually worth waiting to hear. Especially when sung by the elegant and text-conscious Elisa Matthews, a performer whose pure tones and keen understanding of what she’s singing can make any song a delight.

In the Media Theatre production of Brown’s THE BRIDGES OF MADISON COUNTY, with a book by Marsha Norman, Matthews is joined in vocal beauty and dexterity by Derek Basthemer. Together they make a nucleus for Jesse Cline’s atmospherically moody production that carries the musical through romantic and mundane passages with equal aplomb. Except for the ending, which I think is, unlike Brown’s lyrics, too determined to conform to ’90s irony than to let the reader/audience have romantic satisfaction, Robert James Waller’s best-selling book provides Brown and Norman with a gripping story reminiscent of romances throughout literary history while having the virtue of bringing you back to reality in a way that allows you to live the lead character, Francesca’s, dilemma as she faces and considers it.

The plot of THE BRIDGES OF MADISON COUNTY is a well-crafted reward, and Norman knows how to make it come alive on the stage, as does Cline and his cast. Francesca is a woman who has been transplanted from Naples to the rural center of Iowa. She has adapted well to her new soil, mainly by not pining too much for the culture, beauty, and bustle she left behind in Italy, the duties of family and farm more than filling her time and, for the most part, fulfilling her existence. Francesca, via Matthews, sings eloquently about her personal experience, Matthews weaving a spell with “Bridges’s” opening number, “To Build a Home,” a song with the paradigm I describe above but which takes to poetic soaring quickly and elicits immediate empathy and majesty in Matthews’s rendition.

For 18 years, from the end of World War II when she meets the G.I. that takes her to flat, landlocked Iowa from the gorgeous Vesuvian region where the Tyrrhenian meets the Mediterranean Sea, to 1963, when we meet her, Francesca has sublimated her need for culture, sketching, and making mozzarella for an appreciative audience to tending to home and chores. Rather than bring some Italy to Osceola, Francesca has become an Iowan. You can see her physical journey from Naples to Iowa in one of the best sets of visuals Jesse Cline, who is given to using projections, has ever assembled. They show Francesca’s trek from war-torn Naples, among the most damaged cities in World War II, through New York, South Bend, Chicago, and so forth. Cline’s slides reflect the time period of Francesca’s travels, so several skylines look different from today.

An awakening comes when a stranger, a photographer for National Geographic, comes to Francesca’s door while her husband, Bud, and her children, are away at the Indiana State Fair, where the daughter has an animal competing for Best Steer. The photographer is looking for a covered bridge he can’t find, and Francesca takes him there by driving with him, she using the time he takes to capture the bridge on film to sketch it in pencil, drawing and painting being among activities she sacrificed to be a Midwesterner.

The rest proceeds in the way of age-old storytelling. Robert, the photographer, is different from anyone Francesca knows or is likely to meet in Osceola where big doings mean getting ice cream in town. He has travelled the world, including to Naples, where he took and published pictures of the exact war-torn streets from which Francesca escaped. Francesca makes it clear she wanted to leave and would have fled Naples whether the G.I. came along or not, though not perhaps to the American corn belt. Rather than boy meets girl, lonely drifting man meets discontented detoured woman who is feeling incomplete and nostalgic in his presence.

Matthews and Basthemer let you see the romance budding and are best when looks communicate their feeling more than words. Basthemer is a fine singer and conveys Robert’s sincere attraction and affection for Francesca. Line reading is a bit different. Some of Basthemer’s are cold and unpointed, as if he’s saying the words by recited rote, his eyes revealing the context behind them more than his tone does. His delivery slows down some scenes, but It works in another way. It helps to create tension and establishes the moodiness, a good kind of moodiness that has a positive effect on the play, I mentioned earlier. Matthews is more vocally adept and more focused in terms of acting as Francesca. The going may at times be more like a series of tennis volleys than a conversation, but again, the hesitations work in the production’s favor. They seem to give a man who rarely has company in his hectic international travels, and a woman whose talk has been limited to grain prices, cattle, farm matters, and children’s needs, the chance to relearn the verbal part of adult communication, the words being a prelude to the smoldering Matthews and Basthemer each convey clearly.

One of Marsha Norman’s gifts is integrating Francesca’s family life with her romance in a way that makes the former feel like an intrusion only in the way Francesca would experience it, as an interruption in her time with Robert, a necessary-to-accept interval in which she tends to Bud and their children, who call regularly by telephone, as her affair with Robert percolates.

Again, some of these calls seem more cold, abrupt, and dismissive than need be, especially if Francesca is attempting to hide signs of her liaison, as do the greetings Francesca gives Bud and their children when they return from Indiana. The distance, lack of touching, and lack of kisses, at least for the children, is a bit off-putting, even as you realize Francesca has moved on emotionally from her family and home. Iowans may not be demonstrative, but the characters turn their aloofness towards each other into a fault. Whatever the situation, they should look genuinely glad to see each other after nearly a week’s absence.

These are small observations that do not get in the way of a more sweeping picture of love blooming and taking hold. In eye contact and gesture, Matthews’s Francesca and Basthemer’s Robert register as a pair almost from their first conversational exchange in the clearing before the bridge to which she directs him. Cline cleverly illustrates the growing feeling between Francesca and Robert by trading the black-and-white slides he used to show the pair’s journey towards the bridge, to colorful shots of foliage, a la “The Wizard of Oz,” as they make their way back to Francesca’s farm.

The glorious and overriding fact is Matthews and Basthemer make you love this couple and root for them to consummate their affair and consider a life together. There’s a lightness, an easing of their beings that Matthews and Basthemer make equally clear. Francesca and Robert are obvious soulmates whose passion is coupled with compatibility and appreciation for the other’s talents and intellect.

The absorbing part is you want Francesca and Robert to be together even as you retain friendly feelings towards Bud, who shows a needy side and an expectation of marital loyalty as played with dimension by Bob Stineman, and the concern you develop for her children, portrayed winningly by the impressive Molly Sorenson and Gianni Palmarini. It is to Norman’s, Cline’s, and the cast’s credit that you care about Francesca’s family even as you’re hoping she will, for her own sake, leave them. Stineman helps create the allegiance we feel for him, despite thinking Robert is a better match for Francesca, by being so solid and so much a symbol of the kind of man who wouldn’t worry about a wife’s infidelity or flight because he is so rooted in the salt-of-the-earth way of the Iowa farmer, such behavior wouldn’t occur to him. And yet you see that worry and how it affects Stineman’s Bud.

Music helps the romantic care express themselves. Brown’s score is lush and aims towards the beautiful as it gives Francesca and Robert ample opportunities to explain and express themselves, opportunities Matthews and Basthemer seize and turn into intense dramatic and musical gold on the Media stage. Their voices are so good, and their bearings so earnest, they bring you into the moment and allow to share the emotions, new or rekindled, that envelop them.

Cline’s supporting cast is equally adept. You see hurt and concern in Stineman’s careworn face, both when he finally reaches Francesca by telephone and wonders what’s going on that she seems so distant and when he trying to deal with his expressive and warring children, who are the usual province of Francesca. Stineman draws in, his face becoming narrow and hard, as he shows an ordinary man, whose life is regulated by farm business, dealing with marital and parental confusions beyond his ken, habit, or expectation. Palmarini does a fine job in conveying Michael, the son’s, mild but tangible rebellion as he figures out what he might do to withdraw from the farm and live another kind of life, perhaps one of vegetarian who would not value a prize steer. Sorenson repeats the natural presence she exhibited in Cline’s production of Brown’s “Thirteen” at the Media this summer, a natural presence that makes it perfect casting for her to play Matthews’s daughter and that reveals an excellent way with lines and song lyrics.

Faith Yesner made me laugh out loud in the Gladys Kravitz-Ethel Mertz role as the snoopy next-door-neighbor who surveys Francesca’s garden, several hundred yards away via binoculars, spies Robert’s truck there as night approaches, and wonders about the length of his stay there. Yesner is also excellent in a scene in which her character, Marge, asks her husband, Charlie, what he would do if she had an affair with an out-of-towner, status enough in Osceola to render a person exotic.

The best part of Marge is she’s not judgmental. Nothing big or special is made of it, but it’s heartwarming and truly moving when Marge just shows up with a complete and fully cooked dinner on the day Bud and the kids return from Indiana. You see immediate signs of empathy and neighborliness that don’t need a spotlight to convey their humanity and fellowship.

Nick Saverine is cleverly nonchalant as regular guy Charlie who sweetly puts up with Marge’s grilling while having the content look of a man who doesn’t have to worry. Marissa Wolner makes the most of a show she does as a night-club performer to kick off Act II.

Loveliness and tenderness that breaks through the surface coldness are the hallmarks of the Media’s production of this delicate but sweepingly romantic musical. Atmosphere, mood, and the sincerity of eye contact triumphs over a dodgy reading or two. You are definitely drawn into Francesca and Robert’s world and revel in being there. Kudos also to Christopher Ertelt and the excellent Media orchestra. They enrich Brown’s already generous score. Read more on Neals Paper >>>