The back streets of Kensington may not have much in common with the popular perception of Hollywood, California, but as John Rosenberg will tell you, life in the L.A. acting scene isn’t all glamour and glitz either. As a kid growing up among Los Angeles actors, Rosenberg experienced the gritty underbelly of the California dream. His mother was a drama coach, and throughout his childhood and adolescence he was surrounded by the real-life dramas of her acting students and friends. 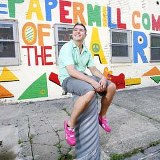 These experiences formed the background for California Redemption Value, the first full-length production by Kensington’s newest theater company, Hella Fresh Theater. “It’s all based on my family,” says Rosenberg, who wrote and directed the play. “It’s about five people — based on me, my sister, my mother, and two of her students — marooned in a one-bedroom Hollywood apartment and all the lying and crazy sh*t that went on.”

Situated in a former paper mill on a side street in run-down section of West Kensington, Hella Fresh’s newly built space, Papermill Theater, provides the perfect setting for this comedy of perfidy and pretense in a dysfunctional L.A. family.

As California Redemption Value opens, the characters are coming to terms with the revelation that one of them lied to the group about having AIDS. But don’t be fooled by the subject matter. “The play’s tagline [“AIDS, Suicide, Murder: In California saying it is as good as doing it”] sounds really heavy,” Rosenberg explains. “But although it’s all personal, it’s really a comedic celebration of the redemptive powers of lying.”

The play’s first act was performed as a stand-alone short in Hella Fresh’s inaugural production, Cheap Guy Hall of Fame, Class of 2010, staged as part of the annual Live Arts and Philly Fringe. The five-play showcase received rave reviews from the Inquirer and other publications and Rosenberg’s fresh voice and edgy comedy marked him as one of the standout writers of the 2010 festival.

In his capable hands, issues as sensitive as 9/11, the Iraq War, murder, and infidelity became launching pads for seriously funny explorations into the psyche of “cheap guys,” a California term for “tasteless, trashy douche-bags.” Rosenberg’s characters may be unsympathetic and their incivility may go unpunished, but they never come across as anything other than real people. “In writing, I try to understand what drives and motivates people, even when they’re doing things we’d all condemn,” he says.

Rosenberg co-founded his first dramatic company, Sleepwalkers Theatre, in San Francisco in 2006. The group had established itself as a cutting-edge producers of original work by the time Rosenberg left the company to form Hella Fresh with his longtime girlfriend. After a couple Bay Area productions, Hella Fresh relocated to Philadelphia last year when Rosenberg and his partner moved here to be near her family.

Rosenberg cashed in his retirement fund from years of non-profit work in San Francisco to build and outfit the 50-seat venue at the newly established Papermill Community of Artists near Somerset El stop in Kensington. The Papermill Theater is part of vibrant arts center with four floors of studio space available for artists, dancers, and actors above a large art gallery and the intimate theater. In addition to the cheap rental rates, each resident artist donates several hours a month to artistic outreach in the surrounding community.

“So far the response from the community has been great,” says Rosenberg. “It’s exciting to stake out a new place on Philadelphia’s theater circuit.” Rosenberg has been impressed by existing diversity of his adopted city’s drama scene. “There are a couple great companies in San Francisco, but it’s remarkable how theater is such an ingrained part of Philadelphia culture.” At the Papermill Theater, Rosenberg hopes to bring this love of plays to new audiences. “I want to do champagne theater on a beer budget, which should feel right at home in Kensington.”
—
California Redemption Value runs January 15th through February 6th, at 2pm on Saturdays and Sundays. Tickets are $10. The Papermill Theater is located at 2825 Ormes Street. For tickets and more information, email hellafreshtheater@gmail.com or visit CaliforniaRedemptionValue.blogspot.com.