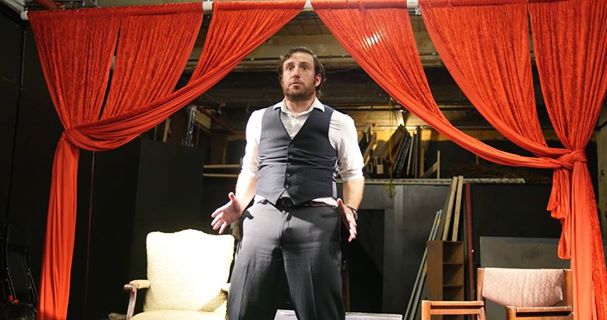 Albert Camus once said, “Although the absurd teaches us nothing, it is an ultimate form of progress.”

Progressive absurdity was certainly evident in Yoel Wulfhart’s Cat-a-strophe at Kensington’s Peppermill Theater, just a stone’s throw away from the Somerset stop on the Market-Frankford El line. The action begins when five actors, 3 men and two women introduce themselves while working out in a gym. The sense of the absurd grows as we hear their condensed bios and learn what they want for themselves when it comes to love. What do these characters want?

Klutzki (Doug Cashell) wants to lose belly fat and his dough boy look although he can’t seem to do that. The exercises he regularly engages in at the gym seem to build fat rather than get rid of it. The absurdist gym works in reverse, and he’s close to throwing in the towel. Peckerstein (Josh Kirwin) on the other hand, doesn’t have to exercise because he has a lean and mean body that inspires envious quips like “You’re as thin as a rail. Are you sure you’re not sick?” Klutzki is the consummate nerd by the way: he’s loud, clumsy and overreacts to everything while the silver-tongued Peckerstein (with his bed hair and James Dean pout) doesn’t have to do much to be praised and admired.

In the gym scene, Pussika (aptly played Samantha Solar) is jumping rope to work off some excess ass blubber, all to no avail of course. Pussika wants to be perfectly beautiful like Beaver (Taiwo Sokan) the play’s buxom sexpot. All Beaver has to do is to show some cleavage and wiggle her hips, and the men come running like desperate praying mantises eager to have their heads bitten off.

It is into this cruel, farcical world that these five characters have been thrown into against their will. Even CAPPuccino (William McHattie), the café manager who serves each of the absurdist characters coffee, orange juice and croissants, tries to make the most of his absurd existence. CAPPuccino is the play’s go-between, a unifying force that enables him to move among the dramatic ups and downs of the other characters. At first CAPPuccino appears aloof and detached from the mania all around him but in time he too falls into the absurdist obsession that locks all of the men in its grip: the love of carpets.

Carpets in all there diverse and universal splendor: shag, minimalist, Oriental, even the long, narrow blonde types, doormats and remnants. In Cat-a-strophe, the men bond best when the hot topic is carpets: what do carpets want, how to please a carpet, how many carpets can you do at once? The not so secret reference here refers to women, of course. Indeed, a lot of ACT 1 is one gigantic Manuka Honey Drop homage to… … carpets. so much so that a third wave feminist in the audience might be inspired to douse the actors with vats of potato salad, but that would be only another absurdist act, wouldn’t it?

Klutzki is one of those verbose guys who exasperate everybody he comes into contact with. He’s always having some kind of emotional melt down. Cashell is a good actor who has the Klutzki personality down pat. He makes you believe that he is Klutzki.

What’s predictable here is that the sexiest characters, Beaver and Peckerstein, hook up and become a couple while Klutzki, who’s about as sexy as a No. 2 pencil, pulls his hair out. He wants Beaver; he wants a top drawer carpet despite his lousy pencil status.

Sokan, as Beaver, is a natural, especially when she says she has an ass “like the Khyber Pass.” In Cat-a-strophe, people are reduced to their value as sexual meat. A sexologist (or humanist) might call this sexual objectification. The Khyber Pass remark, for instance, sends all the men on stage, including the heretofore relatively staid CAPPuccino, into paroxysms reminiscent of a teenage circle jerk. CAPPuccino, out of character, belts out a Sondheim like tune about what else—Pussy! Have these men lost their minds? Of course they have, and that’s what’s funny about this play. .

While all this is going on, the overbearing Klutzki asks why he can’t have what Peckerstein has. The grass is always greener on the other side of the hill. Even the lonely Pussika can’t seem to find a man, no matter what. She may not be perfect (that fat ass) but her needs are simple: a man to cuddle with and take her out for a romantic dinner occasionally. Pussika envies Beaver’s charms and the way that Beaver can flit from man to man in a kind of Pac Man eating frenzy.

While act 1 has some brilliant moments, act 2 explodes with them. It’s here that Cat-a-strophe really shines. There are flashes of Federico Fellini in the masterful wedding scene where CAPPuccino, dressed as a Dominican priest, marries the two couples in a double ring ceremony. (As you might have guessed, Pussika eventually meets Klutzki and the two hit it off. ) McHattie as CAPPuccino is one of the best features of the play. The wedding scene, for instance, is as good as anything I’ve seen at The Wilma. Where act 2 really shows its strength is when Peckerstein describes why his relationship with Beaver has lost its moorings. This is extraordinary stuff, thanks to directors Kevin Fennell and Shenandoah Thompson and Wulfhart’s script.

Cat-a-strophe really needs to be seen twice in order to catch the richly layered and nuanced language. .