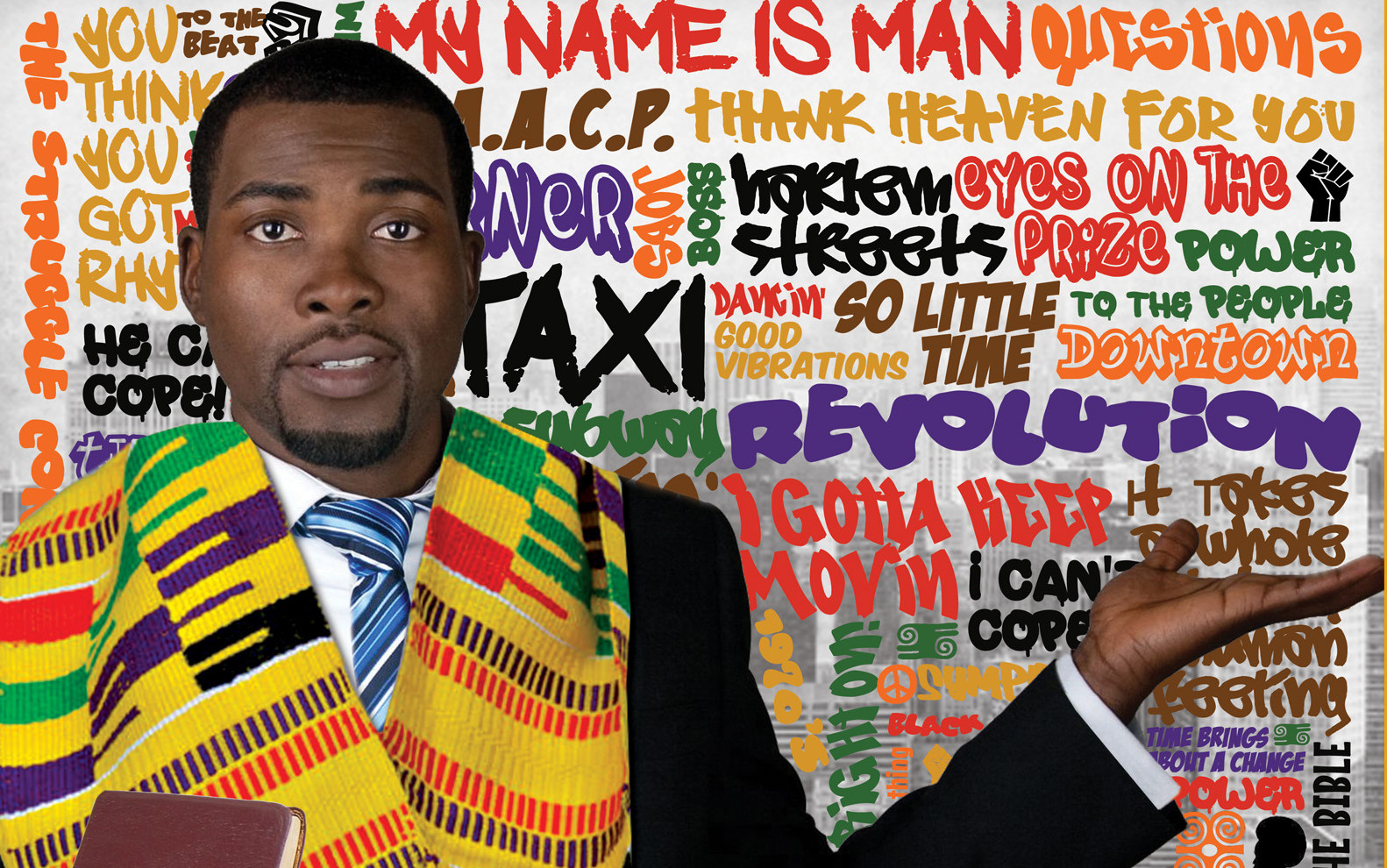 Upon entering the intimate performance space at New Freedom Theatre, I was struck by the sense of localness. The set—which featured a building with broken windows, two large piles of construction rubble, and a worn side panel which bore the name William Penn High School—was a scene that communicated the reality of destruction and displacement in North Philadelphia neighborhoods.

This production of DON’T BOTHER ME, I CAN’T COPE! strikes a raw nerve with many in the Philadelphia community as it addresses the issue of gentrification, and more specifically the issue of institutional buy-out of impoverished neighborhoods. The entire play revolves around the protest of Temple University’s purchase and subsequent demolition of William Penn High School. Many scenes involve picketing and chants, not the least contentious of which were “Hey, ho! Temple’s got to go!” and “Philly’s not for sale!”

The image of people banding together in protest against institutional power recalls the spirit of the Occupy Wall Street movement, though rather than occupying banks and business headquarters, these protesters seek only to occupy their own space, to retain their community in the face of the forces that seek to pull it apart. In line with the times, the play also draws heavy inspiration from the Black Lives Matter movement and comments on the heartbreaking tragedies caused by gun violence.

These are not presented as a cut-and-dry, ‘us vs them’ contentions, however. Under the direction of Rajendra Ramoon Maharaj they are explored as complicated and multidimensional issues. For example, a huge turning point in the play is when a young woman in the ensemble reveals that though she is against the university buy-out swallowing up the neighborhood, she will attend Temple to “find answers.” This blurring of lines is echoed by the cast in real life, several of whom (James Pitts Jr., Danzel Thompson-Stout, and Julian Darden) are associated with Temple—as alumni and future students.

The play, which was first performed in 1972, was the first play to be directed on Broadway by an African American woman. True to its historic roots, DON’T BOTHER ME, I CAN’T COPE! addresses issues of community displacement, gun violence, and feminism. According to director Maharaj, the play’s set, which resembles a construction site, is “an homage to William Penn High School,” which was purchased by Temple University in 2015 and torn down to make way for a new athletic track.

At its core, DON’T BOTHER ME, I CAN’T COPE! is humanizing. It shows the everyday struggles of the characters’ self-proclaimed “ghetto life,” simultaneously as individual stories and as universal struggles of the black community. This powerful effect is furthered by the fact that none of the characters are named. Instead they act as an ensemble of Philadelphians, identifiable only by their character’s role, i.e. Waitress, School Boy, Street Dancer, etc.

The cast wowed the audience with incredible voices—texture, range, technique, and projection were top notch—and the dancing added authenticity and energy to the performance. The many styles of song and dance included break dancing, blues, step, hymnals, African tribal, jazz and soul, ballet, and even spoken word. Again, through the music and choreography, the community is presented as a combination of many unique identities coping with the same issues.

Several of the play’s most impactful lines were delivered through song. The ensemble celebrated “the joys and strife of ghetto life” in a smooth tune set to jazz-style high hats. This transitioned into the blues, with a cast member’s tearful realization that “you can’t be disappointed when you’re disappointed all the time.” The ensemble does not dwell on despair however, and moves on to an uplifting number declaring “time brings about a change,” which had the audience swaying and clapping.

While nearly all of the ensemble members possessed powerful voices, some stand-outs were Nicole Stacie, Raquel Mollineau, Tamara Anderson, and James Pitts Jr. Nicole Stacie delivered a fiery finale to the song “So Little Time,” giving me chills and eliciting shouts and applause from the audience. In a moving show of solidarity, a woman in the center of the front row, directly in front of Stacie, stood. She rose from her seat clapping and patted her heart with her hand. Stacie was visibly moved by the gesture and began to tear up, to which the crowd responded with even more applause and supportive cheers than before. In the spirit of the song, she gave a defiant nod and closed the scene.

The production punctuated spectacular musical numbers with scenes of protest. The ensemble, placed at different points in a line across the stage or atop a pile of construction rubble, hoisted signs and strained their voices against Temple U, gentrification, and the ‘profits over people’ mentality threatening their neighborhood.

At times the chanting seemed a bit heavy-handed and hushed the previously responsive crowd into an uncomfortable silence. However, if the director’s intention was to cause discomfort in order to force the audience to reflect on harsh realities—as I suspect it was—then he achieved the desired effect.

Spoken word was put to powerful use in one scene where all male characters joined in a line and slowly advanced toward the audience. Fists raised, they repeated the phrase “Black Lives Matters” with increasing volume and intensity, until they were almost toe-to-toe with those sitting in the front row. They suddenly stopped and lowered their fists, their figures outlined by upward floor lights. With conviction, a young man asserted “I am my own cause and my own effect. I’ve been around for centuries, and you don’t know me yet.” Answered by a chorus of “amen” from the audience, the scene instilled hope with another young man’s determined assurance, “I’m headed for places I’m long overdue.”

Now celebrating its 50th anniversary, New Freedom Theatre is one of only five African American theaters in the United States and was founded in 1966 with the support of the Black People’s Unity Movement. Its mission is to emphasize African Americans and their very significant contributions to the whole of American arts and culture through artistic excellence.

New Freedom Theatre’s production of DON’T BOTHER ME, I CAN’T COPE! delivered tough medicine. By identifying issues of gentrification and gun violence, the play forces us, as Philadelphians, to take a long hard look at the ways we treat fellow human beings. As I left the theater the question that stuck with me was: Is it progress if it displaces those who need help the most?

I applaud director Maharaj’s commitment to depicting the reality of North Philadelphia’s fight for William Penn High School. Though the play is very serious in nature, it delivers a positive vision for the future and resolves to “change our children’s history books” so that the next generation doesn’t have to cope with the same issues.

One Reply to “DON’T BOTHER ME, I CAN’T COPE! (New Freedom): Occupying our space, a community’s fight for permanence”