Upper Darby Summer Stage is one of America’s oldest and most successful theater programs for young people. It’s the center for theater arts with a huge performance program in the Greater Philadelphia area, and has trained thousands of students (ages 11 to 28) since 1976. Quite a few of the participants became actors, directors, playwrights, dancers, choreographers, musicians, teachers, and professors.

The immensely popular Summer Stage performances take place at the large Upper Darby Performing Arts Center, on one of the finest stages for miles. The venue seats 1,650 people and attracts more than 60,000 audience members each year in often sold-out performances. It’s located at Upper Darby High School, the largest in Delaware County, founded in 1895. The high school now enrolls almost 4,000 students with diverse social, ethnic, and international backgrounds. Upper Darby Summer Stage is jointly sponsored by Upper Darby Township Mayor and Council and the Upper Darby School District Board of School Directors through the Department of Recreation and Leisure Services.

Thanks to the quality of its work in over four decades, Upper Darby Summer Stage has become one of the country’s most successful youth theater programs, offering professional training at all levels and affordable family-friendly entertainment during all seasons of the year. The attendance by people of all ages has made Summer Stage “a model for communities across the nation.”

Inspired by her time as a student at Upper Darby High School (and an active participant at Summer Stage), alumna Tina Fey wrote the movie comedy Mean Girls. In her New York Times bestseller-listed Bossy Pants, she devoted an entire chapter to Upper Darby Summer Stage, entitled, “Delaware County Summer Showtime”: “All names in this story have been changed to protect the fabulous!” She also described Summer Stage as “a fantastic program that continues to this day, and I can’t recommend it highly enough.”

Summer Stage was founded 41 years ago by executive and artistic director Harry Dietzler, when he was a young 20 year old drama teacher.  Every summer the wide-ranging programs attract hundreds of participants for programs on stage and behind-the-scenes at the Upper Darby Performing Arts Center.

Over 32,000 tickets are sold each summer, with many of the shows selling out. Over 720 young people, age 12 – 28, participate in the various Summer Stage programs each year. The students live throughout the Delaware Valley, not just in Upper Darby Township. Summer Stage presents a Mainstage show plus six unique Children’s Shows—all within six weeks. 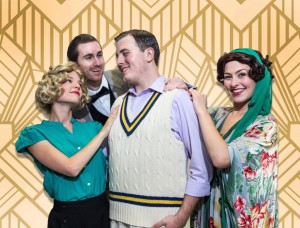 The entertaining Gershwin farce is directed by Brian Walsh, choreographed by Mandie Banks and Kevin Dietzler, under the music direction of Gina Giachero. Lighting design is by J. Dominic Chacon, sound design by Amanda Hannah, set design by Timothy Bruno, props design by Patrick Ahearn, costume design by Julia Poiesz, with a huge cast of 45 actors, singers, and dancers—not to mention the orchestra of 15 musicians and the production crew of 22 members—all being stage managed by Chris Donnay, under the production management of Christopher Luner. Its star, Wesley Hemmann as the naïve but loving Jimmy Winter, and the entire cast all are so good that the audience left the theater happy and highly animated.