As part of SoLow Fest 2016, former Phindie theater editor Julius Ferraro presents the third iteration of his one-man psychological office cockroach drama MICROMANIA. The work “explores the human obsession (fear?) with the tiny, inconsequential, and useless. Trapped in the abominable TeamWorkShop with no tools but their minds, three coworkers will escape only by ridding the office of an (imaginary?) infestation. Will they fall prey to the infernal machinations of this mellifluous influence?”

We got the SoLow down on this compelling original piece from writer/actor Julius and director Dani Solomon. [Headlong Studios, 1170 S. Broad Street] June 16-21, 2016. 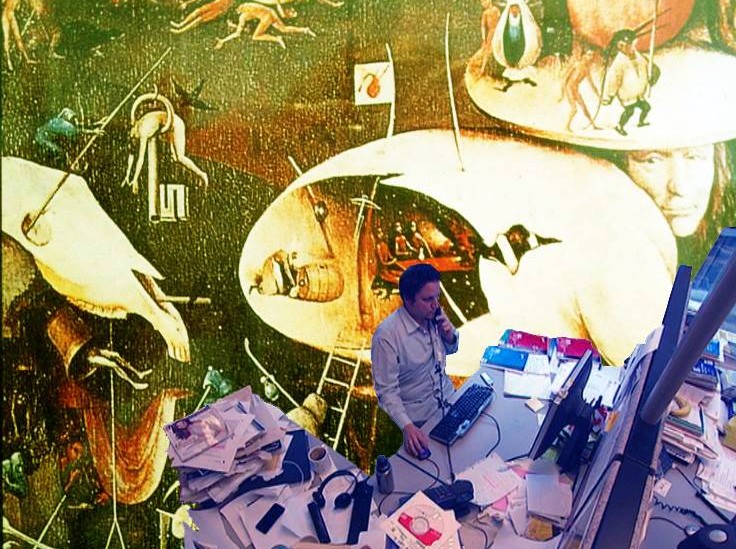 Julius Ferraro: So the play started out as a short story that a friend of mine, Robert Gross, suggested that I stage word-for-word. I think the original story was really a reaction against my work environment—I was working at a bank in the burbs, isolated from any community that I really was interested in. I was appalled and demoralized seeing banks going back into risky loans less than a year after the housing bubble burst, but more significantly, basically I felt oppressed by the language of sales and the obsession with growth.

The concept that if you are not growing, you’re shrinking—that’s central to the thought in this piece. We take it for granted that we must always be growing—in all senses of the word, growing financially as a business, or growing personally as an individual, maturing, getting better, increasing our skills. That’s obviously not a pattern that can continue forever, but there seems to be no intentional release valve. You consume or you are consumed. What’s the alternative? What happens if you do shrink? Is that so bad? I diagnosed the whole world with macromania – an obsession with getting bigger—and began to explore, well, the opposite.

Phindie: So it’s not about living with a micropenis?

Phindie: Nothing… Have you ever had a real roach problem?

JF: When I was a kid I got used the fact that if you aren’t seeing them, that doesn’t mean they’re not there. We lived in an old house, on an old block of row homes in Northeast Philly, right across the street from a cemetery. So my parents were really clean but there was a basic pattern of seeing a roach every few days, or something else, and in the summer there’d be somewhat more of them. Sometimes the whole block would get infested and everyone would look at whoever had moved in most recently and be like, that person is dirty, they brought their bugs with them.

Phindie: Yeah. We need more walls… This is not the first time you’ve done the show; how has it evolved?

JF: I can’t say enough about what various directors have brought to the show. It was first directed by Robert Gross, the same person who said it should be a play. He’s a friend but also my mentor from college, and he has a lot of genius. Robert is unlike anyone in Philadelphia that I’ve worked with thus far in the way he deals with the interior lives of characters. He really can bring a performer, line by line, into an incredibly specific understanding of a role. When Manon Manavit directed it last year we were busy with other stuff, we probably only had about five rehearsals on it but even that small amount of time added an incredible amount of depth to the physical world. Manon, sort of the opposite of Robert, is a super daring and insightful physical director, and she helped fill in some gaps.

This time it’s different, though. Dani is challenging almost every preconception I bring into the piece and we’re looking for new meaning and new shades of character. I’m really bad about this, I think—the original performance still pretty much lives in me. But I’m trying to let go, and we’ve found some really exciting stuff, especially the ways the characters are affected by the world around them.

I keep doing it both because it’s a deeply psychological play—I believe there is always something new to find, and there’s a lot of ambiguity—but also because it’s simply a joy to perform.

Phindie: Dani, what have you brought to this iteration?

Dani Solomon: I came to this version with totally fresh eyes never having experienced the previous iterations. I was interested in defining a framework for the storytelling as well as balancing the denseness of the language with physicality and spacework. Even in our earlier conversations about the piece, I knew I wanted to put it inside an actual office and use the limitations and opportunities of a specific site like that to inform other decisions around design and even character.

DS: SoLow Fest is a celebration of the realities of artmaking. All it takes to do a SoLow show is an idea and time. It’s the one space in the theater community that emphasizes the DIY, that productions don’t necessarily have to be production-heavy to ask interesting, useful questions through performance. It’s a space to do that ridiculous idea that may not have otherwise seen the light of a spot because it wouldn’t garner enough ticket sales, or it’s outside of whatever is your “normal.”

The other thing I love about SoLow is this pay-what-you-can element. I think there’s this tension between making our work affordable and paying artists a decent wage. It’s easy to conflate and confuse these things even though the cost of a ticket never really comes close to the covering the cost of production. But because production costs are so low in SoLow ;), a lot of times artists end up making a little cash while also making the work accessible to any income level. It’s a wonderful setup where artists can try out a boundary-pushing provocation with a willing audience, without the expectation of it being a polished, expensive thing.

JF: Eat. Umm, I dunno. What kind of a question is that? Obviously it’s watch Netflix.

DS: Cooking experiments. I like cooking with other people, too. But when I cook by myself, I don’t have to worry about the final thing being edible. I can take risks because in the end I’m only starving myself if clove, cayenne, and cocoa don’t work together. Spoiler – they do, but be gentle with your clove hand.

Phindie: Are you excited by any other shows in this year’s SoLow festival?

JF: So one thing that’s fascinating to me about watching SoLow over the years is seeing how it responds to its own growth. It’s taught me that there are things that an organization can do to control its own structure, and things it cannot control. Popularity and growth, especially with a festival, are largely outside of control. SoLow has done almost nothing to attract new performers except be itself, and look at how quickly it’s grown. Fringe has navigated growth in a very particular way, and SoLow will do the same thing.

Right now, there are so many shows and I’m so busy that I basically skim through to find people I know. SO I want to see Ben Grinberg’s show, I want to call Mike Durkin’s weird phone line; I want to see Living a Making (Kat J. Sullivan’s dance), the show Brenna Geffers is directing at Curio, and Rejected Thoughts, Mira and Irina’s show. Oh, and Jack Tamburri’s play. That’s a lot and I certainly won’t make it to all of them.